‘Call of Duty: WWII’ Is An Explosive Return To The Game’s Nazi-Killing Roots

We reviewed the hottest new war game on the planet. 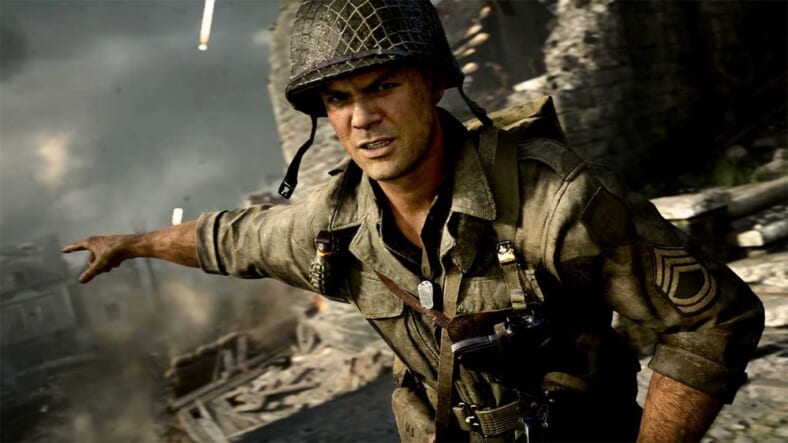 One thing is for sure about Call of Duty: WWII; it’s a Call of Duty game. That may sound ambiguous or obvious but long-time fans will understand exactly what I mean. COD: WWII checks all the boxes of a series that is now 14 games deep.

The return to its roots, the Nazi enemy, the zombie mode and the multiplayer that’s meant to keep gamers coming back have all come across intact in a way that actually feels more like a reboot than anything brand new or fresh. Still, if you’re looking for your COD fix, COD: WWII will certainly scratch that itch. After digging into the game myself, here are the highlights from the latest entry in the franchise.

The eight-hour-ish campaign carries all the hallmarks that we remember from the series’ beginnings, when the first three games all revolved around the Nazis as enemies. A rag tag bunch of heroes fight through the European warzone to save the day in the name of freedom, eager to get back to the girl they left behind, chiding each other with locker room jokes along the way. That plot, fleshed out with very good voice-acting, paves the way for larger action set pieces and plenty of cannon fodder along the way.

There are, without a doubt, memorable moments–think tank battles and the unusual playable character – and, as expected, the gameplay is always tight, fast and somewhat unforgiving. It doesn’t take much reckless run-and-gunning before you’re toast but the checkpoints are generously placed and minimize frustration. Unexpectedly, what really makes gameplay feel different is Sledgehammer Studios’ handling of the health and ammo systems, both of which you rely largely on your squadmates to provide. The end result are levels that require a fair bit more strategy to clear than you may be used to from COD games and it’s a welcome extra layer.

Admittedly, we didn’t get to dive as deep into this as we would’ve liked since servers only came online hours ago. That said, our first impressions may not line up with the long-haul of COD: WWII’s competitive online play, mostly because the community will eventually dictate if this mode becomes a thriving arena for players to fight to the death for months (or years) to come or if these levels are a desolate virtual wasteland, populated by only the most dedicated fans still answering the call of Activision’s duty while everyone moves on to games like the upcoming Battlefront 2 or revert to games like Battlefield. What we saw at the outset was heartening, if more limited that we’d prefer.

The new war mode, reminiscent of the the large-scale, shifting-objective battles found in recent games like Halo 5 and Battlefield 1, tasks players to work as a team and play their role to attain success across three maps. The old, trusty death matches also return, still rewarding players for good technique and mastery of combat fundamentals, across ten maps. That may seem minimal for a game where the online multiplayer is relied on as an anchor to keep players returning but Activision does keep maps coming on a rolling basis to keep it fresh. Sure, we’d like more out of the gate but we rest assured knowing that more are coming to continue feeding our WWII bloodlust.

Now an integral component included with each annual COD game, zombie mode may actually supplant online multiplayer as the reason to keep returning to COD: WWII after you polish off the campaign. The return of COD’s signature hoard mode this time is curated by members of the team that gave us Dead Space. The zombie mode comes off a little drab if you’re playing solo but recruit a friend so you can tackle it together and it becomes a shining gem of COD: WWII, where frantic and desperate moments become the norm and the action never stops. Full disclosure; we’ve loved COD’s zombie modes in the past to a potentially unhealthy degree and it seems that COD: WWII has very likely rekindled our love of the novelty-turned-staple mode.

There’s still a lot of Call of Duty: WWII that we need to explore, especially once all the fans are finally unleashed into its revisited world of the European continent. For the moment, COD: WWII is exactly what we expected it to be and that’s not a bad thing but it’s not dropping our jaws either. The game definitely delivers what fans of the series want and expect of their annual outing, almost like the Madden series where each year is a predictable baby step forward.

Credit where credit is due, COD: WWII still holds an edge over sports franchise video games but, as the series continues its march forward as a yearly outing, we can’t help but feel that edge diminishes each year and it’ll only be a matter of time before COD: 2K19 becomes a reality. Until then, we’ll savor the glimpses of innovation Activision still packs into their cornerstone franchise and enjoy the shit out of the eight-hour campaigns they throw at us. And then we’ll kill some more zombies.

Call of Duty: WWII is out now.