Sometimes, public humiliation is totally worth it. 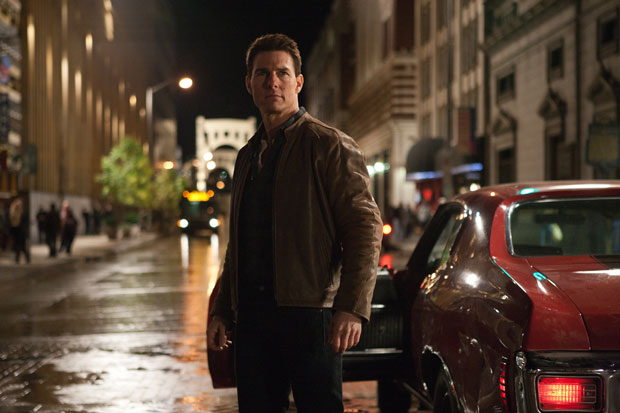 A few weeks back, we offered you guys the chance to win the actual jacket worn by Tom Cruise in Jack Reacher, as well as a copy of the movie on Blu-ray. All you had to do to enter was send us a story about an embarrassing time you met a celebrity. And oh boy, did you deliver. The winner is below, but before that, we’ve also included a selection of the runners-up because when they involve Alice Cooper, Kristen Stewart, and Elvis, how could we not?

I proposed to Kristen Stewart in front of 7,000 people at the last Comic-Con. She said, “That’s a heavy question.” Everyone laughed at me while I tried to provide the ring pop I had with me. The security almost tackled me to the ground as I approached the bench. Also, a NY Times photographer captured it all. My boss found me with a “Marry Me Kristen” sign on the front page of the NY Times Comic Con slide show. Soon after, everyone I knew found out about it via social media. Pretty embarrassing.

My most embarrassing moment in front of a celebrity was when I used to ride bulls in a rodeo – we were in Jerome, ID, and my ride was coming up. I always stretched in weird ways, such as taking my whole free arm (opposite of the arm holding the bull rope) down to the ground and throwing my elbow all the way back around behind me as hard as I could. As I was doing this, unbeknown to me, Ty Murray and his now-wife Jewel were walking behind me. I cracked him right in the mouth with my elbow with a force that should have knocked a mule out cold, and it seemed like the whole world just went silent, but he didn’t even hardly flinch. I seriously thought he was out cold, but he just did not fall. When I realized he was still awake and his hands came down from holding his mouth, there was so much blood. I was waiting for him to return the favor, but he looked at me and smiled, and when I heard the next thing that came from his mouth, I could not believe it. He started apologizing to me for hitting my elbow with his mouth! I was so nervous that I just blabbered and then they just walked away like nothing ever happened.

I was lucky enough to meet Alice Cooper, one of my absolute rock heroes. However, when I got close enough to ask for an autograph, I froze! I started stuttering when he said hi, and I had such a panic attack that my response was, “However, autograph?” He chuckled at my awkwardness and thought it was cute, but I still don’t feel any better about my nerve-induced reply!

When I was 17-years old, my then-girlfriend and I got backstage VIP passes to a Taylor Swift concert in Philadelphia, PA.  It was my birthday present (with help from her and my parents) to my girlfriend, who was a humongous fan of Taylor Swift at the time.  We had a great time, enjoyed the food, and met Taylor’s band.  When Taylor herself came out I kinda freaked (I always thought Taylor was really hot), and she greeted us and hugged us and all sorts of stuff. Except she didn’t hug my girlfriend, she hugged me and kept on going.  Now, I was sure it was an honest mistake, but my girlfriend took it entirely the wrong way.  She immediately pulls me aside, asks, “So that skinny bitch hugged you? You are MY boyfriend, NOT HERS.” Like I had a chance with Taylor Swift! She started yelling, screaming, stomping, heck she even slapped me a couple of times. By this time everyone was watching, so I finally just put my hands up and said, “You need to calm down.”  And that was it – I’d set off the atom bomb. My girlfriend left the VIP room, flipping me off and telling me that we had broken up. I looked back at everyone in the room, and they were dead silent. Two security guards asked me to go grab my girlfriend and leave the room. After awkwardly waving bye to everyone, I was escorted to where my girlfriend was crying – she wanted nothing to do with me and refused to attend the concert, so I had to take her back to our hotel, and then back to West Virginia (a 9-hour drive back home in COMPLETE silence). So, not only did I have an embarrassing moment in front of Taylor Swift, my girlfriend broke up with me in front of her. Let’s see Taylor write a song about that.

I don’t think this was as embarrassing to me as it was for my mother – I was really young, young enough to be in a stroller, and my mother found out that Elvis was filming one of his movies at the beach near our house. So she got me ready and we were off to see Elvis! My mother at the time was a smoker and, of course, I was not the center of her attention while Elvis was on the beach shirtless… I decided to go through her purse and get into the cigarettes. There I was, not caring who Elvis was, breaking these cigarettes one at a time. I catch the eye of Elvis, and he walks over to tell my mother what I’m up to. She was just so excited and dreamy eyed, until she realized what he was saying, looked down, and there I was, tobacco everywhere. She got red as a tomato because she felt like the worst mom, but he gave her an autograph and it made it all better. So it really wasn’t me getting embarrassed, but it was pretty embarrassing to my mom…

AND NOW: THE WINNER!

Saved By The Mullet

In the summer of 1995 I had just turned 12 years old and I loved sports, especially football, but at this stage in my life I never could have told you any of the players’ names, respective teams, or anything about them for that matter. During this same time one of my favorite shows – and this is what I should have been embarrassed about – was Saved by the Bell: The College Years. So when I got on a plane headed for California to go stay with my older brother, I immediately recognized the guy who was sitting in the row just behind mine: It was Bob Golic (although I had no idea what his name was in real life, just that his name was “Mike Rogers” on Saved By the Bell). I had zero fear at this stage in my life, so I turned around and said, “Hey, aren’t you on Saved by the Bell: The College Years?” He obviously didn’t like being recognized for his role on the show rather than his other accomplishments, because he replied, “Yeah, and I also played a little football… maybe you heard of that?” I politely answered “No,” then turned back around. He engaged me again and said, “Well, I guess you must want an autograph?” Now with everyone in the immediate area looking on I actually felt embarrassed, and quickly snapped a, “No thanks.” Everyone around me started clapping as he sat there stunned! I later learned that his prime in football ended in 1982, and since I was born in 1983, I relinquished any and all guilt about not knowing who he was…

Congratulations, William – you pulled a risky move by having the celebrity be the one to get embarrassed in your tale (and admitting to liking Saved By The Bell: The College Years), but it paid off, since you are now the proud owner of one slightly used Tom Cruise jacket. Pro tip: It’s best enjoyed while watching Screech’s sex tape.

Dog Movie Previews: The Internship, The Purge, and Tiger Eyes

4 Types Of Movies Zombies Aren’t In (But Could Be!)