Colin Kaepernick Pledges $1 Million to Charity While Continuing His Protest 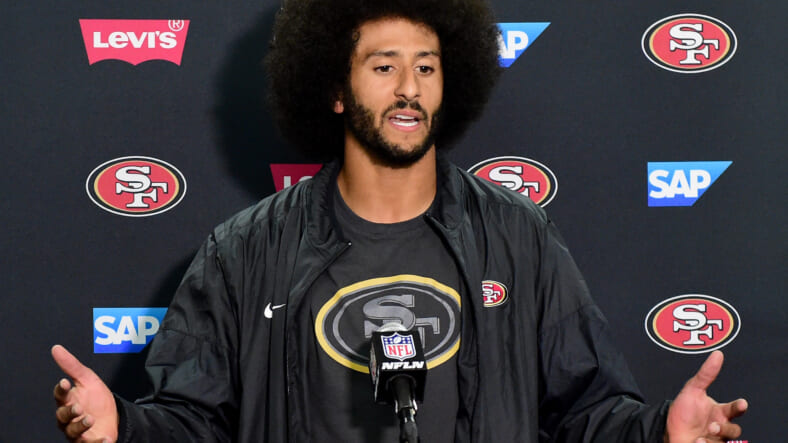 After refusing to stand for the national anthem prior the 49ers preseason game last Friday, quarterback Colin Kaepernick vowed to continue to his protest against police brutality at Thursday night’s game against the Chargers. And while he once again did not rise to his feet for the “Star Spangled Banner,” Kaepernick’s protest looked a little different this time.

For one, he was joined by a teammate, safety Eric Ried. And rather than sitting, both men took a knee on the sideline. That was a well-considered decision made after Kaepernick and Reid met with Nate Boyer, an NFL vet and former Army Green Beret, who encouraged the quarterback to continue his protest but not by sitting.

“We were talking to [Boyer] about how we can get the message back on track and not take away from the military, not take away form pride in our country, but keep the focus on what the issues really are. As we talked about it, we came up taking a knee,” he said. “It was also a way to try to show more respect for the men and women who fight for this country.”

In his post game press conference, Kaepernick, who was branded a “traitor” for his protest, also addressed one of the loudest criticisms that has been levels against him: What, in practical terms, is he doing to help the people affected by the injustices  he’s railing against?

I’m “working with organizations to be involved and making sure I’m actively in these communities,” he said. In addition, Kaepernick will be donating the first $1 million of this season’s salary to organizations fighting for equity.

Another development in this story took place in Oakland, where the Seahawks and Raiders finished off their preseason. As the national anthem was played before that game, Seattle cornerback Jeremy Lane remained sitting on the bench.

“I just like what he’s doing, and I’m standing behind him,” Lane said of Kaepernick. “It’s something I plan on keep on doing, until I feel like justice is being served.