It’s Official: Colin Kaepernick Is the Most Hated Player in the NFL

A new poll ranks the controversial QB beneath accused rapists and cheaters. But does he deserve all that hate? 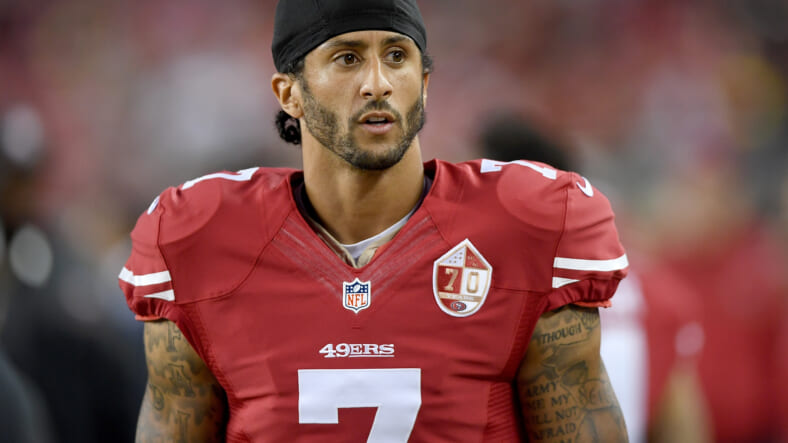 Colin Kaepernick, a backup 49ers quarterback who has ignited a rash of protests across the sports world by refusing to stand for the national anthem, is officially the most detested player in the NFL. In a new survey of 1,100 Americans, 29 percent said they dislike Kaepernick “a lot,” more than any other player.

Clearly, there’s something different about Kaepernick and the rest of these guys and it’s not just that he’s never been accused of breaking the law or football’s rules. He’s also the only one currently fielding death threats.

He’s the only one on the cover of Time Magazine too. The photo of him kneeling on a black background accompanies an essay that defends his actions and attempts to explain his motivation.

Perhaps most importantly, Kaepernick is the only one of the players on that list disrupting the status quo, and not just becuase he’s refusing to stand of the anthem. Kaepernick has inspired hundreds of athletes to follow his lead, from fellow NFL players to high school kids and all the way to the WNBA, where the entire roster of the Indiana Fever kneeled during the anthem before a playoff game Wednesday night.

The entire Indiana Fever team knelt during the national anthem before a playoff game https://t.co/q3UlOcubKv pic.twitter.com/exIECaSIMK

He’s forcing people to confront racial injustice when all they want to do is forget about life and watch sports.

But if you want to know the real reason why Kaepernick is the most hated NFL player right now, you just have to look a little deeper at the survey results. They show that only three percent of black Americans dislike Kaepernick “a lot.” Among whites that number is 37 percent.