Plus, Brie Larson has no idea who won the Super Bowl, and we see Emma Stone like we’ve never seen her before. 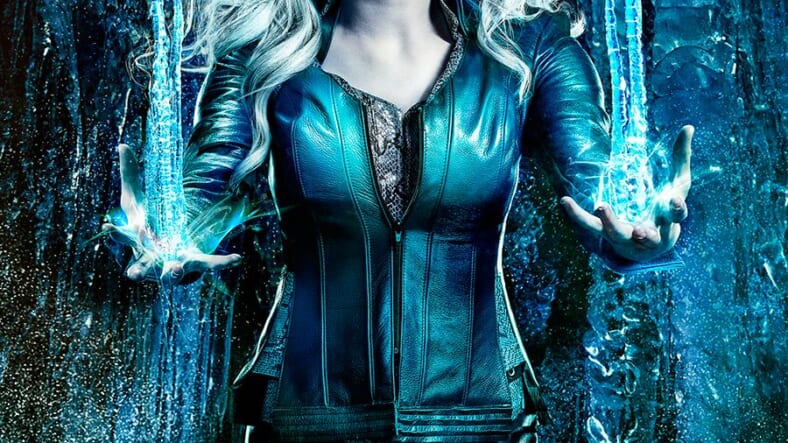 Say Hello to Killer FrostThis Tuesday’s episode of The Flash takes central characters Barry Allen, Cisco, and Harrison Wells to alternate reality ‘Earth-2,’ where everything is similar but different. In this world, up is down, black is white, and mousy scientist Caitlin Snow (Danielle Panabaker) is a treacherous villainness with a heart of ice otherwise known as Killer Frost. In the first promotional image for the episode, we have a glimpse of how cold Caitlin will truly be, decked out with icy blue contacts, a tight leather get-up, and dangerously sharp icicles protruding out of her hands. Watch ‘Killer Frost’ in action on The Flash Tuesday at 8/7c on The CW.

Not Everyone Watches the Super BowlWhen you’re an Oscar-nominated actress, sometimes you’re a little busy to catch one of the most viewed television events of the year. For Brie Larson, not only did she not acknowledge the Super Bowl aired this past Sunday, but she also thought that the ‘Cubs’ came out victorious. “I ate chips, so I feel like I watched the Super Bowl,” she told Jimmy Kimmel. She then exclaimed that they were a nice, orange colored snack from Trader Joe’s. Now, Brie, we’d give you a free pass on missing the game, but Trader Joe’s? C’mon now. Next time, it’s either Doritos or nothing.

A Different Shade of Emma StoneEmma Stone has a brand new do, and we’re totally into it. The 27-year old actress, known for her luscious red locks, was recently seen sporting a head of dark brown hair. Stone, known for her roles in Easy A, The Amazing Spider-Man, and Birdman, is said to be preparing for her role as Billie Jean King in the upcoming Battle of the Sexes, hence the necessary trip to the salon. Doesn’t matter to us though: red, blonde, or brown, Emma Stone will always be one of our Hollywood favorites.