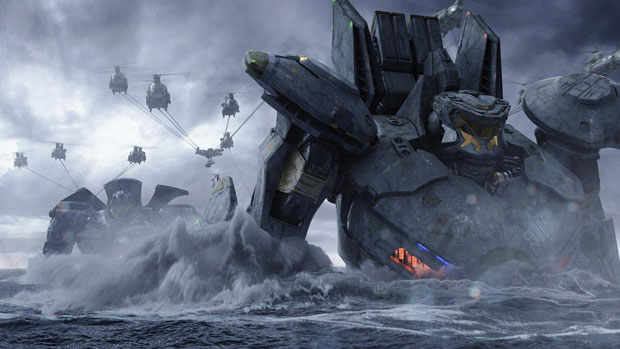 “Well, shit, y’all – this is one huge Goddamn movie. The monsters are huge; the robots are huge; the set pieces are huge; it’s all huge. And it’s non-stop – from the introduction that tells you how humongous aliens are crawling into our world through a dimensional rift at the bottom of the ocean, and how humanity fought back by making massive robots piloted by two people whose minds have been linked together (because a bout of fisticuffs has to be more effective than just dropping a nuke on their heads while they’re still at sea, right?) it just punches, roars, explodes, shoots, smacks, and bangs its way along for the entire run time. I’m not much of a fan of 3D normally, but this was a fun experience, since there’s always some kind of alien guts, sparks, acid sprays or fireballs spewing at the screen. Although If I’m honest, by the time the third vertigo-inducing 3D monster battle was halfway through, I kinda spewed something at the screen myself. Sorry once again to the guys in seats 10H, 11G, and everybody in seats 12E through 12K. I promise I’ll never eat Indian food before a movie again.”

“The first thing you need to know when you go into this one, is that it’s a movie about giant robots that fight giant alien dinosaurs. That’s also the only thing you really need to know. Whatever expectations you might have should all be based on that one sentence, because that is not just the elevator pitch: It is, in fact, the entire plot, script, and finished product. If there are ideas in here that do not involve giant robots punching giant alien dinosaurs, the filmmakers would like to kindly advise you to stop looking at that stuff, because holy shit you guys warrhh robots fighting dinosaurs wooo. And in fairness to them, they’re absolutely right to do this, because to treat the material any more seriously would just turn the whole thing into bad comedy.

“It is, as you’d hope for a movie of this kind, a fun ride. Director Guillermo del Toro has a proven track record of making monsters fun and interesting, and while his practical creations from earlier movies (Pan’s Labyrinth and Hellboy 2 especially) have more heart, no one could argue that the money isn’t well and truly on the screen with this one. Even with the reliance on CGI, however, there are good, smart visual touches here and there: The signs of wear and tear in the pilots’ area of the robot, especially, made it feel like this was a real piece of (admittedly absurd) military hardware, and was a nice change from the usual gleaming sheen of modern special effects. It’s those little touches that show when a director has a feel for storytelling, rather than just flinging stuff at the screen.

“I have to admit to being intrigued by the acting. For such a capable cast (including Sons Of Anarchy’s ever-likeable Charlie Hunnam andThe Wire’s superb Idris Elba), the characters appear very one-dimensional, and I genuinely didn’t know if this was del Toro paying homage to the shonky performances in the monster movies of his youth, or if he just got so distracted by all the effects that he forgot to direct his actors. While it’s awesome to see Stringer Bell himself delivering a rousing speech that actually ends with, ‘We are cancelling the apocalypse!’ it undercuts the sincerity of the moment somewhat when it looks like the actor is trying not to laugh. Other cast members fare better – Always Sunny’s Charlie Day does a great job of being the nerdy, monster-obsessed scientist, and Ron Perlman, as ever, rocks it as a dealer in black market alien organs. (Speaking of which, stick around till after the first round of end credits. You’ll be glad you did.)

“All in all, while this is somehow not quite as much fun as it should have been, it’s still a whole lot better than your average summer blockbuster, and particularly drek from former years like Transformers (which it seems like some people are mistaking this for, thanks to the posters). If you have a single geeky bone in your body, you’ll get a huge kick out of Pacific Rim. After all, it is about giant robots fighting giant alien dinosaurs. What else would anyone need to know?”

Want more? Take a look at the Pacific Rim graphic novel or see 10 other action films that also sound like sex moves.