“I don’t give a f*ck about your career.” 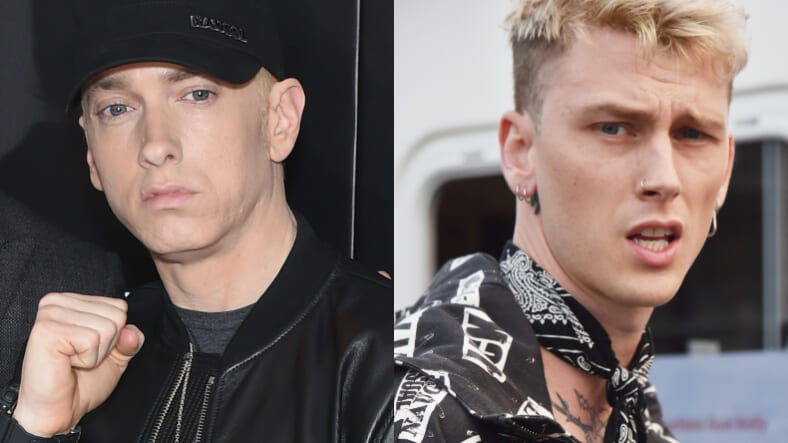 Eminem has Machine Gun Kelly in his cross hairs.

After MGK dropped a nearly five-minute diss track of the self-proclaimed “Rap God” titled “Rap Devil,” Em made sure he got the last word in during an in-depth discussion of his surprise album, Kamikaze.

Before we get to his expletive-filled rant about the younger rapper, here’s a quick recap of their beef: It ostensibly started six years ago when MGK tweeted that Eminem’s daughter, Hailie, is “hot as fuck.”

MGK has stated that those three words lead to him being blackballed by figures in the music industry. They also inspired lyrics to the Kamikaze song “Not Alike,” in which Eminem dares Kelly to make more comments about Hailie.

In turn, MGK released his aforementioned diss track and wrote “FUCK RAP GOD IM THE RAP DEVIL” in all of his bios on social media.

im standing up for not just myself, but my generation. im doing the same shit you did back in ur day. life is still real on my side, and i had to take time from the grind to defend myself from someone i called an idol. love, Rap Devil.

Now Eminem has broken his silence on “Rap Devil” by unloading on the rival artist.

“It never hit my radar and then one day, you know, you go down the fucking wormhole of YouTube or whatever right, so I see ‘Machine Gun Kelly talks about Eminem’s daughter’ whatever right, ” Eminem explained to Sway Calloway in the new interview segment.

He went on to say that the comment about Hailie wasn’t what sparked their battle and that he “doesn’t give a fuck about [MGK’s] career.

“The reason I dissed him is actually a lot more petty than that. The reason that I dissed him is because he got on—first what he said ‘I’m the greatest rapper alive since my favorite rapper banned me from Shade 45’ or whatever he said, right? Like I’m trying to hinder his career,” Eminem said.

“I don’t give a fuck about your career. You think I actually fucking think about you? You know how many fucking rappers are better than you? You’re not even in the fucking conversation.”

Em didn’t stop there. “Now, I’m in this fucking weird thing because I’m like I have to answer this motherfucker and every time I do that, it makes that person,” he said.

“As irrelevant as people say I am in hip hop, I make them bigger by getting into this thing where I’m like I want to destroy him, but I also don’t want to make him bigger because now you’re a fucking enemy. I’ll leave it at that.”

We have a feeling that the MGK-Eminem beef is far from finished.