George Clooney Claims He Cuts His Own Hair With a Flowbee 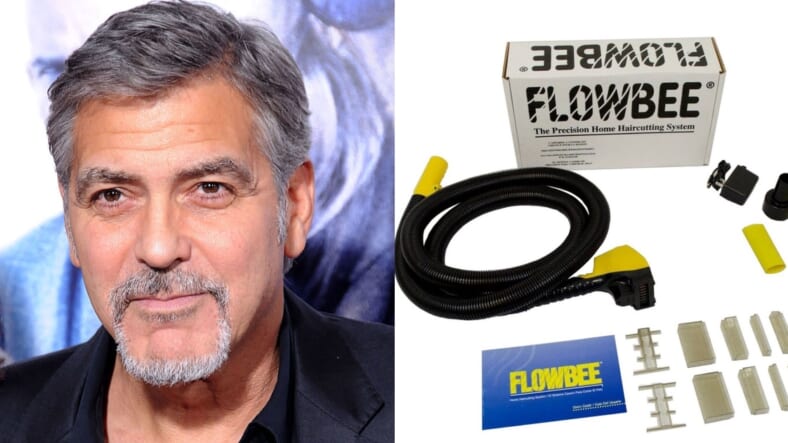 George Clooney cuts his own hair with a Flowbee. There isn’t a typo in that sentence, it is a statement based on something Clooney—it should be noted, an actor infamous for pranking friends—said in a recent interview on CBS Sunday Morning.

Actor/director George Clooney tells @thattracysmith that he's been cutting his own hair for years – by using the Flowbee haircutting machine https://t.co/SWYT8pFC8h pic.twitter.com/bKepm5LQCM

For context, CBS correspondent Tracy Smith asked Clooney about quarantine routines, given that the coronavirus pandemic-induced need to shelter in place caused many who didn’t normally think much about home life to suddenly focus on it as never before. He indicated he has actually had the same routine for years.

“I’ve been cutting my own hair for 25 years,” Clooney said, “My hair’s really like straw, and so it’s easy to cut. You can’t really make too many mistakes.”

Clooney continued, “So, years ago, I bought a thing called a Flowbee, which when we were…” Here Smith cut Clooney off, as shocked as if he’d revealed he had a hidden parasitic twin.

CBS then cut in footage from a vintage Flowbee commercial just to underscore that one of the coolest guys in Hollywood had just admitted something so fundamentally dorky. Or had he?

Clooney is one of the most infamous pranksters in Hollywood. Some of his past jokes include:

And that’s a very short list; the internet is full of articles devoted just to Clooney’s mischief.

On one hand, George Clooney is an A-list superstar and an entrepreneur — an undeniably serious man. He comes from a relatively famous Kentucky family. On the other hand, he’s notorious for just messing with people. So does he really handle his own grooming with a simple Flowbee or what? It’s almost too relatable.

We can neither confirm nor deny the use of a Flowbee on the set of #TheMidnightSky. pic.twitter.com/op7gt5rLyH

Even the Twitter account for his newest movie, The Midnight Sky (which hits Netflix and select theaters December 23rd), got in on the joke, posting a tweet that said they “neither confirm nor deny the use of a Flowbee on the set of #TheMidnightSky.”

One thing we know for sure, Flowbee didn’t expect such a high-level endorsement out of nowhere. The need to do your own hair while quarantined had already caused a spike in sales and then COVID-19 prompted the company to stop shipping new units altogether. For a time after the George Clooney story went viral, flowbee.com wouldn’t even load.

Once they catch up to demand, the slogan “Flowbee like Clooney” is just sitting there ready to give the somehow very 90s at-home haircutting system a surprising second act.