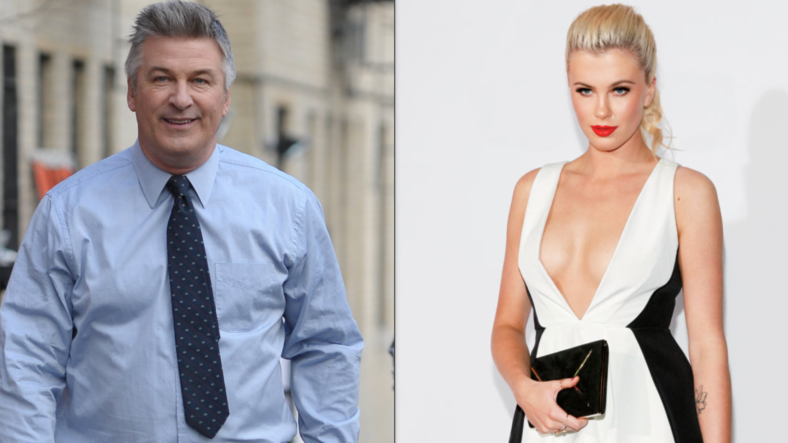 Entertainment Tonight just dropped a teaser for Spike TV’s upcoming roast special, One Night Only: Alec Baldwin, and it features the outspoken actor’s model daughter, Ireland, opening up a can of verbal whoop-ass on her pops.

Using her dad’s infamous voicemail rant in which he called her a “rude, thoughtless, little pig” as a jumping-off point, Ireland finally uses Alec’s swinish rant against him.

“I’m here to roast this big old ham I call my father. Speaking of pigs… some of you may remember me as that thoughtless little pig you read about.”

“That was a decade ago, and my dad and I are in a much better place now. He would never say something like that… because I’m 6’2,″ and I would kick his ass.”

Damn straight! The clip ends there, but Ireland continues:

“The truth is, that whole awful period nearly killed him emotionally. I wouldn’t see my dad that upset ever again…until I showed him my first tattoo. Okay, my second tattoo. I couldn’t show him where I got the first one.”

Hey now! Of course, the 21-year-old model and her 30 Rock star dad are on much better terms these days. They even have a sense of humor about the their phone call fiasco.

I love you. I always have and I always will. You're unique. You're strong. You're by far the funniest person I've ever known or will ever know and you make me so proud to be related to you. Thank you for all that you've ever taught me. You're the best dad to me, Carmen, Rafa and Leo and I can't wait for them to grow up and share the same beautiful memories with you as I do. I love you and thank you for always lifting me up and helping me figure out who I am! Happy Father's Day ❤️ from your little piggy girl 🐷 @iamabfalecbaldwin

A post shared by Ireland Basinger-Baldwin (@irelandbasingerbaldwin) on Jun 18, 2017 at 5:59pm PDT

Plus, how could Alec possibly stay mad at this beauty?

Had fun celebrating with @maximmag the other evening 😘

A post shared by Ireland Basinger-Baldwin (@irelandbasingerbaldwin) on Jun 26, 2017 at 3:08pm PDT

A post shared by Ireland Basinger-Baldwin (@irelandbasingerbaldwin) on Jun 7, 2017 at 7:12pm PDT

A post shared by Ireland Basinger-Baldwin (@irelandbasingerbaldwin) on Jun 4, 2017 at 6:32pm PDT

This is who I am, take it or leave. I am not going to be body shamed for being pale or not stick thin. I'm not going to spend hours photoshopping my authenticity away. I'm not going to beat myself up for not looking like someone else. I'm not going to be told that I'm damaged goods because of my tattoos. Most days I'm self conscious, but today I love every curve and edge. Your body should be treated with the dignity and respect it deserves. I want to be as real as possible with everyone that follows me because to be quite honest, what the is even the point of social media if you can't be who you truly are? I'm not here to mindfuck all of you into believing I am something that I'm not. I'm forever on a journey of finding my better self and I will continue to work as hard as I can to make MYSELF proud. Today I hope everyone is proud of who they are and can recognize what they can accomplish! 🌹

A post shared by Ireland Basinger-Baldwin (@irelandbasingerbaldwin) on Jun 1, 2017 at 7:00am PDT

A post shared by Ireland Basinger-Baldwin (@irelandbasingerbaldwin) on May 25, 2017 at 11:17am PDT

One Night Only: Alec Baldwin premieres Sunday, July 9 at 9 p.m. ET on Spike.