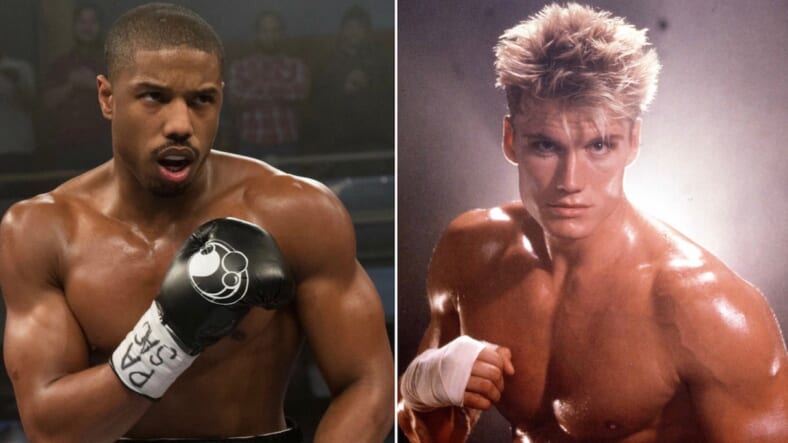 Sylvester Stallone just hit Instagram with a major (albeit cryptic) Rocky announcement: a sequel to 2015 spinoff flick Creed may actually be happening.

What’s more, it may feature a showdown between Ivan Drago (Dolph Lundgren) and Adonis Creed (Michael B. Jordan). It would be a death match considering Drago killed Adonis’ dad, Apollo Creed, back in Rocky IV.

“Here’s a chance to stretch your imagination … HISTORY WILL ALWAYS REPEAT ITSELF IN ONE FORM OR ANOTHER, JUST GOT TO BE READY!” Stallone wrote in a caption to a photoshopped image of Drago and young Creed in the ring.

The garbled announcement came after Stallone shared a bunch of #throwback pictures from the set of Rocky IV, one of which he enthusiastically tagged #CREED2.

It’s a shift in tone from when Stallone last spoke about a Creed sequel. In 2016, he told Variety that he had “mixed feelings” about returning as Rocky Balboa.

“I really have mixed feelings about this, seriously. I feel like Rocky, at the end of this movie on the steps, with the help of a young man, and he looks out and says, ‘From here, you can see your whole life’ – it sort of summarizes the whole thing. I don’t know how much further you can push Rocky.”

Despite Stallone’s newfound enthusiasm, production appears to be up-in-the-air. Writer-director Ryan Coogler had expressed interest in a sequel, but he’s been busy putting together a little Marvel movie called Black Panther.

Hopefully Coogler will return to the director’s chair as Creed was praised by critics and received an Academy Award nomination (Best Supporting Actor for Stallone).

If not, Jimmy Kimmel, who released a Creed 2 spoof starring Tracy Morgan in 2016, is always available.