The 007 actor has already lost a fingertip and some teeth. 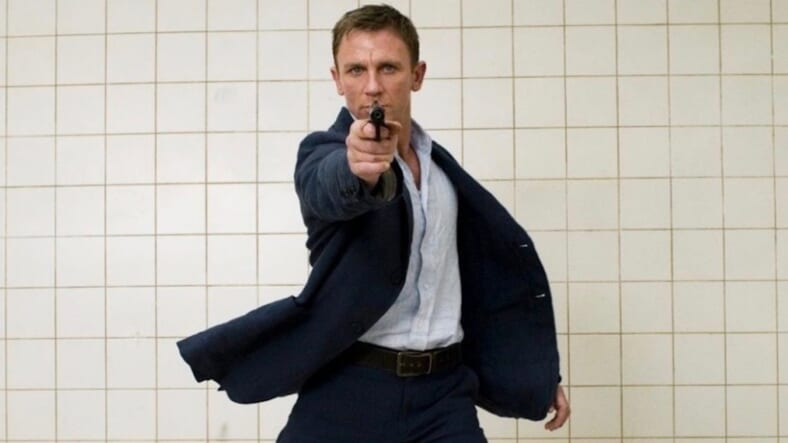 Daniel Craig is assuming the role of 007 one last time in the upcoming Bond 25 movie, and unlike many actors, he does his own stunts. This can cause problems—for example, he recently suffered an ankle injury while filming in Jamaica—one bad enough for him to go to the U.S. to seek proper treatment.

“He gets his hands very dirty,” chief stunt coordinator for Quantum of Solace and Casino Royale, Gary Powell, told the Guardian. “Daniel puts the work in, even if it’s something he’s not keen on.”

Refresh your memory of said stunts with a look at the clip below:

Here’s every time Craig has gotten injured while doing all of the crazy spy stuff James Bond does.

During the filming of Casino Royale in 2006, which was Craig’s first gig as James Bond, the actor knocked out his two front teeth during a fight scene with “minor actors,” according to the Sunday Mirror.

“He put his hand to his mouth, but the blood started to seep through his fingers—it was horrible,” an unnamed source told the tabloid. “He did not make a fuss though.”

James Bond definitely can’t have a gap in the front of his mouth so a dentist was flown in from London a.s.a.p. to give him some new chompers, and he’s been wearing a protective shield during fight scenes ever since.

Craig’s second Bond film Quantum of Solace also led to him losing another body part: the tip of his finger.

“I lost the pad. I was bleeding a lot,” he told Playboy. “I had to get it cauterized. Filming stopped and everybody went, ‘Oh my God! He sliced the end of his finger off!’ They went looking for it, but couldn’t find it.”

But that’s not all. He also aggravated an old injury on his shoulder “by jumping around on Bond movies,” as he described to the Telegraph, and had surgery to avoid making things worse.

“It wasn’t an essential operation but if I don’t do it now, I could do something on the next movie and rip it out of its socket,” he said. “It’s just a pain in the ass, really, and it’ll be a long wait before it heals properly.”

According to the Guardian, the filming of Spectre in 2015 was delayed for a few days due to Craig spraining his knee during a fight scene. Luckily, a mild knee injury isn’t as extreme as losing the tip of a finger, but it’s still something.

According to the Sun, production on the latest Bond movie has reportedly been delayed due to Craig hurting his ankle while filming in Jamaica.

He apparently slipped and fell while running and has been flown to the U.S. for X-Rays. Though the severity of the injury is still up in the air, it’s clearly bad enough that it needed an X-Ray.

“Daniel was suited and booted for one of the last scenes in Jamaica,” a source said. “He was sprinting during filming when he slipped and fell quite awkwardly. “He was in quite a lot of pain and was complaining about his ankle.

“As you’d expect he was also pretty angry that it had happened. He threw his suit jacket on the ground in sheer frustration.”

Well, here’s hoping Craig recovers quickly and doesn’t break any limbs or chop off any more fingers in his final Bond movie.