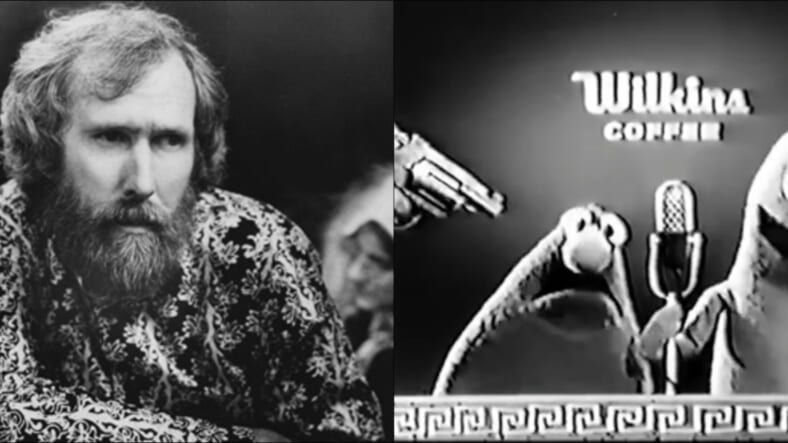 One way to demonstrate just how different times were in the early 1960s is to watch the nearly 15-minute video above. It’s a collection of completely gonzo short commercial spots for Wilkins Coffee, a brand based in Washington D.C.

If those puppets—brown, skinny, bubbly Kermit-like Wilkins and his counterpart Wontkins, a red blob who hates Wilkins—look familiar, it’s because they are really proto-muppets and late Muppets creator Jim Henson was the hilariously twisted mind behind this ad campaign, which recently went viral on Twitter.

can't stop laughing at these early jim henson commercials where one guy just kills another for not liking wilkins coffee pic.twitter.com/ZtfE06p0pR

YOU CANT SHOW A COMPILATION WITHOUT SHOWING THE BEST ONE pic.twitter.com/tmAVJNOaIP

The story is that the company reached out to Henson in 1957 with what he apparently treated as an irresistible challenge: Make spots for Wilkins with your muppets, but you’ve only got about 10 seconds for each spot.

In an article published in 2019, The Washington Post dove into the history of Henson (he died in 1990 from a bacterial infection) and the Wilkins Coffee ads:

As Brian Jay Jones put it in his 2013 biography of Henson: “In Wilkins and Wontkins, Jim had created the kind of silly and endearing characters that were already becoming his trademark — the kind of characters that could even let him get away with being a little dangerous.”The ads were a hit. Wrote one newspaper critic: “The TV public, weary of looking at such things as gurgling stomach acids at work, took the Wilkins Muppets to heart. No TV commercial ever has known such popularity.”

The company reported that the ads boosted home sales of the brand by 300 percent. If you watch, you see the ads are full of the same kind of slapstick violence found in just about any Warner Brothers cartoon from the era but done in the dry Muppets style that would eventually become so familiar to generations of kids growing up watching Sesame Street and later, The Muppet Show.

Each Wilkins spot has the same plot: Wilkins asks Wontkins a coffee-related question; Wontkins often responds that he doesn’t like coffee. No matter what, Wilkins then casually does something brutal—presumably as a penalty or in revenge. The ads ran for about 5 years and in that time Wontkins was shot, blown up, and electrocuted.

Twitter users, in particular, had fun with coming up with new Wilkins and Wontkins scenarios:

gonna be thinking about Wilkins Coffee for the rest of my life pic.twitter.com/h3iqQPqQsi

smdh that the Wilkins coffee spokesmuppet became the Joker.

"We live in a society where honor is a distant memory, don't we, Wontkins?" pic.twitter.com/L6ZU7aYcgy

Wilkins Coffee: Fuck around and find out

Wilkins and Wontkins were spokesmuppets for other ads as well and they were every bit as ridiculous as the coffee spots.

The first ad in the collection above is just one example, for Faygo: Wilkins brags he’s filled his pool with “Faygo Strawberry.” Wontkins falls in, says, “Help, I’m drowning!” and Wilkins says, “I told him he’d end up drinking Faygo.”

Normally all this hoopla would be a gold mine for any consumer brand, but Maxwell House bought Wilkins out in 1989. So more than anything watching collections of what Henson could do with crazy time restraints and still manage to be hysterically funny is a lesson in some brilliant old-school advertising.

Then again, Maxwell House surely knows already about the ads going viral. Don’t be shocked if Wilkins and Wontkins show up shilling again sooner or later.