“Bullsh*t is the idea that if you are a man, every woman you see, you should be able to get an erection.” 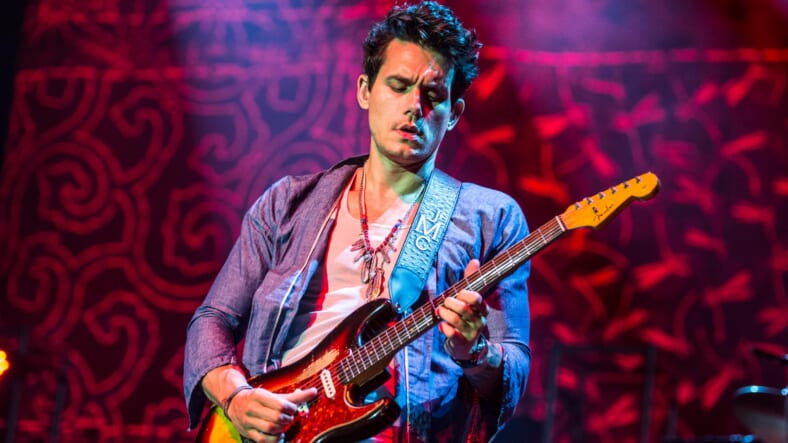 The pop singer-songwriter, who has been known to play alongside major acts like the Grateful Dead (as Dead and Co.) and Dave Chappelle, broke during his Sunday night set in Baltimore to deliver a strong statement on what he describes as a “bullshit” male contract that molds men from an early age.

Watch his two minute-plus speech below:

“Bullshit is the idea that if you are a man, every woman you see, you should be able to get an erection,” he began.

Newsweek notes that the speech seemingly addresses “rape culture.” Some of the audience responded positively with cheers and applause.  One woman asked Mayer to elaborate, and he was happy to do so.

Mayer added that subscribing to the “male contract” affects everyone negatively.

“They’re scared and you’re scared,” he detailed. “And I’m just going on record as reviewing the trauma of men feeling like they’ve fallen short of a bullshit alpha male contract that nobody can live up to. Until we get rid of that in men, you won’t have the life that we all deserve.”

This isn’t the first time Mayer has spoken out about society’s treatment of women. In August, he caught flak for criticizing the use of the word “feminism” while advocating for gender equality.

“My take is less about feminism and more about the issue of nomenclature, specifically how reductiveness of language can turn people off from noble and vital causes,” Mayer wrote on his Instagram story.

“If you asked people if they support ensuring equal rights for women in all aspects of their lives, they would very likely answer yes. Change that question to ‘are you a feminist’ and the answers instantly become more complicated. That’s because a single phrase is being co-opted than the actual ideal it attempts to present.”

Mayer’s current tone is notably different than it was during a sexually-charged interview he gave to Playboy in 2010. At the time, he had dated singer Jessica Simpson on-and-off for two years.

“That girl is like crack cocaine to me,” Mayer said of Simpson. “Sexually it was crazy. That’s all I’ll say. It was like napalm, sexual napalm. Did you ever say, ‘I want to quit my life and just fucking snort you? If you charged me $10,000 to fuck you, I would start selling all my shit just to keep fucking you.'”

Mayer has had a number of high-profile relationships with Minka Kelly, Katy Perry, Jennifer Aniston and other beautiful women. In the same interview, he said he wanted to “start dating separately from [his] dick.”

“My dick is sort of like a white supremacist,” Mayer said. “I’ve got a Benetton heart and a fucking David Duke cock. I’m going to start dating separately from my dick.”

Fox News host Tucker Carlson attempted frame Mayer as a hypocrite by citing lyrics to his admittedly cheesy 2002 hit “Your Body Is a Wonderland” during a debate with political commentator Anushay Hossain.

The line Carlson used was, “One pair of candy lips and your bubblegum tongue.”

Carlson’s potshot wasn’t well received. One Twitter user called his reading of the patently “unsexy” and another said Carlson made Mayer’s point.

Is there anything more UNSEXY than Tucker Carlson reading the lyrics to Your Body Is a Wonderland by John Mayer? pic.twitter.com/BLDA0LYmoc

tucker carlson quoted lyrics from “your body is a wonderland” to challenge john mayer’s toxic masculinity rant (😂)the worst part is that in the process he demonstrated what toxic masculinity *actually* is by interrupting and mocking anushay. 🤷🏼‍♀️🤦🏼‍♀️

Tucker Carlson is reaaaaaally reaching there. Quoting lyrics from “Your Body is a Wonderland” to try and prove a point is just beyond sad.

John Mayer was right about toxic masculinity and Carlson just proved his point for him.

What do you think of Mayer’s comments?