Thought this day would never come? You’ve got another thing comin’. 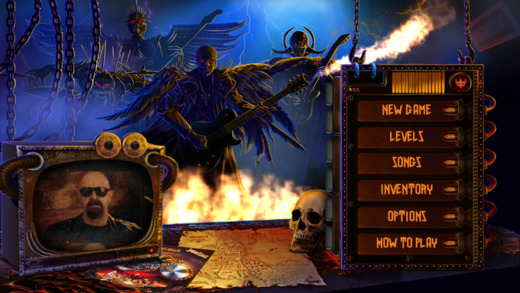 Judas Priest were one of the biggest metal bands of the ’80s, but that hasn’t stopped the aging rockers from keeping up with the times.

Imagine our surprise when we found out that Rob Halford and the boys had decided to lend their name and their songs to an iPhone app. Could the legendary headbangers really be pulling a Kim Kardashian with their new mobile game, Road to Valhalla?

We’re happy to report that Judas Priest’s app is smarter than the cash-grab Kardashian game, though that’s really no feat.

Ultimately, Road to Valhalla is a half-assed Guitar Hero clone, ported to a touchscreen, skinned by all things Judas Priest and trimmed with stereotypical metal hallmarks like skulls and motorcycles.

It features five non-album versions of some of the bands biggest hits like “Breakin’ the Law.” Game play is little more than well-timed tapping. The end result is a low-effort, niche game that’s likely to be appreciated by no one other than Priest’s devout fan base and, even then, for a pretty short time.

Still, you can just imagine the meetings that took place at the outset of this one as the 60-something metal quintet rolled into some Silicon Valley conference room, clad in black leather dusters, and, like our grandmother, demanded to know what all the hoopla is about these new iPhone gizmos.

If their $1.99 app actually accomplishes ingraining them into a younger generation, we will be majorly surprised.

But between getting love on Beavis and Butthead in the ’90s and being featured in the classic 1986 indie rock doc short, Heavy Metal Parking Lot, Priest has already racked up plenty of youth culture cred with past generations already.