Keanu Reeves Turns 54 Today, So Let’s Celebrate With 5 of His Greatest Fight Scenes

From John Wick to Neo, the action star never disappoints. 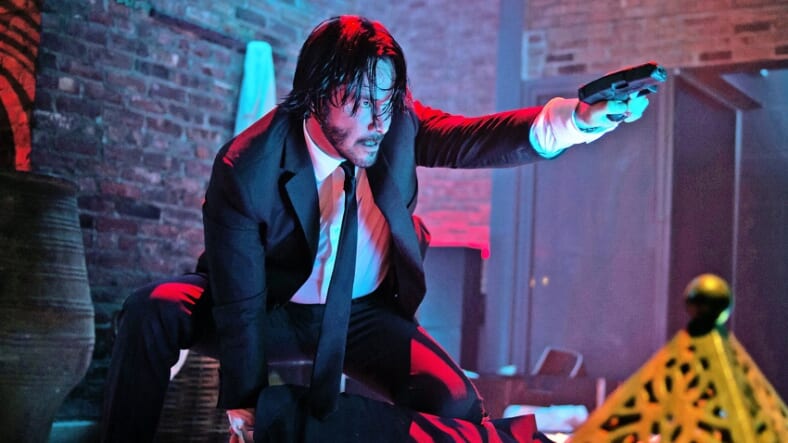 How the hell is it that Keanu Reeves turned 54 on Sept. 2? The star of the John Wick and Matrix trilogies is one of those people who doesn’t show his age at all, no matter how many brutally exhausting ass-whippings he’s given across numerous movies through the years.

Reeves was one of the stars of Bram Stoker’s Dracula in 1992 so it’s easy to believe maybe ended up with a touch of the undead in his blood but what do we know?

Reeves’ career has oddly paralleled that of another fifty-something star, Tom Cruise. Both broke out in comedies (Risky Business for Cruise, the Bill & Ted moves for Reeves) then translated two very different acting styles into becoming major action stars.

Whereas Cruise brings a manic, sprinting spirit to everything he does, Reeves has this kind of zen master cool, even during bloody and brutal John Wick rampages through discos and museums.

That’s probably Reeves’ secret sauce, the sense his semi-retired assassin could pause between shooting Russian gangsters and take a nap before getting up and killing again.

A lot of men hit their fifties and start taking extra naps and wearing soft shoes. Keanu Reeves goes out and does firearms training in the desert.

On his birthday, let’s give Reeves some respect for his legacy and check out five of his best fight scenes. This isn’t definitive at all; we could’ve listed 50. Still, there’s a lot of great beating and shooting going on below.

5. The final fight between Neo and Agent Smith in The Matrix: Revolutions

It’s a bad movie and the this fight is absurd even by Matrix standards, but it’s a lot of fun to watch.

4. The big fight between Neo and Smith in The Matrix

Look, there are a ton of fights in The Matrix trilogy to choose from, so this is arguable. But admit it—the first time you saw it, you were glued to the screen.

No one has heard of this movie. Made in 2013, Reeves directed and starred as the bad guy, Donaka Mark. You don’t really have to see it to enjoy this fight scene, which is kind of a Bruce Lee-style throwback full of awesome moves and very little blood.

In John Wick, the first movie, villain Viggo Tarasov explains how fearsome the formerly retired assassin really is: “John is a man of focus, commitment, sheer will… something you know very little about. I once saw him kill three men in a bar… with a pencil, with a f**king pencil.” In Chapter 2 we get one hell of a callback.

This is one of the best fight scenes from any movie yet made in the 21st century. It’s not clean or easy. Wick gets hurt, his enemies die in very messy, bloody ways. Yet you learn here that the title character is a force of nature, a genius at murder, and that he could also die at any moment.

That’s just a tiny selection, really. Let’s hope Reeves keeps adding to this total for years to come. If any guy could keep kicking cinematic ass like this into his sixties, it’s probably him.