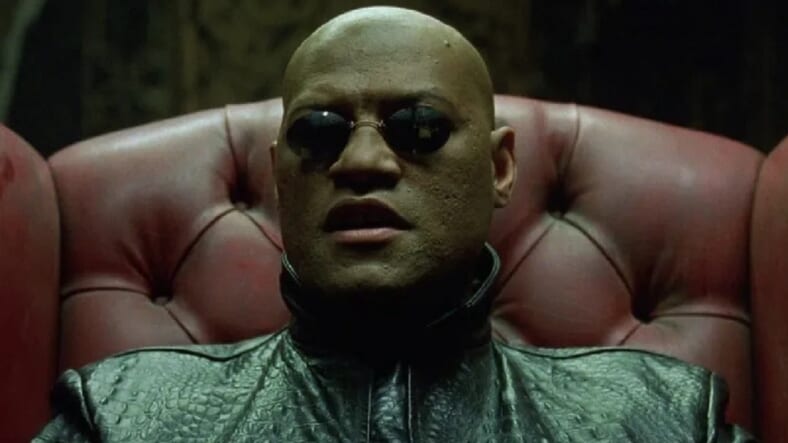 The good news is The Matrix 4 has resumed shooting in Berlin, because–according to a new Keanu Reeves interview with the Associated Press–the cast and crew are “scrappy.” See Reeves’s brief video below.

The bad news is Laurence Fishburne isn’t a part of the production at all. And it’s hard to tell how he feels about that.

In an interview with New York magazine, Fishburne was asked about the production and it turns out that he wasn’t even offered a choice between the red pill or the blue pill.

Fishburne did admit when he read the script for the first Matrix he thought it was “the most original thing I’ve ever read.”

But he later said he has “not been invited” to take part in the production and that maybe this will prompt him to “write another play.”

The actor wasn’t as terse about the role or the movies as the preceding might make it seem. He also said that Morpheus–the ship captain who mentors Reeves’s Neo in the ways of the real world of Zion and the digital world of the Matrix–is most likely “the role that I’ll be best remembered for, which is great. It’s pretty good.”

However, Fishburne continued, “it’s not the only thing I’ll be remembered for, which is better.”

“What I get with [Morpheus],” he said, “is I’ve got Darth Vader in this hand, and I’ve got Obi-Wan in that hand. I’ve got Bruce Lee, I’ve got Muhammad Ali shuffled in there, and I’ve got kung fu.”

The production has been pretty secretive overall, but It’s possible that the role has been recast due to script demands for a younger version. ScreenRant noted in April that “among The Matrix 4‘s new additions are Neil Patrick Harris, Jessica Henwick and Yahya Abdul-Mateen II, and Abdul-Mateen is heavily rumored to be playing a younger version of Morpheus.”

We’ll just have to wait along with Laurence Fishburne and see when The Matrix 4 premieres on April 1, 2022.