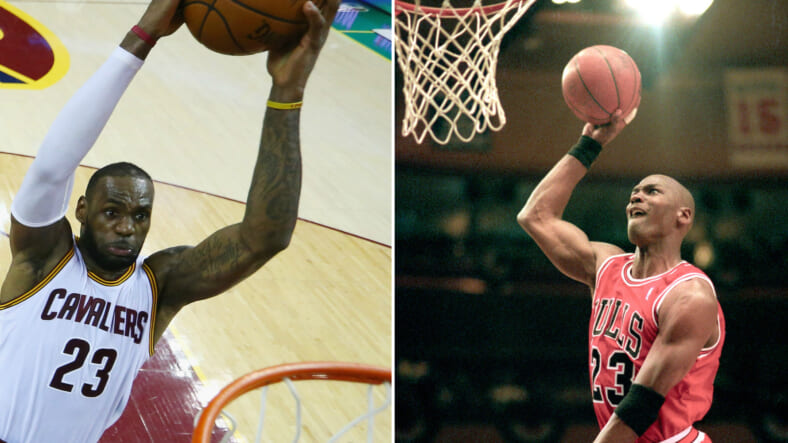 Hoops fans of a certain age will remember a popular marketing phrase from Michael Jordan‘s heyday: “Be like Mike.” Some might even remember the lyrics to the whole song.

LeBron James was eight when Gatorade put out that commercial, and 24 years later he’s upped the ante.

“It’s a personal goal (to surpass Jordan),” he said Monday. “I just never brought it up. It’s my own personal goal to be able to be greater than great. I think that should be everybody’s personal goal.”

LeBron doesn’t want to be like Mike, he wants to be better. For any other player that would be a pipe dream, but for LeBron it’s a real possibility.

For many fans, if LeBron wants to be considered alongside MJ he’ll have to win three more championships to match Jordan’s six. And if he pulls that off, he’ll almost certainly surpass Jordan on the NBA’s all-time scoring list. With those two achievements, it would be hard to argue that LeBron is anything but the GOAT.

Of course, people still would. Inexplicably, LeBron has more haters than any player of his caliber ever has. Blame it on “The Decision” or his playful personality, which rankles fans who want their NBA stars to be cold blooded and calculating, like Jordan and Kobe Bryant. Whatever the reason, many fans simply don’t like LeBron. So even if he does ascend that mountain and one day rightfully claims the title of greatest ever, few will be able to admit it.

Unless he makes Space Jam 2. Then everyone will love him.