“Throughout the years, we have never interfered…until now.” 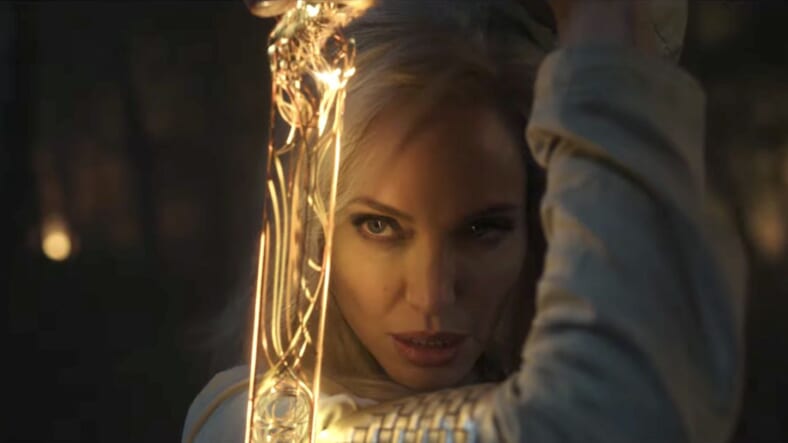 What is Marvel’s Eternals about, anyway? It’s clearly a superhero movie in the usual Marvel mold but there’s more going on than the usual wisecracking and city-smashing. And we know it stars Angelina Jolie as a blonde goddess and a shockingly ripped Kumail Nanjiani.

The new teaser trailer above has plenty of hints as to what we’re in for. Eternals is about the history of humanity, at least in part, and the beings that helped non-superpowered humans move forward.

Harington played Jon Snow and Madden was Robb Stark on HBO’s Game of Thrones and that connection not lost on fans.

Brobible wrote about the GoT tie-in, which is coincidental enough to be weird:

[In] the pilot of Game of Thrones, Richard Madden’s Robb Stark tells Kit Harington’s Jon Snow that the next time the pair see each other, Snow will be wearing black (as that’s the color of the Night’s Watch). And while the pair ultimately never cross paths again — Stark is killed in the Red Wedding before he and Snow ever reunite — the prophecy has still been fulfilled, as Harington will be starring alongside Madden as Dane Whitman, a.k.a. the Black Knight, in Marvel Studios’ Eternals.

A detailed synopsis of the movie hasn’t been released. This is all we have so far from Marvel: “The Eternals, a race of immortal beings with superhuman powers who have secretly lived on Earth for thousands of years, reunite to battle the evil Deviants.”

There’s also this telling line from the trailer: “Throughout the years, we have never interfered…until now.”

The movie appears to span huge stretches of time as well, with scenes from what looks like prehistory as well as the 21st century.

We’ll find out just how badass Angelina Jolie is with her golden sword when Eternals hits theaters on November 5, 2021.