We swear we could smell the bacon and eggs, even on the phone. 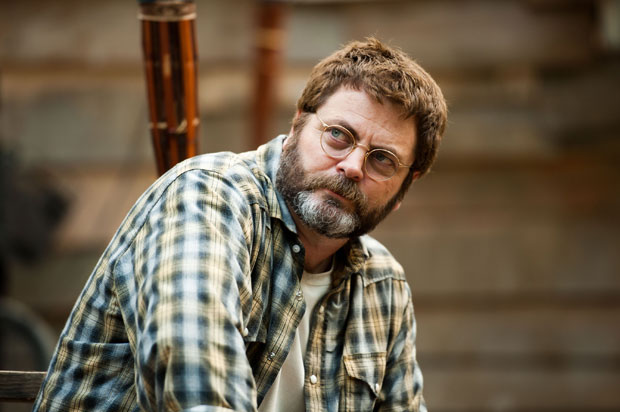 We swear we could smell the bacon and eggs, even on the phone.Photo: Julie Hahn

Good – I don’t think I’ve ever spoken to Maxim before.

I have my shirt off and I’m fondling my breasts just to get into the flavor.

Hot! You definitely have the finest moustache we’ve ever featured.

I want to bring you some tawdry material as best I can.

That’s very good of you. You’re starring in The Kings Of Summer [out now], which is about teenagers who run away and build a house in the woods. Have you ever been tempted to try that?

I have. I mean, growing up, I had a pretty intense two-story tree house down by the creek, and I have to say, I grew up in this incredible farm family – it was pretty Norman Rockwellian, and even though I definitely succinctly recall the malaise of being a teenager and hating my parents and being misunderstood, I ran away a couple times about a half a mile with my tent. One time I took pancake batter and made pancakes over a fire, but other than that, I’d end up back home for breakfast. I think I’m fortunate in my parentage that my parents couldn’t help but keep me around.

The movie is awesome. How did you get involved with it?

I’m crazy about the movie. It’s [director Jordan Vogt-Roberts’] first feature. He’s 29, and if I didn’t love him so much, I’d punch him in the mouth. And the cinematographer, Ross Riege, is his cameraman – he’s been making comedy shorts and then he shits this thing out, I’m so tickled to be a part of it. I just was taken by the script by Chris Galletta, I think it’s really a brilliant piece of writing, because his humor is so finely wrought, wonderfully dry and strange, which is certainly my own wheelhouse. Meanwhile there’s this wonderfully emotional story laced through the film that gives it such a great heart, and makes me feel really nostalgic for the John Hughes films of my youth. If I was ever going to make a film like this, you better goddamn believe some kids are going to be jumping off a cliff into a quarry. If that’s not the idyllic teenage dream, I don’t know what is.

How much did the humor actually come across on the page? It seems like something that’s all in the telling.

It really comes across. The character Biaggio, I was so jealous of that part because I’m always drawn to the Jim Ignatowski of the piece. Do you know that guy? It was Christopher Lloyd’s character on Taxi. The weirdo. I love the funny weirdo, and Moises, who played that part, is such an amazing, talented kid. I was head-over-heels in love with him and thank God, because I had to haul him through the woods in 104 degree Cleveland heat, take after take.

That kid is just hilarious. How did you keep a straight face around him?

Well, many times we didn’t. When he would do these little reptilian bits around the house with the snake…he’s actually quite a handsome guy, but it just takes a little bit of a rictus of the face and a couple flicks of the tongue to be like, Jesus, you’ve suddenly become Gollum right before our eyes! But there was a lot of that in the film. Among the great, many credits to Jordan Vogt-Roberts’ acumen is that he brought in the most hilarious comedians for the tiniest cameos. There’s a couple of scenes that happen on my front porch with the cops and then with the delivery food guy, Kumail Nanjiani, I mean, those people are so goddamn funny that we got through a lot of it, but we also ruined a great many takes.

Parks And Recreations’ Ron Swanson has become one of the most beloved TV characters of recent years. What do you think Ron himself would make of the adoration he gets?

I think he would shake his head and go outside and chop a cord of firewood. I mean, I’m very gratified at all of it, especially because it brings more attention to our show – and our show needs all the help it can get, because we don’t have the advertising budget behind us that some other networks bring to their comedies – so anything that can help bring popularity to our show, I’m all for.

Do you have a personal favorite Ron Swanson moment?

Oh boy, that’s a hell of a tough question. One of my favorite establishing moments was in an early episode where I have a hernia and I don’t want to let anyone know that I’m injured. And it was the episode where I said that I was born ready, I’m Ron Fucking Swanson. There’s a moment that, you know, I was imagining this excruciating pain that had me paralyzed, and they brought me a cheeseburger and said, “Try to eat this cheeseburger.” I thought it would hurt too much to raise it to my mouth, and I tried to throw it with a flick of the wrist into my mouth and was utterly disappointed that I wasn’t able to catch it, but it ended up being funny anyway. For some reason, that established a lot of what came after for Ron, for me. It’s not beneath him to stubbornly try to accomplish things that will make him look like a complete ass.

The site started getting a lot of attention after Parks and Rec. It existed beforehand, and we make fine, handcrafted, heirloom pieces, and of course that makes them very expensive. So a lot of fans were coming to the site and saying, “Jeez, your stuff is beautiful, but is there anything cheaper than a $450 foot stool that I might get for my dad?” We created some items just for that audience, so the two biggest sellers are the Offerman Woodshop Moustache Comb, and a very popular item this last Christmas, the wooden kazoo.

You’re listed in the upcoming LEGO movie as a character called “Metal Beard.” Firstly, can you tell us anything about it? And secondly, will the Internet finally explode over this one?

You know, the Internet is baffling to me, and I try to eschew it as much as possible, because the more time I spend online, the less time I spend in my shed, so I don’t know. I imagine the movie itself is going to be an insane explosion. It’s created by Chris Miller and Phil Lord, who I worked with on 21 Jump Street, and these guys, I’m just absolutely in love with. They foolishly thought that they had to pitch the [LEGO] movie to me, like I would refuse to do anything at all with them. I mean, I would literally come sweep their office if they asked me to, because I love collaborating with them. But they did this whole pitch meeting with me where they showed me a bunch of the art and told me the story, and the story is so beautiful. It’s a story for kids, ostensibly, but it’s going to resonate with everyone who watches it because it’s a story of one’s own creativity and whatever you think is a good idea, i.e., however you want to put together your LEGOs, that’s the right way. That, combined with the hilarious cast and the art, is just mind-blowing.  I’m so, so grateful to be part of this thing and I can’t wait to see what they do with my character.

Can you tell us about him?

Well, he’s a pirate. He was destroyed in a battle, but he put himself back together, so he’s kind of a LEGO world, cyborg robot guy, with a lot of gumption.

Dog Movie Previews: Now You See Me, After Earth, and The Kings Of Summer