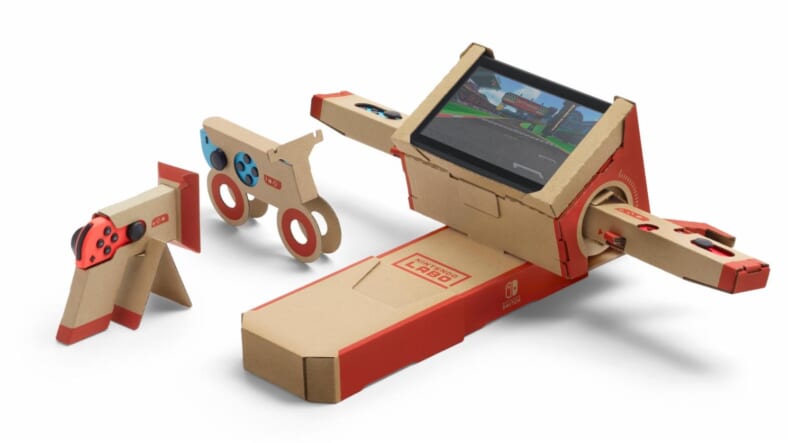 It’s another week being dominated by Nintendo. After last week’s epic outing with Kratos in God of War, Nintendo is back to take control of our thumbs with an entirely new take on gaming, plus a new version of an old favorite with a delightfully foul-mouthed South Park RPG.

You may not know what to make of Nintendo Labo when you first look at it, but open the box to get started and you’ll be building your own RC car, fishing pole or piano in no time. Like so many of the things that come from Nintendo, Labo recaptures the joy you may have felt in childhood (we don’t want to make any assumptions). This time Nintendo has harkened back to when you opened your first box of Lego or put the finishing touches on your first Erektor Set with a sort of cardboard origami approach to it.

This may be Nintendo’s first foray into having their fans build something in the real world, but they’re leveraging a vast history of fun and imaginative creations to do it; it’s no wonder they’ve managed to pair something like Labo with their blockbuster Switch console. Individual sets are available, but starting with the variety set opens you up to some of the core Labo experiences, similar to the way Wii Sports showed off the original innovation of the Wii back in 2007. Labo’s instructions are reminiscent of Lego in many ways — displayed on the Switch itself — but there’s a magical element to Labo that comes alive once you integrate your Switch’s screen and joy-cons into the mix.

It’s not just a clever approach to an inventive idea, it’s an eye-opening experience that makes you realize Nintendo has had major plans for the Switch from the get-go and hid hardware in the console to make these longview visions possible. Whether it’s building a backpack to enable a giant robot fight or playing maestro on a keyboard you’ve built yourself, Labo is taking Nintendo off of a screen and into your living room in a way that we’ve never seen from Nintendo before. (Buy)

South Park: The Fractured But Whole for Switch

We already have a lot of love for South Park’s most recent games. Stick of Truth and Fractured But Whole have incorporated the characters and humor, both high brow and low, into excellent RPG strategy games that have enough quality and challenge that they’d likely stand well on their own even without the injection of our favorite cartoon. Finally, the awesome turn-based gameplay of Fractured But Whole comes to the Nintendo Switch, a platform perfectly suited for the awesomeness of Matt and Trey’s creations.

Playing on Xbox was well and good, but playing on Switch, as a portable, handheld device, means getting Fractured But Whole on the go—and it feels damn good that way. It’s another great outing for the team behind the show and another coup for Nintendo, proving that, even though they can do light fun like Labo above, they can get down and dirty with Cartman too. (Buy)