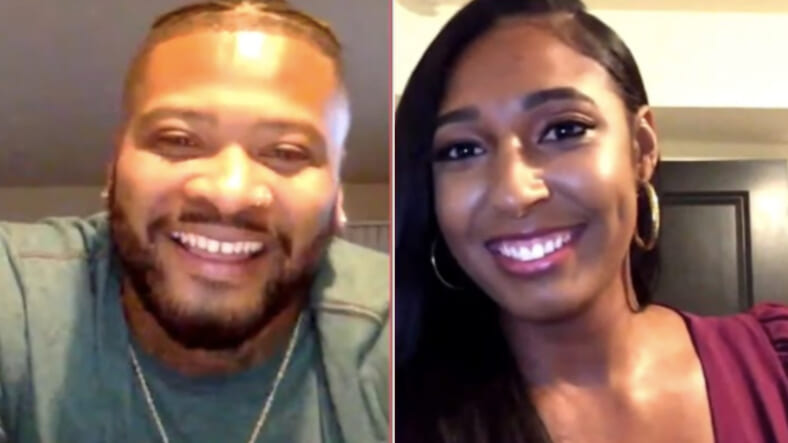 The featured Crush on Quartship‘s seventh episode, which aired October 1st, was none other than self-proclaimed ‘chameleon,” model, and former professional athlete Arryana Barton (@arry.b ).

Now a marketing professional, Arryana is a former Legends League football player. She has created memorable brand activations for Jack Daniels, Herradura Tequila, and Coca-Cola. A standout track and field athlete, Arryana is a four-time All-American triple jumper as well as a former member of the Atlanta Steam women’s tackle football team. She has been a featured model in several music videos as well as for hair care and clothing lines.

Each week, Quartship contestants come prepared with their “approach” — a 60-second presentation meant to show their social media crush why that man is a perfect choice for a virtual date.

Brandon McDowell went first. With a video in which he climbed a high fence to a closed track to both display his fitness and show that nothing would stop him from supporting Arryana’s athletic accomplishments, he scored an 8.7. Next, Kristjan presented a visual story of his activities and accomplishments, earning a 7.3. Lastly, Jean Baptiste surprised his crush with an artistic yellow flower collage, earning a 7.7.

Brandon’s fence stunt paid off, as his was the winning score.

A professional poker player and entrepreneur, winner Brandon McDowell is known to his friends as Dyce. The big man has a passion for fitness but despite his imposing build, Brandon says he is a sophisticated romantic, enjoying moonlight strolls on the beach, dancing, and caviar on Sundays.

Tune in to the next episode airing Thursday at 9 pm EST for high-value entertainment and a chance to experience old school chivalry in a fresh, live setting with talented contestants on Quartship!