Indulge your inner pirate with a boozy trip to this killer Caribbean island. 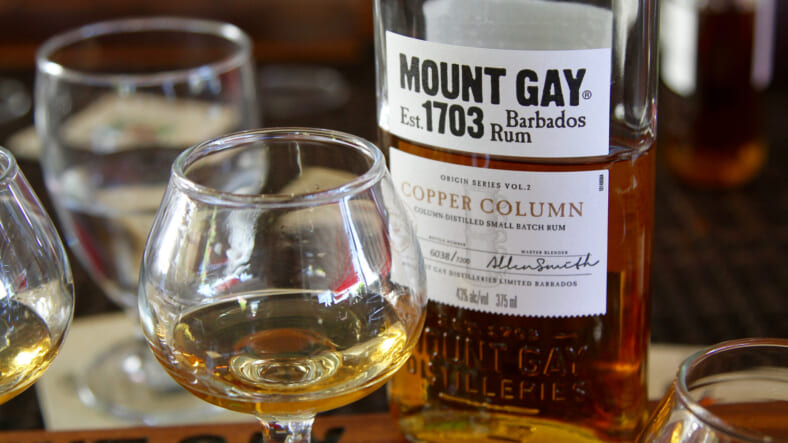 Barbados isn’t just the island that spawned Rihanna–it’s also famed for producing some of the world’s best rum. We recently took a booze-soaked tour of the idyllic West Indian Isle, and came back with 15 things you probably didn’t know about Barbados. Cheers!

Say the word “Barbados” and discerning drinkers will immediately think “rum” – Mount Gay Rum, to be specific, the world’s oldest rum brand, established on the isle in 1703. Though actually, as we discovered on a recent visit, documents have been uncovered dating its distillation back way more than three centuries, making it the oldest rum brand in the world by far.

The East Coast of the island, and particularly Bathsheba and the so-called “Soup Bowl”, are a haven for surfers with massive waves, which can be found crashing eight months out of the year from November through June. The West Coast meanwhile is preferable for swimming and lounging with rounds of rum drinks ready to hand.

3. Book at table at the Cliff Beach Club

The Cliff Beach Club in St. James is one of the coolest beachfront dining spots in he Caribbean, and they make killer cocktails like a sage and pineapple mojito and a rum-based Bajan punch. Blazing torches ring the deck all the way around the water, and you can feast on dishes like chargrilled barracuda, a local specialty.

4. It’s all about copper stills and Kentucky oak

Not only are the island’s ridiculously beautiful beaches the perfect place to sip the stuff, but there’s now a whole world of rum being crafted in Mount Gay’s historic copper stills beyond the iconic Eclipse, the brand’s signature tipple, an amber-hued, aromatic elixir aged in Kentucky bourbon barrels which is the gold standard for blended rums the world over.

5. Reach for the top shelf

We also discovered that Mount Gay now creates numerous expressions using various combinations of distillation and maturation (aging), including the delectable Black Barrel and XO, now available in the U.S., as well as some rare and unexported bottlings, including Charred Cask and a Mauby Rum distilled with bark from the Mauby tree to which islanders attribute all sorts of benefits in addition to tasting great.

We can’t guarantee you’ll get to sample the highly-guarded, and high proof, spirit straight from the cask (unless you’re on assignment for Maxim), but Mount Gay Black Barrel, a small batch blend made using two different types of stills, matured for a second time in deeply charred Kentucky bourbon barrels (below), evokes its essence, as does XO (Extra Old), a super-smooth blend composed of rums aged 8-15 years.

7. There’s tons of rum shops all over the place

One of the most appealing features of Barbados for the thirsty traveler is that the island is dotted with rum shops, sometimes not much more than simple wooden shacks but always welcoming, where the custom is to purchase a bottle of rum along with whatever mixers take your fancy. These can be found by the side of every road, but the most alluring are those perched on one of the many picturesque beaches.

8. The place to drink rum is right by the damn beach

It’s especially easy to while away an afternoon at one of these admirable, well-stocked establishments, with a view of the clear blue water, fishermen plying their trade, and expanses of fine white sand. The locals are friendly and always ready to bond over a rum and tonic or two. Calypso music is the soundtrack to these excursions, growing steadily more raucous as the evening progresses.

Sailors and rum go way back; it’s the traditional tipple of both pirates and yachtsmen, and the Mount Gay Round Barbados Race Series is one of the highlights of the sailing season. Competitors – and competitors only – get the coveted red baseball caps known simply as “The Hat” that are as highly prized as the trophy itself.

10. Safari tours are a wild way to have fun

Barbados is small enough to explore in the course of a day or two, and the preferred method for many sightseers are the Island Safari 4×4 tours that will take you everywhere from the sugar cane fields – the raw material of rum, which is fermented and distilled from molasses or sugarcane juice – to the beaches on both coasts – though be aware that some of the terrain can be rough.

There are swaying palm trees aplenty, but the coral rock formations of the island – another important feature for rum production, as it turns out, since they act as a natural filter for the water sources which are essential to distillation – make for more interesting scenery, especially where the ocean has carved out caves and caverns, and some enterprising sort has put up a rum shop as well.

12. You can charter a private booze cruise

Boat tours and catamaran charters are a popular alternative to the safari trucks, and the best ones of course have bars on board (are you sensing a theme here?). It’s the best way to see the coastal attractions of the island, ranging from private beaches presided over by imposing coral stone mansions to stretches of sand that seem to be host to non-stop parties where the only requirement for entry is a laid-back attitude.

13. The iconic Land Rover Defender lives on in Barbados

With its British heritage –Queen Elizabeth II is still technically the head of state – Barbados is also a haven for endangered Land Rover Defenders, which can be seen performing all sorts of tasks around the island from farming to towing boats. Some of the higher-end safari outfits use Defenders and with a bit of research you can even rent one yourself – just remember they drive on the other side of the road.

14. Kick back at the Coral Reef Club

Regardless of how you arrive, you’ll want to book rooms at the Coral Reef Club, one of the island’s old-school cool resorts dating back to the 1950s. The five-star property, a member of Small Luxury Hotels of the World (SLH), is set on 12 landscaped acres including a beautiful stretch of beach and is a bastion of relaxed elegance where you can unplug from the annoyances of daily life in the digital age.

Food on the island ranges from extremely simple to sophisticated, but is all based on the abundance of fresh fish to be found there. Feast like the locals at the Friday night fish fry at the public market in Oistins, or check out the cuisine at island hot spots like Daphne’s and the Tides Restaurant, which has refined the art of elegant seafood dishes with a Caribbean flair, not to mention a beautiful selection from the bar and wine cellar. Bottoms up.