The Armored Troop Carriers in ‘Star Wars’ Would Be Obliterated in Real Battles, Say Military Experts

“The AT-AT is not the most effective design.” 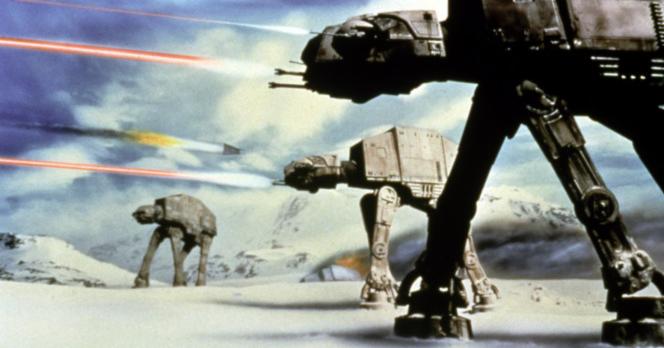 The All Terrain Armored Transport (AT-AT) troop carriers look positively badass tromping through enemy fire in the Star Wars universe. But, as you take in The Last Jedi this weekend, think about this: How would they fare in a real world battle?

Not well, at least according to military experts who pointed out their many egregious design flaws in the New York Post.

“One of the big disadvantages of legs is that they’re inefficient,” ASPI’s director of the Defense & Strategy Program, Dr. Andrew Davies, told the Post.

“The only reason that animals don’t have wheels is that there’s no way to make a bearing that rotates and that has blood vessels passing through it.”

Swap out those legs for, say, tank treads, and they’d be much faster.

“One … if not the only … advantage of legs is that you can step over things you can’t trundle over in a tracked vehicle,” says Davies.

“So they would work OK in terrain with lots of obstacles … the exact opposite of an ice planet, but hey!”

And then there’s the big issue with the AT-AT’s robotic appendages, which Davis says is the key vulnerability of any quadrupedal walking machine.

“Take out one leg, the whole thing falls over.”

Even if the legs aren’t targeted, there’s another problem: the boxy construction of the cargo area. The armor “slabs” on the sides would absorb—and likely be decimated by—armor piercing shells.

“Slab sides are to be avoided because (a) they make great targets for shaped charge rounds that penetrate and (b) they stick out like dog’s bollocks (that’s testicles to you) on radar,” Davies says. “Angled sides would be much better.”

As for weaponry, the AT-AT is well-equipped—for targets standing directly in front of it.

“The AT-AT is poorly armed—with guns only pointing forward, below a vulnerable crew compartment,” says Davis. “So the AT-AT can only attack on one front—and must move its head completely to target the weapons.”

“A better system would be turreted weapons, and on a large vehicle like the AT-AT, you could have a lot of turrets with laser weapons able to shoot down snowspeeders.”

Maybe these mechanized mammoths could defeat enemies with intimidation alone, but we doubt it.