The Aerosmith rocker also revealed what happened when he hit on Cameron Diaz, his daughter Liv Tyler’s best friend. 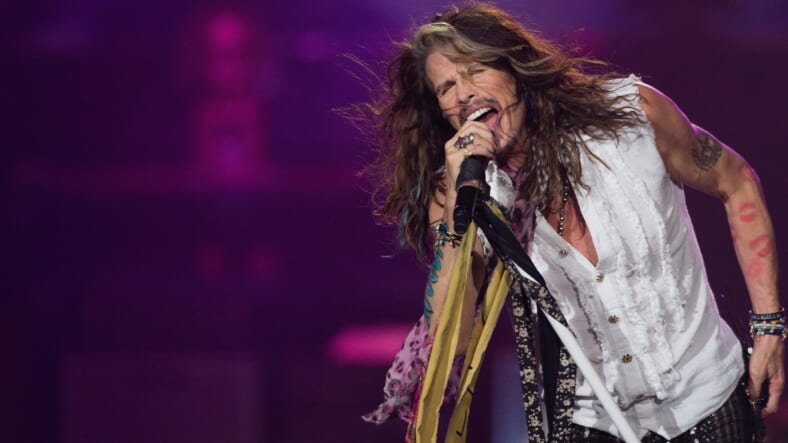 The 70-year-old Aerosmith singer was asked how much cash he’s blown on illicit substances during a “Spill Your Guts or Fill Your Guts” segment on The Late Late Show with James Corden.

“About $2 million, easy,” he said when faced with the option of answering the host’s question or chowing on pig head jelly. “I snorted half of Peru.”

Tyler delved even deeper into his wild past on a recent episode of the Joe Rogan Experience podcast. Apparently, the mind-bending combination of weed and apple wine aided him and lead guitarist Joe Perry in writing the signature Aerosmith track “Sweet Emotion.”

“We’d get so schwacked, so stoned on Boone’s Farm and weed,” he told host Joe Rogan. “And he [Perry] would play these licks… I would record that shit. That’s where these songs came from, and stuff would come out of my head.”

Through the haze, Tyler was somehow able to keep track of when he was doing which drugs.

“80s was a lot of the hard stuff—snorting heroin, snorting coke.” Tyler said. “60s was weed, drinking, getting jiggy with the English invasion.”

“The best part is when I got sober, I started writing even better shit,” he added.

He may be sober, but that hasn’t stopped the rock legend from womanizing.

Later in the Late Late Show game, he revealed that he’s hit on none other than Cameron Diaz, who happens to be the “best girlfriend” of his daughter, actress Liv Tyler.

“I look at this beautiful woman and I said ‘Cameron, should you ever need someone to take you to the movies or, like if I was to ask you to show me around London…'”

Liv wasn’t too pleased and gave her father “a lot of shit” for shooting his shot.

Can you really blame him, though?