“I was looking through at his f*****g head through a red dot like a video game.” 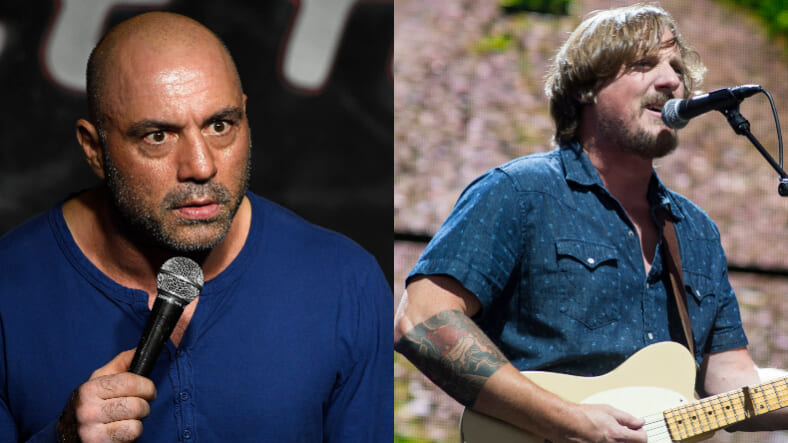 Johnny Cash may have crooned about shooting a man in Reno, but Sturgill Simpson really did almost kill a home invader at his Nashville residence.

The genre-bending country artist told the particularly harrowing tale on a recent episode of The Joe Rogan Experience podcast, on which he and his band appeared to promote the release of his already-acclaimed fourth album Sound & Fury.

Simpson recounted a remarkably scary stretch of time in which he had two break-ins in just 36 hours, as Bro Bible notes. Simpson says his dog scared an intruder off while his wife and kids were sleeping late one night—only to have the same dude come back 24 hours later.

For whatever reason my wife and the kids they had to go on down to where we actually live. I was working that week in Nashville – probably mixing a record or something so I just stayed behind.
As a result of me being home alone that day, I was cleaning and working on a firearm I’d recently purchased and assembled. I went to bed that night and locked everything up. Because they weren’t home, I put the gun on the floor on a padded case next to the bed .
The next morning – it’s like 7:15 a.m.—The sun is shining, my neighbor is going to work and I hear the back door open again. I was like, “What the fuck? That the maid? Who would be here that early?”
I guess out of paranoia, or whatever reason, I grabbed that gun and just went to the top of the stairs to look. I still think it’s the maid and when I hit the top of stairs and looked down the staircase – It’s the same guy, same clothes just standing in my living room rolling the cord up on my headphones.
I was almost impressed that he came back.
So I started down the stairs on him very quietly and I got about halfway down by the time he like turned and saw me.
I was looking through at his f*cking head through a red dot like a video game.
I’ll never forget that image of this guy, like probably thinking he’s about to die.
The back door was thankfully still open.
The only thing I said to him was, “What are we doing here, man?”


Things got really intense after Simpson used what is presumably a rail-mounted strobe light to stun the invader:

I hit him with a strobe, which kind of like probably to his brain was he thought was the gun going off because he kind of had a seizure and then I saw the adrenaline spike. He turned, went out the back door, and jumped clean off my fucking porch – never hit a single step and ran at the back gate. He had latched it. so he hit that back gate on a dead run – just like blew it the hell off, latches and wood splinters flying – and then took off down the alley.

Simpson continued, describing in head-spinning detail how quickly he had to decide whether or not to take what would have been a totally legal shot:

Going down the stairs, you would not believe how much shit can go through your head in like four seconds. I had this whole conversation with myself. Like “my wife and kids aren’t here, you don’t know this guy, this guy doesn’t even know I’m here. Yet I’m holding a fucking assault rifle and he’s not a threat to me but if I put one through his dome—which I have every legal right to do right now—there’s gonna be news vans on my lawn, this is gonna be on your fucking Wikipedia page.”

Simpson determined that the invader was not a threat and didn’t shoot. Ultimately, the criminal was was caught, at which point Simpson says he was subpoenaed to testify. He told Rogan about that experience as well:

Unluckily for him, he broke into like 13 other houses, and they had him on tape. So he had 13 or 14 aggravated burglary charges, which is pretty fucking heavy. He was looking at like 12 to 15 [years]… I think he sang like a bird, pleaded down and got six. I just realized, like, “Wow, they’re just throwing this kid’s life away.” Granted, he came into some people’s houses and almost got fucking killed. They caught him the next night, like three streets over in the act, doing the same thing.

Amazingly, as he ended the story, Simpson expressed nothing but sympathy for the wannabe burglar.

But he had no priors, he wasn’t on drugs. It was just like, [he had] no direction, no discipline, no guidance, no heroes. I struggle with that. What if I gave him a job?

What a guy. As for Sound & Fury, Rolling Stone praises the 10-song release as a “the most left-field, decisively non-country offering of Simpson’s career and precisely the record anyone who has been paying any attention to his career over the last several years would have expected him to make.”