‘Terminator 2: Judgment Day’ Is the Best Sequel Ever Made, And Yeah We’ve Seen ‘Godfather 2’ 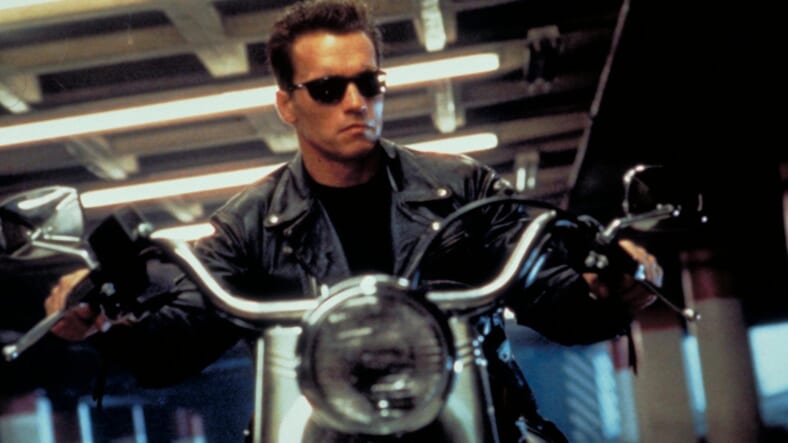 As we gear up for the rerelease of Terminator 2 in theaters (remastered in 3D and 4K resolution!) it got us thinking about sequels. Our final thought? Terminator 2 is the best sequel in cinematic history. You can tout the Godfather 2 or Spider-Man 2. You can even throw down a challenge if you want. The simple fact remains, T2 is the best. Here’s why.

The T-800 robot skeletons you see in the opening scene are actually animatronic, but T2 was a groundbreaking effort in computer generated imagery. So much so that the team actually won Oscars for both Special Effects and Make Up that year.

It’s no surprise. What Cameron and crew were able to accomplish in terms of visuals, especially that of the liquid-metal T-1000 enemy cyborg, were jaw-dropping at the time and laid the groundwork for much of the movie magic we’ve come to take for granted in modern blockbusters. Still, there’s something genuinely special about watching Robert Patrick’s T-1000 melt through prison bars. It’s a huge reason we’re excited for the theatrical release of the remaster.

The original Terminator movie helped make a name for Schwarzenegger — more than Hercules in New York, at least — and that helped springboard him into great leading roles in movies like Predator and Red Sonja. Then, when those movies also found box office paydirt, Arnie was able to really spread his acting wings by taking on roles in movies like Kindergarten Cop and Twins.

By the time Cameron had secured the rights and brought Arnold back for a follow up to The Terminator, we’re seeing a 44 year old, still-buff Schwarzenegger with a much more secure grasp on the English language (even though the role only had 700 words of dialog for him) and with comedy chops that let him deadpan lines like “chill out, dickweed.” Never mind the fact that Arnold actually rode that Harley Fatboy in his scenes, actually shot that shotgun (it tore the skin from his fingers until he mastered it) and really blew open the gate in the reservoir chase scene. Cameron and Schwarzenegger would collaborate again for True Lies, which we love, but it’s still not on the level with T2.

3. It fully realizes the world laid out in the original.

The Terminator posits a world controlled by machines, but it’s not until T2 that we actually see that world fleshed out fully, present and future. See, T1 was all about the night that Sarah Connor became a target, but T2 sees the repercussions of it all. Sarah’s institutionalization, John’s orphaning, nightmarish depictions of judgment day (scientists voted it the most accurate cinematic depiction of a nuclear detonation to date) and the butterfly effect style changing of fate that permeates the Connors’ lives are things that just weren’t possible before. T2 is the rare example of a sequel that somehow grows more highbrow than its predecessor.

4. It had a record-breaking budget.

Just because something costs more doesn’t make it the best, but the $102 million final budget of T2 did make it the most expensive movie ever made at that time. Cameron himself would outdo that record in his next three films (True Lies, Titanic and Avatar) but, when you adjust for inflation, no R-Rated movie has outperformed T2 even to this day.

Terminator was only Cameron’s second feature-length film at that point. For reference, the only movie he’d done up until then was a rather bad B-flick called Piranha Part Two: The Spawning… starring nobody you’ve ever heard of. After The Terminator, however, he went on to direct Aliens and The Abyss which were well received and remain respected.

Cameron’s own growth as a storyteller and filmmaker are evident in T2, giving fuller personality to the characters and rounding out the universe he created in the first film. His creative choices are evident across the board and he was even wise enough to acquiesce to other opinions in terms of scene choices, what to cut and how to end it. He also earned $5 million for his work on the film and, in our opinion, he was worth every penny.