30 years after they won the Super Bowl, ESPN takes an engrossing look at these Reagan-era NFL heroes. 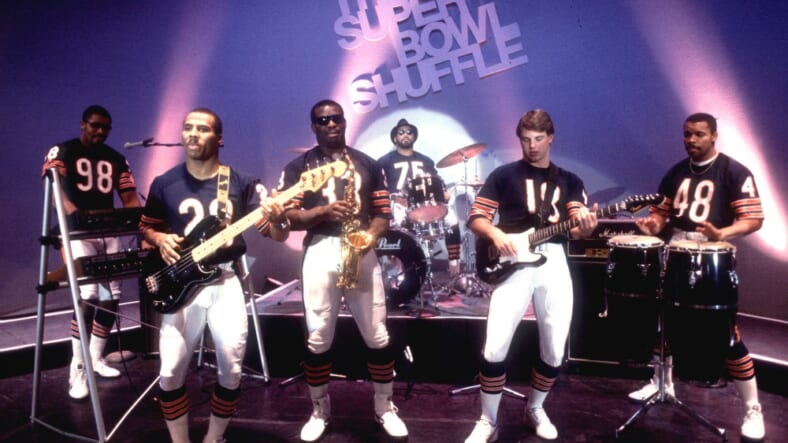 The 1985 Chicago Bears have long been wildly overexposed when it comes to books, documentaries and oral histories on Grammy-nominated novelty songs. The Windy City’s Bears fanatics are never more full of hot air than when discussing the “Super Bowl Shuffle” video, bizarre helmet thefts, Steve McMichael’s wrestling career or, well, The Refrigerettes. And let’s not get started on the commercials.

As a result, ESPN’s announcement that it was doing an umpteenth retrospective on these heroes of Halas Hall was no doubt received with ambivalence/annoyance from football fans outside the 312 area code, while met with great joy from anyone who’s ever pissed on an ice-filled trough within Soldier Field’s infamous men’s rooms. And while yours truly is firmly ensconced within the latter camp, the former lament is legit: What’s left to be said about these Reagan-era Monsters Of The Midway ™?

The answer is a helmet spear to the solar plexus of both skeptics and Bears Super Fans alike.

The ’85 Bears premieres on ESPN February 4 and is directed by Emmy- winning 30 for 30 vet Jason Hehir—with the executive producer/narrator role being filled by Chicagoland native Vince Vaughn.

“Vince was generous with his time, his Bears expertise, his energy and his feedback,” said Hehir, who spoke with Maxim while adding the finishing touches to the film just two weeks before its premiere. “Both he and Peter Billingsley [Vaughn’s fellow EP and “Ralphie” of A Christmas Story fame] are tremendously successful, yet they treated this project as if they were young, hungry producers.”

The result is jam-packed with the surviving squad’s impassioned arguments regarding their own greatness, juxtaposed with hard-to-stomach examples of the lasting effects that come from playing for the National Football League. And it is Goddamn brilliant.

The drama begins with former Bears defensive coordinator (and Keith Richards to head coach Mike Ditka’s Mick Jagger—but with even more bickering), Buddy Ryan, at his farm in Shelbyville, Kentucky. Rex and Rob’s legendary dad, who is a barely audible, stroke and cancer surviving, hard-to-watch 81-year-old shell of his former shit-kicking self. And the riveting narrative doesn’t let up from there.

As a native of the Chicago suburbs who was issued a Walter Payton jersey at birth while also a tyke ticketholder during 1988’s infamous Fog Bowl (we, the eyewitnesses, recall landlocked clouds rolling over Soldier Field’s scoreboard out onto the field, like some sort of midwinter tidal wave): I didn’t think there were many new ’85 Bears facts this 30 For 30 entry could teach me.

But the doc’s newly-revealed nuggets include how the 1986 Challenger disaster (which occurred just two days after the Bears won the Super Bowl) tempered the team’s victorious media blitz; how disgusted Payton was with the offense’s inability to rely on anyone but him during his pre-’85 greatness as well as intriguing new thoughts on old players. (Ditka: “Joe Montana was the perfect for the 49ers, and [Bears quarterback] Jim McMahon was perfect for us”).

I’ll spare you most of the already overstated stats behind the ’85 Bears’ storied glory…but lets be clear: These soldiers of Soldier Field racked up back-to-back shutouts in the playoffs—adding to the pair they got during the regular season—alongside an underappreciated offense that averaged 28.5 points per game.

As this film makes abundantly clear, the fabled 46 defense can best be summed up with another number: two. As in the two seconds an opposing team’s quarterback had to get rid of the ball before succumbing to either a minor, or very major, injury. And succumb they did.

The doc notably glosses over already well-known anecdotes one might find in any official NFL Films retrospective, while focusing on the warts-and-all aspects that commissioners from Pete Rozelle to Paul Tagliabue to Roger Goodell—all would’ve frowned upon.

“Probably the hardest part about making this was that NFL Films limited us to twelve total minutes of NFL-owned footage for a hundred minute doc [writer’s note: what a bunch of dickheads], so we weren’t able to go as in-depth into the on field stuff as I’d have liked,” lamented Hehir. “Whenever you see a still photo depicting game action—that’s why.”

To wit: Less with the endless odes to Payton’s greatness and more with Sweetness’s disgust at being the final game’s scoreless decoy.

“If a superstar running back today were perceived as pouting after a Super Bowl win because he didn’t get a touchdown, the criticism would be merciless,” noted Hehir. “I was really curious as to how a guy seen as the epitome of class could be so upset about an individual achievement during the highlight of his football career.”

Second example: The interviews touch on Mike Ditka’s tenacity coupled with a lot of acrimony directed towards Da Coach by way of his old underlings.

“There are probably some players who hold a grudge against Ditka for one reason or another,” added Hehir, “but I found [Ditka’s] candor and self-awareness to be a pleasant surprise.”

Thirdly: Barely a mention of the aforementioned ‘Super Bowl Shuffle’ versus a whole LOT of mentions about these hard-partying lunkheads’ many saloon scuffles.

“We would’ve paid more attention to the ‘Super Bowl Shuffle’,” noted Hehir, “but the woman who owns the rights to the song had demands that were so outrageous we were forced to walk away.”

And finally: A smaller focus on the Bears us-against-the-world mentality coupled with a bigger spotlight on the infighting that first helped to make, and then eventually destroy, this team of teams.

“We also had a whole section about the ’84 Raiders game, when [Jim McMahon] lacerated his kidney,” admitted Hehir, regarding the NFL limiting content the doc could carry, “that we had to cut.”

The brutal 21st century perspective begins, and certainly doesn’t end, with safety Dave Duerson’s, (aka “Double D”) chronic traumatic encephalopathy-induced suicide and McMahon’s (aka “The Punky QB”) ongoing battle with early onset dementia. It’s rough to watch, and should be required viewing for any father about to sign their son up for a local Pop Warner league.

Chicago prefers to remember the immortal ’85 squad as invincible rather than invalids, but on the 30th anniversary of the city’s single Super Bowl win, perhaps that’s the problem.

Hehir ends his opus with the bookend that is yet another scene set at Coach Ryan’s ranch where Singletary (why Samurai Mike hasn’t scored a post-Niners head coaching job is beyond me) pays his old mentor a visit.

“With the help of some of the players, we were lucky enough to go to Kentucky and visit [Buddy],” said Hehir, “and the material we got there felt powerful enough to open and close the film.”

I’ll spare you spoilers, but know this: Even Packer Backers will need a spare tissue for this game’s tear-jerker of a fourth quarter.