“People would do lines of coke like you wouldn’t believe—we’re talking like an eighth of an inch and three inches long—like vacuum cleaners.” 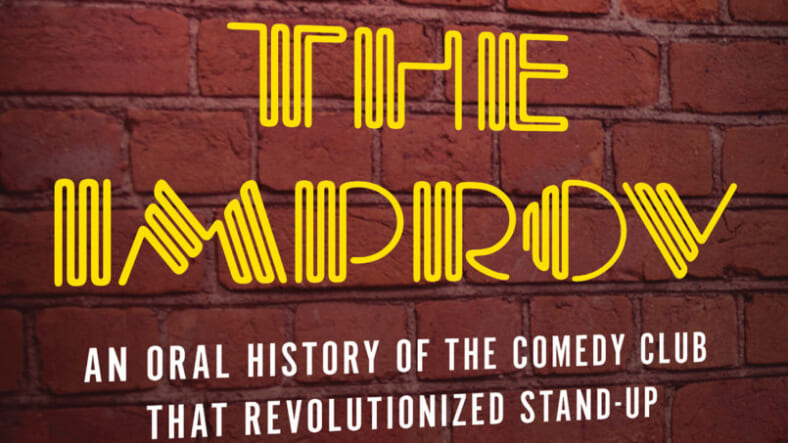 In 1963, 30-year-old Budd Friedman—who had recently quit his job as a Boston advertising executive and returned to his hometown of New York to become a theatrical producer—opened an after-hours coffee house for Broadway performers called the Improvisation.

Despite its immediate success, Budd’s Broadway-centric vision for the Improvisation—shortened early on to the Improv—was altered substantially as comedians began dropping in to try out new material.

In the years that followed, the Improv not only became the template on which all of today’s Comedy Stores, Laugh Factories, and one-off hot spots across the country are based, but also birthed the art of stand-up as we now know it.

In Budd Friedman’s tell-all book, The Improv: An Oral History of the Comedy Club that Revolutionized Stand-Up, Friedman—along with a Who’s Who of his most famous alumni—tells it like it was in the first-ever oral history of how this game-changing comedy club came to be.

Get a sneak-preview of the crazy, cringe-worthy, and downright dirty tales as told by the show-business veterans who were there to witness them first hand with Maxim’s exclusive excerpts below.

On Rodney Performing Shit-Faced, as Told by Budd Friedman

When Rodney walked in, there was no resemblance whatsoever to the urbane Ivy League type the New York Post had described. Instead—and to put it absolutely bluntly—he was shitfaced. Dressed in a wrinkled suit and wearing a stained tie that dangled loosely around his neck, I could immediately smell the booze on his breath as he staggered in, even though I was standing in the opposite direction.

When he spoke, his words were slurred. I forget what was said, but with the review still fresh in my mind—and in spite of his inebriated condition against what ultimately proved to be my better judgment—I put him on anyway and he absolutely bombed. And so badly, I should add, that you could literally feel the chorus of boos ricocheting off the walls as customers began asking for their checks and clamoring to leave.

But then, he came back in again the next night stone sober and asked to go on again. It’s like somebody had put him up to it on a dare. And you know what? After I reluctantly relented, this time he killed it, as if to say, “I’ll show these people.” And in as much as his first set was one of the biggest flops I’ve ever witnessed, the second one was also one of the most spectacular comebacks I have ever seen.

On Doing Blow at Dangerfield’s, as Told by Bob “Uncle Dirty” Altman

I knew Rodney from the Improv, of course, but then when he opened his own club, Dangerfield’s on First Avenue in New York, we all used to go over there and get high down in the basement.

People would do lines of coke like you wouldn’t believe—we’re talking like an eighth of an inch and three inches long—like vacuum cleaners.

On Rodney Convincing Bill Cosby to Do a Set, as Told by Budd Friedman

One of the most unforgettable evenings at the Improv was the night he emceed with Bill Cosby in the audience.

Cosby was already an established comedian by this point, having also broken the race barrier to become the first African American prime-time television star on the NBC action-adventure series I Spy. I’m not sure what the occasion was or who was with him that night, but Bill Cosby was one of those people you didn’t ask to perform, so I didn’t even bother trying.

But Rodney never had any inhibitions as far as that was concerned. He just kept goading and goading him, until finally Cosby got up and went on for thirty minutes. It was amazing.

On Larry’s Nervous Relationships With Women, as Told by John Debellis

When we weren’t discussing writing or baseball, most of our conversations were about women. I don’t want to say we were afraid of them, but we were both painfully shy and so we’d talk about how much we got rejected. Basically it was this mutual feeling we shared that we might get a woman or two, but if we did, they weren’t going to stay with us or we weren’t going to stay with them.

Larry also had this obsessively neurotic laundry list of preparations he’d go through before he went out on a date, like shaving. Then he had this thing about going to the bathroom—not the physical act of actually going, but being able to find one if nature called.

Larry did have this one girlfriend named Anna for a while and she was really pretty. So, when he did date, he went out with women that were hot, but they were few and far between.

On Larry’s Neuroticism, as Told by Bob Zmuda

Larry was just so completely neurotic and unhinged. I remember one night when he was up onstage, Chris Albrecht and I were standing in the back of the room and we started laughing our asses off—which is what you’re supposed to do at a fucking comedy club.

Afterwards, Larry went ballistic. He came up to us and started screaming at the top of his lungs, “Why are you guys laughing at me?” He was one of the last guys you’d have ever predicted would make it big.

On Larry’s Mid-Set Run-In With His Cousin, as Told by Billy Crystal

So one night, Larry and I were sitting at the bar waiting to go on when this woman came up to him and said hello. All of a sudden, Larry got this panicked look on his face. Then he turned to me and said, “Oh God, that’s my cousin, Billy. I can’t go on. She’s my cousin and I can’t stand her.”

Well, right about then, Budd came up to him and said, “Larry, you’re on.” So Larry went on, but as soon as he picked up the mic, the first thing out of his mouth was, “I can’t do this, Budd. Take me off.” I swear, he was onstage for maybe thirty seconds and it was hilarious. He just didn’t like this relative.

One of my craziest— and scariest—Improv stories was the night some guy gave me $34,000 in cash for a Rolls-Royce. That was how much they cost back then. I delivered the Rolls to this guy and he gave me the biggest wad of cash I’d ever seen in my life. Then I picked up another car, but instead of going back to Boston, I impulsively decided to drop in to the Improv and do a set.

I distinctly recall bringing the money into the club with me and holding on to it until it came time for me to go on. This is when I put the money on top of the piano.

Then I did my set—and it was probably one of the best I’d done yet—because I was absolutely on cloud nine. Afterwards, I got back into the Rolls, which was parked on the street and thankfully hadn’t been stolen or vandalized, and drove off.

As soon as I got out of Manhattan, I began listening to my set on the tape recorder I always carried with me, still on this incredible high from how well I’d done. I was driving along, replaying the tape over and over, until I made it all the way up to Greenwich, Connecticut, which is where the tollbooth was.

When I reached into my pocket to take out some change for the toll, it suddenly hit me that I’d left the envelope with the $34,000 in it on top of the piano at the Improv. Immediately, I turned the car around and drove back. My mind racing along with the car, I must have gotten there within the hour.

All I could think of was how I was going to explain to my boss that I’d lost thirty-four grand. It was horrible. But when I parked the car in back of Dykes Lumber Company and raced back into the club, to my complete surprise the money was still on top of the piano.

There were about eight people left in the audience and a young woman was onstage singing. Relieved but still shaken, I made a beeline for the stage and said, “Excuse me, I forgot my lunch.” Then I took the envelope and left. God, it was scary.

On Sleeping Next to Prostitutes, as Told by Jay Leno

A lot of times, instead of driving back to Boston, I’d finish up at the Improv and sack out in the backseat of whatever car I was driving, which I usually parked in the alley of Dykes’, adjacent to the back of the club.

On this particular night, I was exhausted and I remember being just about to drift off to sleep when suddenly this prostitute brought one of her clients into the alley and they started doing whatever they were going to do.

Suffice it to say that there was a lot of moaning and groaning going on, and it was one of the grossest conversations I’ve ever heard. I can still picture it like it was yesterday. I remember thinking to myself, “Is this what show business is all about?” It was pretty depressing.

Get your copy of “The Improv: An Oral History of the Comedy Club that Revolutionized Stand-Up ” by Budd Friedman when it hits shelves September 19.