“It’s nice to be important, but it’s more important to be nice.” 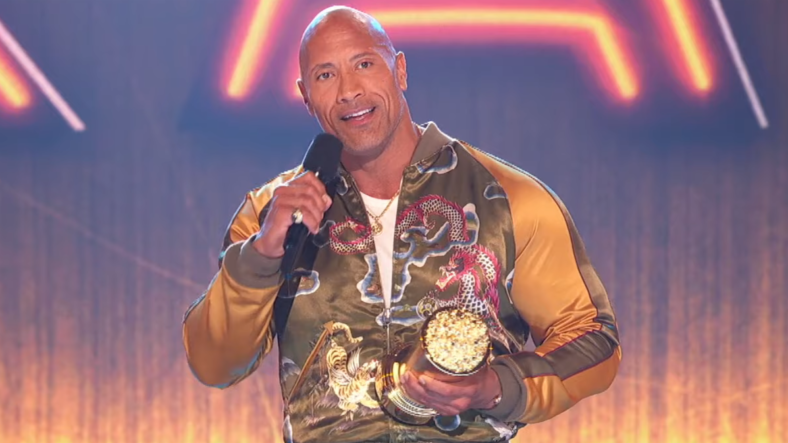 Host Zachary Levi introduced the former WWE star-turned-Hollywood rainmaker by rattling off a list of his most impressive achievements followed by a montage of his fan-favorite moments from television and movies.

Dressed in an olive-gold bomber jacket with animal accents and burgundy slacks, the half-Samoan superstar performed traditional tribal routine with a dance troupe fittingly set to Queen’s “We Will Rock You.”

Upon grabbing the mic to accept the Generation Icon Award, the Hobbs & Shaw co-star dished out the requisite thank yous to choreographers, his wife and his daughter before launching into a body-positive anecdote about his transition to acting.

“When I first got to Hollywood — Hollywood, they didn’t know what the hell to do with me. I mean, I was this half-black, half-Samoan and six foot four, 275-pound pro wrestler.”

“So, Hollywood conformed to me and here I am with all of you getting the Generation Award. Holy shit,” Johnson said in front of the raucous crowd.

“What you saw here tonight, that’s who I am. I’m proudly half-black and half-Samoan and I wanted to bring those cultures here for the world to see. So yes, it’s important that you are your most authentic self,” he added in reference to the Samoan dance.

“I’m a walking example of that, but here’s the thing that I want to share with you guys – that’s not enough. Because there’s another side to being your authentic self, your true self – and that’s the side that the magic is on. That’s the side that’s gold.”

“While yes, it’s important to be yourself – you’ve got to recognize the joy and the responsibility of bringing everybody with you. And you do that by being kind, by being compassionate, by being inclusive and straight up just being good to people because that matters.”

Lastly, Johnson left the audience with a piece of advice that we can all get behind.

“When I was 15 years old, I heard a quote and I will never forget, and I bring it with me everywhere I go and it’s ingrained in my DNA,” he explained.

“The quote is this: ‘It’s nice to be important, but it’s more important to be nice.’ With that, I love you. I thank you. Drink your tequila. I will see you all down the road.”