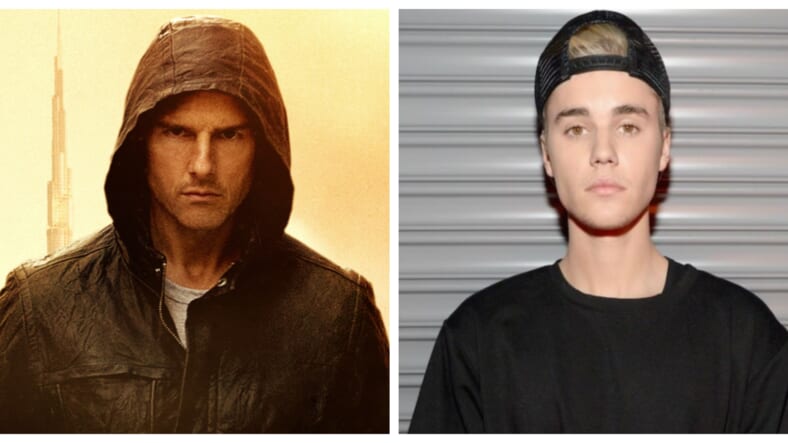 Even the fittest men slow down a little in their fifties. Reaction time isn’t as good, and injuries don’t heal as quickly. So if you’re fifty-something, fighting a man who is 31 years your junior in the Octagon doesn’t sound like a great idea.

Then there’s Tom Cruise and the 31-years-younger Justin Bieber, who not too long ago used Twitter to impulsively challenge Cruise to a fight.

I wanna challenge Tom Cruise to fight in the octagon. Tom if you dont take this fight your scared and you will never live it down. Who is willing to put on the fight? @danawhite ?

While the action star hasn’t aged externally in 25 years, the truth is he’s 56 and Beebs is 25. It would almost be elder abuse if Bieber took on Cruise, right?

Well, it seemed like a flash in the pan shortly after Bieber dropped the taunt, as the pop star backpedaled big time, telling TMZ he “was just playing” and that he was  “pretty sure Tom would…I think he would…he would probably whoop my ass.”

“I think he’d probably be out of my weight class,” Bieber continued, “He’s big, you know? He’s got that dad strength.”

Bieber is 5’9″ and Cruise is 5’7″. However, Bieber appears pretty slim and not too buff in recent interview videos and Cruise simply stays in peak physical shape. He does all his own damn stunts, and they are serious stunts. If you’re concluding that everyone came to their senses and actually realized in this case the young guy might not have a prayer, you might be wrong.

According to Dana White, the prospect of a Cruise-Bieber smackdown is more of a reality than common sense dictates it should be. Reps from Cruise’s agency and Bieber’s agent Scooter Braun actually talked about it and brought White in as well. Here’s what PopCulture.com reports White had to say:

… “As crazy as that sounds, that is true. … I don’t want to use any names, but I was at home on a Sunday, and I got a call with two big guys on the phone. They were telling me this could possibly happen and this could be real. I’m like, there’s no way that this is really going to happen. But if it does, call me back. I’m in.”

MMA Junkie quoted White on the nature of — and profit potential in — a match like this:

“Oh my god, it would be massive,” White said. “It would be massive. Everybody laughed when we talked about this, so you’ve heard of it. Who wouldn’t watch that? Everybody would watch it. It’s a complete train wreck, and I love it, and I’m in. I’m in. …“I can’t even believe this is what we’re talking about right now.”

Laser-focused, painfully intense Tom Cruise, who has only had the mildest of public blowups ever, a man noted for his age-defying vitality. Musically gifted but troubled, immature Justin Bieber, who has had some pretty dumb run-ins with the law. Physically they’re actually close to the same size, so no weight class differences, nope.

If we had to answer the ‘who ya got’ question seriously, it’d be Cruise by a punch to the kidneys. Then maybe a warm Dad Hug and admonishing wag of the finger.

But honestly, the whole thing seems kind of pitiful at the moment, so we’re counting on mercy winning in the end, and us not hearing about this again.