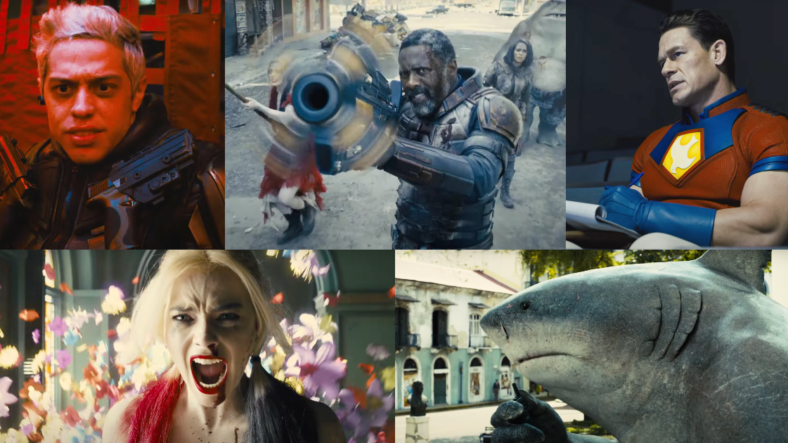 At one point in this freaky new trailer for James Gunn‘s The Suicide Squad a character tells Idris Elba‘s Bloodsport that the big bad the world is facing is essentially worse than anything he can imagine and she asks, “Are you in or out?”

He’s obviously “in” and we are too, after watching this preview for the freaky reboot. It’s got everything: King Shark, Margot Robbie‘s brilliantly scary Harley Quinn, and SNL’s own Pete Davidson sporting lots of guns and sitting beside a dog-person. Or weasel person. Just watch the video.

Here’s the synopsis from Warner Bros:

Welcome to hell—a.k.a. Belle Reve, the prison with the highest mortality rate in the US of A. Where the worst Super-Villains are kept and where they will do anything to get out—even join the super-secret, super-shady Task Force X. Today’s do-or-die assignment? Assemble a collection of cons, including Bloodsport, Peacemaker, Captain Boomerang, Ratcatcher 2, Savant, King Shark, Blackguard, Javelin and everyone’s favorite psycho, Harley Quinn. Then arm them heavily and drop them (literally) on the remote, enemy-infused island of Corto Maltese. Trekking through a jungle teeming with militant adversaries and guerrilla forces at every turn, the Squad is on a search-and-destroy mission with only Colonel Rick Flag on the ground to make them behave…and Amanda Waller’s government techies in their ears, tracking their every movement. And as always, one wrong move and they’re dead (whether at the hands of their opponents, a teammate, or Waller herself). If anyone’s laying down bets, the smart money is against them—all of them.

Gunn has proven with Guardians of the Galaxy that he really knows his way around that peculiar blend of comedy and action that makes superhero — or in this case, supervillain — movies pop off the screen. Will this be a palate cleanser from the previous Suicide Squad?

Too soon to tell, but with a cast that includes Elba, Robbie, and Davidson as well as John Cena, Joel Kinnaman, Jai Courtney, Peter Capaldi and Michael Rooker it’s looking pretty promising.

James Gunn’s The Suicide Squad will hit theaters and HBO Max on August 6, 2021.