Because sometimes Dad needs a drink. 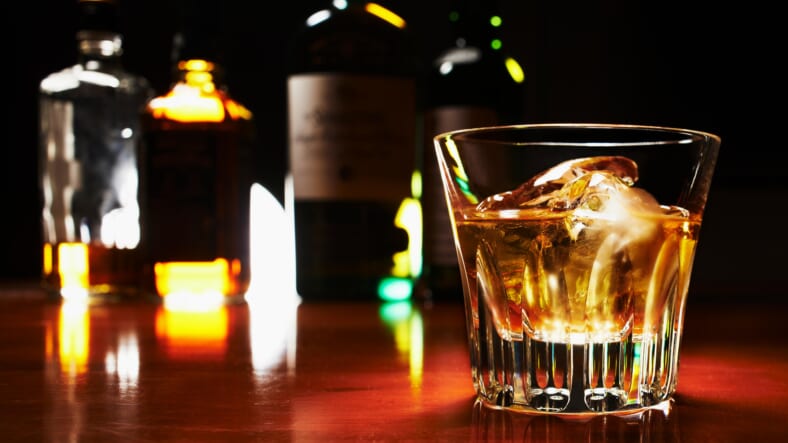 Dads can be difficult to buy gifts for, but a nice bottle of booze always seems to do the trick.

Sure, there are plenty of worthwhile options that don’t cost a lot, but Father’s Day is a good excuse to spring for something a bit more expensive to show your appreciation for your dad.

Here are 15 higher-end bottles of spirits and champagne that would make the perfect Father’s Day gift.

Australian whisky hasn’t quite hit it big yet here in the States on the scale of Japanese whisky, but that could change over the coming years.

Enter Starward Nova, a single malt whisky from Melbourne that is fully aged in red wine barrels. How long exactly? Well, the distillery says three “Melbourne years” – which is open to interpretation since what this really refers to is the drastic temperature shifts that can occur there over the course of one day.

Regardless, this is a fruity and spicy single malt that should appeal to scotch drinkers. $55

Wolves Whiskey is a curious spirit that at first glance seems to be more about the packaging (sheepskin leather on the bottle, limited edition Douglas fir presentation box) than the liquid. But take a sip and you’ll soon realize there was care put into the expression, a project spearheaded by sneaker and fashion icons Jon Buscemi and James Bond.

It’s a blend of MGP rye with two whiskeys distilled at California’s Charbay Distillery from Bear Republic beer – an 8-year-old stout whiskey and a 5-year-old pilsner whiskey. Hoppy beer notes shine through a rich fruit and baking spice undercurrent, elevating this above your average craft whiskey. First Run sold out pretty quickly, but sign your dad up here for the soon-to-be-announced Second Run. $150

You know it, you love it… even it’s often incredibly hard to find, and expensive when you do. Michter’s new 10 Year Single Barrel Bourbon, a limited release offering from this Kentucky distillery, is as good as always.

The carefully sourced liquid is the first release under the direction of new master distiller Dan McKee, who recently took over for Pam Heilmann. Caramel, candied apple, vanilla, and a touch of smoke permeate every sip of this luxurious bourbon. $130

Let’s be honest; Booker’s is Booker’s. What this means is that there are technical and flavor differences between each batch, but most people would be hard pressed to explain exactly what they are. But who really cares?

Booker’s is a dependable barrel-strength bourbon from Jim Beam that is readily available. The second edition released this year is called Shiny Barrel Batch, named after what happened to honey barrels back in the day when rickhouse workers leaned up against them to sneak a sip. This release is 124 proof and almost six and a half years old. $80

$1,500 for a bottle of Woodford Reserve? Well, what you are really paying for here is the Baccarat crystal that the whiskey is encased in. But the liquid itself is a tasty sipper, a bourbon that has spent some quality time finishing in XO cognac casks, where it picked up nice notes of candied fruit and dry spice.

For the next year, it will be available exclusively in travel retailers. So go ahead and pick up a bottle with that extra cash you saved by not checking a bag, not eating or drinking, and sitting in a middle seat on your next overbooked flight. $1,500

Bardstown Bourbon Co. is different from most of the other distilleries in the area, from the modern look of the actual building and the bar/restaurant located within to the approach taken with the whiskey it is sourcing, distilling, and bottling.

There are three recent releases, including the new Fusion Series #1. The makeup of this whiskey is a blend of 11-year-old sourced wheated Kentucky bourbon with 2-year-old high rye bourbon and 2-year-old wheated bourbon made at the distillery. $60

You have to travel to the actual distillery to get your hands on some whiskey. Such is the case with Hillrock Estate’s Triple Cask Rye, 220 bottles of which will be available to purchase on Saturday of this Father’s Day weekend.

If you are in New York’s Hudson Valley, consider this single barrel, 102-proof rye made from grain grown on the estate and aged in char #3 and #4 barrels before being finished in a port cask for 70 days. It’s rich and fruity with a nice subtle caramel note hovering beneath. Releases tend to sell out, so arrive early if you are interested. $130

The Macallan Estate is a first for the distillery, a whisky made partially from barley grown on the scenic Easter Elchies estate where the newly redesigned distillery is located (this barley is normally reserved for more expensive releases).

The whisky immediately reads as Macallan, meaning that the sherry influence hits you first and foremost. But there’s a bit more spice present than usual, and perhaps it’s not quite as sweet. Ultimately, you are paying for the story of the whisky’s provenance and the nicely designed gift box that comes with some beautiful photography. If your dad is a true Macallan fanatic, he’ll appreciate this single malt. $250

The Balvenie Stories Range – The Sweet Toast of American Oak, A Week of Peat, and A Day of Dark Barley

There are three new whiskies from The Balvenie to choose from, each with its own unique character, intricate name, and price point. The first is The Sweet Toast of American Oak, a whiskey aged in bourbon barrels for 12 years and finished in virgin toasted American oak.

The second is the 14-year-old A Week of Peat, which doesn’t differ much from Balvenie Peat Week, but is subtly smoky and wonderful all the same. Finally, there’s longtime malt master David Stewart’s creation A Day of Dark Barley, a 26-year-old whisky distilled from dark roasted chocolate malt. $60 (Sweet Toast), $100 (Week of Peat), $800 (Dark Barley)

People have been freaking out about the price of this whisky, but in reality it’s not that different from similarly aged single malt scotches. It’s just that the whole Orphan Barrel shtick can wear a bit thin with stories about finding lost barrels and such.

In this case, though, the brand has been very forthcoming about the details of the whisky. This single malt, the first ever from the Orphan Barrel line, is a tasty whisky from the defunct Pittyvaich distillery (it closed in 1993). According to the tasting notes, look for flavors of vanilla cream and “distant orange peel.” $400

Fancy something new in the Irish whiskey category? There is plenty to choose from, but some particularly stand out. One is The Tyrconnell’s new 16-year-old single malt finished in casks that were seasoned with both oloroso and moscatel wine from Spain.

This isn’t the first time the brand has released a cask-finished expression, but this one certainly seems to be the most unique of the bunch. According to the distillery, expect notes of jasmine, dark chocolate, and grapefruit throughout. $100

Balcones is one of the most innovative craft distilleries in the country, and one that really has made Texas whiskey a respectable category.

The latest addition to the Waco distillery’s core range of whiskies is Pot Still Bourbon, aged for two years and distilled in the titular pot stills as opposed to the column stills many bourbons are produced in. The mash bill is a mix of Texas grains, including blue corn, wheat, rye, and malted barley. $30

This new release from the Champagne Bollinger house is a 2008 vintage that was fermented in barrels. It is made up of 71 percent pinot noir and 29 percent chardonnay, with a relatively moderate dosage of eight grams per liter.

It has proven to be a very popular new champagne, so much so that in April Bollinger decided to pause on further releases of the magnums. Take a break from the whiskey and sip some of this bubbly with your dad this Father’s Day. $170

The first thing you’ll notice about Grand Mayan Tequila is the beautiful bottle that the liquid comes in: a hand-painted piece of art with 14-carat gold lettering. Of course the liquid within should match the outer appearance, and in this case it absolutely does.

The newest expression, joining the Ultra Aged and Silver, is the Reposado. The tequila is aged for six to eight months in French and American oak, adding luxurious notes of vanilla and oak to the sweet, earthy agave. This is a delicious tequila you can sip all night long, and it’s probably best not to waste it in a cocktail. $80

The latest from Grand Marnier was named after the creator of the brand, Louis-Alexandre Marnier Lapostolle.

For this release, master blender Patrick Raguenaud combined 82 percent cognac aged in French oak in Bourg-Charente with 18 percent orange liqueur – a much higher ratio of cognac than regular Grand Marnier. Pour this over a large ice cube and enjoy with a strong espresso after dinner. $70