Pop a bottle with your pops. 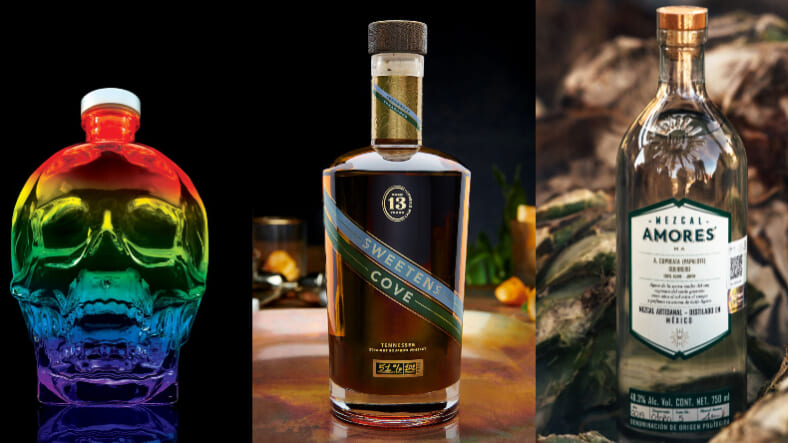 Here are eight affordable, unexpected spirits and accessories to gift the man you owe your life to — just make sure to order soon, so you can pop the bottle together on Sunday, July 21.

Colorado’s Distillery 291 was born when Michael Myers, a New York photographer gaining fame in the fashion game, pulled stakes and moved West after 9/11. How Myers managed to start crafting some of the best whiskey in the West is a mystery for the ages, but his small batch Colorado Bourbon (80% corn, 19% rye, 1% malted barley) is a sensual treasure — deep in color, rich in vanilla and honeycomb notes and boasting a luscious mouthfeel. Thank the small (10, 15, and 30-gallon) virgin white oak barrels he ages only one year in, allowing lots of wood interaction in a relatively short time frame, as well as the local toasted Aspen staves he throws into the barrels for good measure (and touch of terroir). $107

This striking bottle is perfect for the dad who loves vodka and also wants to support the LGBTQ community. To celebrate PRIDE month the already super cool-looking Crystal Head skull bottle gets a remix in hyper-colorization with a rainbow glass twist. The award-winning Newfoundland spirit — Double Gold Medal at the San Francisco World Spirits Competition, Gold Medal for Excellent Taste at Russia’s PRODEXPO where they know vodka — briefly updates its look with this limited-edition PRIDE BOTTLE, which will only be available until next month, so act quick. $50

Give pops a taste of Hawaii, especially since he probably can’t go there IRL anytime soon. Celebrating its first decade in production last year, Koloa Rum Company produces artisanal, single-batch rums including Coconut and Coffee expressions beyond the more common core White, Gold, Dark and Spice options. Their new Kaua`i Reserve Four-Year Aged Hawaiian Rum might just be their best, however, crafted to sip neat or on the rocks. Brewed in Kaua i’s Kalaheo Distillery, only 3,500 bottles will be sold for every 12-barrel batch, each bottle individually numbered and inspected. Pick up at Mel & Rose and Drizly, among others. $50

For the dad who loves the Broncos, Colts, NY Giants, football, golf or really sports of any kind, you’d be hard-pressed to find a better bottle of brown than Sweetens Cove. With backing by Peyton Manning (and his brother Eli and tennis great Andy Roddick), Sweetens Cove is a one-off Tennessee bourbon. Sure it’s got a high price point, but this is rare juice: a 100-barrel stash of exquisite 13-year old bourbon found in a dusty Kentucky warehouse, expertly blended by Kentucky’s first female Master Distiller since Prohibition, Marianne Eaves. The whiskey is an homage to a remote 9-hole golf course at the end of a gravel road in Tennessee’s Sequatchie Valley, dubbed golf’s “Field of Dreams.” Apparently you start each game with a shot of whiskey, and that’s where the Manning Brothers got the inspiration for Sweetens Cove. Give dad a shot before he recreates his own Field of Dreams in your backyard. $200

Every father has earned a bottle of absinthe and a spirited visit among the green fairies, if only to forget the damn trauma you put him through. Our recent favorite comes from the St. George distillery in Alameda, NoCal. With no artificial ingredients or colors, Absinthe Verte was the first American absinthe with real wormwood released after the U.S. ban lifted in 2007. St. George didn’t start distilling absinthe in 2007, however, but rather they had already perfected their recipe over 11 years of experimentation (while absinthe sales were illegal before that, production was not). Other natural ingredients over their double-infusion process include fennel, star anise, mint, tarragon, opal basil, lemon balm, hyssop, and stinging nettles. Potent at 120-proof, keep an eye on dad as he trips the light fantastic. $20

We’re big fans of mezcals, and have certainly suggested a lion’s share of agaves worthy of seeking out. While some bottles are really hard to find in this rarefied world of small batch producers, Amarás makes both a delicious and eco-friendly option (rated top 3 most sustainable mezcal with microloans, reforestation programs, economic initiatives, etc.). Currently working with 18 Maestros across three states (Oaxaca, Guerrero and Durango) and utilizing cultivated agaves like Espadín, Amarás’ more rare Cupreata expression utilizes the papalote agave sourced from Guerrero for a delicious, smooth and approachable mezcal. $60

You can have all the bottles in the world, but without a proper bar set you’re left empty handed. For the Gentleman Rogue in your life pick up Duncan Quinn’s essential cocktail-ing Skull Bar Set. Known almost as much for his bespoke suits as he is for his scoundrel lifestyle, DQ’s 5-piece stainless steel cocktail set — including 18-oz shaker, double jigger, ice tongs, strainer and swizzle stick — comes emblazoned with his signature Smoking Skull logo, all beautifully packaged in a black wooden box. Perhaps the best part is purchase enters you into the world of the Duncan Quinn Concierge service, where the entrepreneurial Scot will help you source everything from rare vintage watches and wine to curating bucket list trips to Land Rover across Africa. $175

If your dad is anything like us, he spent many a night of quarantine working on his mixology game, perfecting everything from the Mezcal Mule to the Breakfast For Dinner. To elevate his gameplay to the next level buy him a suite of Cocktail & Sons syrups handmade with real 100% Louisiana sugarcane — what C&S dub complex syrups for simple drinks. All are made with a specific flavor profile and cocktail in mind that founders Lauren Myerscough and Max Messier narrowed down after a combined 20 years tending bar.

For instance the Spiced Demerara (coriander, wild cherry bark, cassia and orange peel) compliment barrel-aged spirits and the Old Fashioned. The Oleo Saccharum was crafted with clear spirits, punches and Collins in mind. There’s Honeysuckle & Peppercorns for Margaritas, and Watermelon & Thai Basil for summer cocktails, while the Mint & Lemon Verbana is the most versatile and closest to a simply syrup. These turnkey syrups will subtly transform even something as simple as a mojito into a $20 cocktail. $15