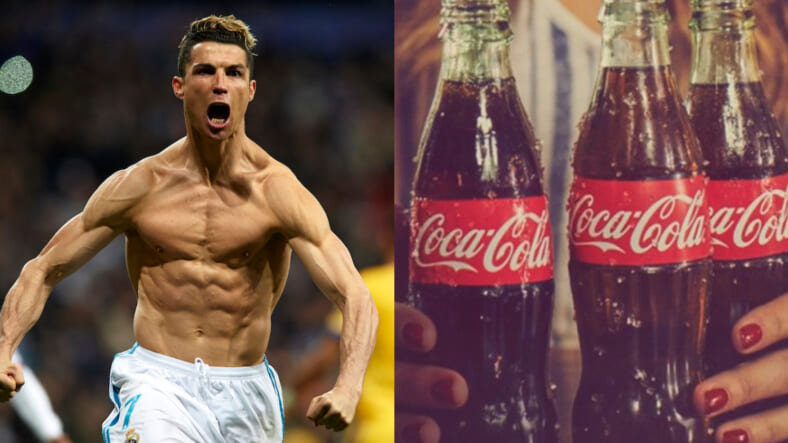 Even after Coca-Cola removed the last traces of cocaine from its formula in the early 1900s it remained a deeply embedded part of pop culture around the world, proving it didn’t necessarily need an acknowledged addictive substance to maintain popularity. It’s an incredibly durable brand, then—but even Coke is vulnerable to a hit from the biggest star in soccer, Cristiano Ronaldo.

A $4 billion hit right in the corporate gonads (a.k.a. the stock market), according to USA Today:

Coca-Cola shares dropped from $56.17 to $55.22 after Ronaldo moved two Coke bottles out of view and picked up a bottle of water before Portugal’s match against Hungary on Monday. Market value for the company dropped from $242 billion to $238 billion – a $4 billion plunge.

Ronaldo’s gesture was surprisingly simple and one you’d expect from a top-tier athlete known in part for his ripped physique. He simply moved the soda, held up a bottle of water then forcefully said, “Agua!” — Portuguese for “water.”

Still, the company’s response to a multimillionaire sports star dramatically disrespecting its flagship product was admirably measured. Coke reportedly issued a statement in which they said, “everyone is entitled to their drink preferences” and acknowledged that we all have different “tastes and needs.”

Ronaldo has never been hesitant to share his approach to fitness and he’s dead serious about it. Insider reported in November 2020 that he “eats 6 meals and takes 5 90-minute naps a day.”

Coca-Cola is too big to really suffer from even a $4 billion blow like this, but it’s safe to say we won’t ever see Cristiano Ronaldo participate in a cult-like singalong such as the one seen in Coke’s most famous commercial above.

Ronaldo’s son, however, is another story, as the soccer megastar has admitted in interviews that he fights with Cristiano Jr. over drinking it.

If Coca-Cola is smart, they’ll see if the younger Ronaldo might want a gig as a spokesperson.