Celebrate the award-winning bar’s victory with their excellent Negroni recipe. 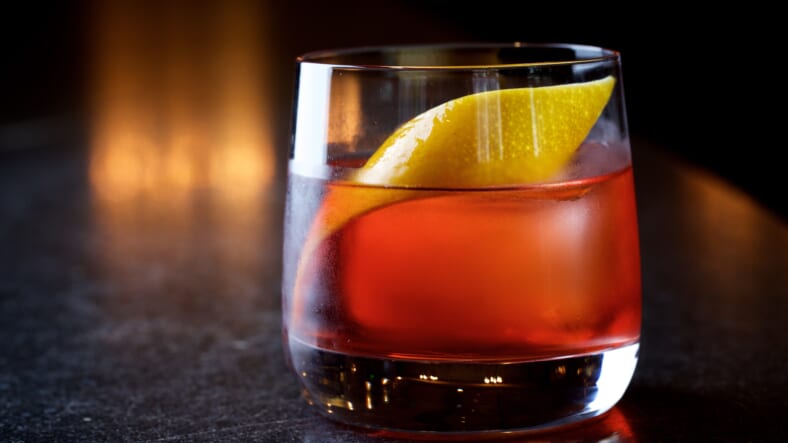 Maxim.com was way ahead of the cocktail curve when we highlighted New York City’s Dante and the bar’s “Ultimate Negroni” back in 2017: The 2019 Spirited Awards named Dante “World’s Best Bar” at a ceremony in New Orleans on Saturday, as part of the annual Tales of the Cocktail conference.

It only seems natural that the newly-tapped “best bar on the planet” would mix up the ultimate version of that time-honored Italian apertif known as the Negroni.

Dante, located in Manhattan’s West Village, also snagged Best American Restaurant Bar for the second time since it opened in 2015. There’s a drawback to dominance in that category—Spirited Awards rules mean it can never win that particular honor again.

In accepting the award, Dante creative director Naren Young thanked patrons and said that for anyone planning a visit, they “look forward to welcoming you.”

The ceremony itself had an interesting Breaking Bad connection. Bryan “Walter White” Cranston, who recently launched Dos Hombres mezcal (to considerable fan consternation) with his former Bad costar Aaron Paul, gave some opening remarks in which he joked about how people said he and Paul should call their booze line “Methcal.”

Which honestly, they should.

Atlas, based in Singapore, also cleaned up with Best International Cocktail Bar and Best Spirits Selection.

But what about Dante and that killer Negroni? We can’t close without once again giving you the recipe.

Pour ingredients in a mixing glass and stir with ice for 20 seconds to dilute. Strain into rocks glass over ice—ideally, a large ice cube—then garnish with orange wedge.

As Naren Young told Maxim in 2017, Dante uses “a touch more gin” in their Negroni because “the classic formula is too sweet and doesn’t make for a balanced drink.” Young also noted it’s a little less alcohol-heavy overall, clocking in at 2.5 oz. pour, which allows for “more leisurely summer day drinking.”