New Orleans chef Tenney Flynn is diving into “The Deep End of Flavor” with a fish-centric new cookbook. 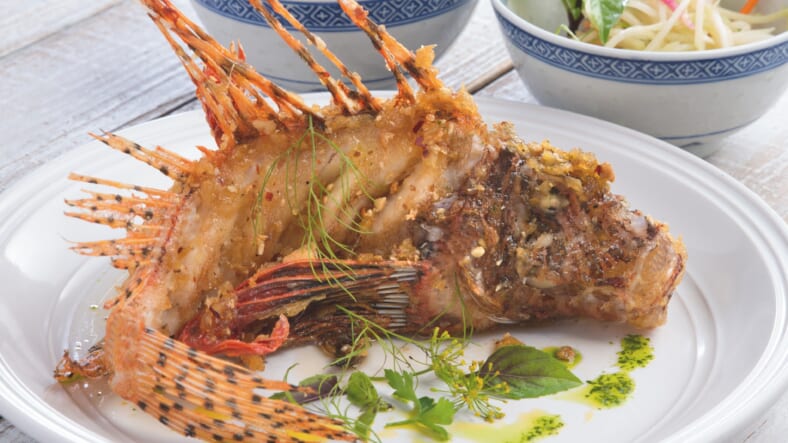 Don’t talk about tilapia to Tenney Flynn, the chef of acclaimed French Quarter restaurant GW Fins, and now, the author of The Deep End of Flavor: Recipes and Stories from New Orleans’ Premier Seafood Chef. On a scale, as it were, of 1 to 10, he’d give tilapia a Zero Stars rating for its benign flavor, farm-raised and frozen, wildly popular in its Middle America ubiquity but saltwater-anemic. Of the freshwater filet, he says, “There’s always something better in the case or freezer.”

Cases in point: any of the fish that land on his nightly chalkboard menu (sometimes as many as 20 of them), featuring sea creatures and shellfish that actually appear and taste like they came out of the ocean, swamp, river, lake, or stream. “We literally don’t know what will be on the finished menu until four in the afternoon,” says Flynn.

A spear fisherman who came up in his father’s Southern-cooking family restaurant kitchen in Stone Mountain, Georgia, says, “Nobody has ever sent a steak back for being too ‘steaky.’” But a common concern of customers, he says, is that a fish may taste too, well, like a fish. Despite being located in one of the more touristy areas of the French Quarter, his restaurant does not cater to the bland of palate, raising the stakes to the adventurous.

For the sly-witted Flynn, who can be intimidating for his stoic comport, flavor comes first, but as James Beard Award-winning New Orleans chef Susan Spicer (Bayona) says of her pal, “Tenney highlights the importance of sustainable, underutilized, and invasive species.” …And just plain weird shit that happens to be delicious. Have you ever looked a flounder in the eyes? Brushed a mussel-shell-chomping sheepshead’s disturbingly human-looking teeth? Stared down a lionfish, a delicious monster that is as invasive as walking catfish?

Yet what makes Flynn’s cookbook stand out is that it is fascinatingly instructive, anti-intimidating. There isn’t a single recipe that you couldn’t make at home. (Find ye a local fish-monger.) Boasting two of the most formidable indexes and glossaries of finfish (69 descriptions in all) this reporter has ever laid eyes upon, The Deep End of Flavor is broken down into categories such as raw, sautéed, blackened, grilled, smoked, fried, simmered, stewed, along with separate categories for sauces and dressings, grains, sides, salads, and desserts.

As he is in fact a decades-long New Orleanian, of course there will be cocktail recipes too (hit a Fingroni or a Lundi Gras Punch), as well as how to pull off a big crawfish boil, or make crowd pleasers, such as smoked fish dip or jambalaya. And Flynn shares his arsenal of back-of-the house needs in a section entitled “Welcome to My Kitchen,” with discerning picks of the best thermometers, mixing bowls, spatulas, and skillets.

Though the book is co-authored by local foodie Susan Puckett, you can hear Tenney’s voice in the instructions. As the chef is un-fond of waste, one of the many did-you-know-idiosyncratic sidebars (breading, a butter sauce primer, how to roast peppers, how to roast whole fish) includes “heads, collars, and other fish parts unknown.”

“I have Asian friends who can’t believe that collars and heads aren’t held in higher esteem in the United States,” writes Flynn. “They would much rather eat them than a boneless filet.” Along with his executive chef Michael Nelson, Flynn serves what GW Fins calls “fish wings: you hold them by the fin and eat them like a chicken wing.”

GW Fins hot-smokes the part of swordfish that is striated like small ribs where the dorsal fin attaches to the body; it’s served with a smoked jalapeno butter. Fish heads are a given to Flynn for making fish stock.

For your own kitchen, he writes, “clean them well and give them a quick soak in salt water first.” Surely you wonder what a “collar” is? It is the clavicle of a fish. Flynn grills, hot-smokes, and roasts the collars of big fish like cobia and sword. “They taste like the best barbecue you’ve ever had.”

As for cheek meat, it is sumptuous because “the texture is a little firmer than the meat from the middle of the filet.”

More conventional, but no less delectable recipes from The Deep End you can make at home include: