Elon Musk Is Getting Into the Booze Business, Trademarks ‘Teslaquila’

Not meant for drinking while driving a Tesla. 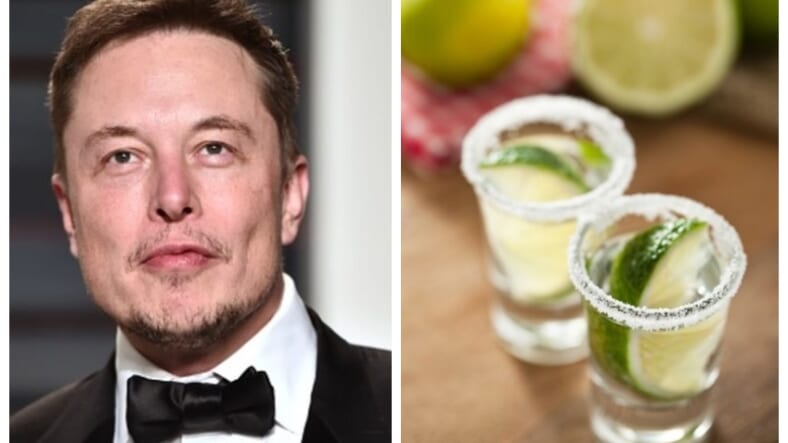 It looks like $20 million fines from the SEC and a demotion from Tesla chairman to CEO haven’t had had much effect on weed-smoking billionaire wild man Elon Musk. He may be branching out into the liquor biz with a trademark for his own “Teslaquila.”

That’s just what it sounds like: tequila—or as the patent says, “distilled agave liquor”—with the Tesla logo slapped on the bottle. See above.

If true, this means die-hard Tesla customers could one day get drunk as hell on Teslaquila then speed down the Interstate in a self-driving Tesla roadster torching other cars with a Tesla flamethrower.

The guy who incurred those serious SEC penalties after making lame 420 weed jokes about Tesla stock prices probably has this exact scenario in mind.

Here are more details from CNBC:

Teslaquila first appeared as part of an April Fool’s prank in which Musk said on Twitter that his electric car company was going bankrupt and that he had been found “passed out against a Tesla Model 3, surrounded by ‘Teslaquila’ bottles.”A few days later, he posted a photo on Instagram of a tequila bottle with a Teslaquila label plastered on it.Representatives for Tesla did not immediately respond to CNBC’s request for comment.

Those company reps were probably too busy sighing and phoning co-workers saying, “yeah, he’s at it again.”

Elon was found passed out against a Tesla Model 3, surrounded by "Teslaquilla" bottles, the tracks of dried tears still visible on his cheeks.

This is not a forward-looking statement, because, obviously, what's the point?

Elon Musk has a history of making jokes into reality. He said he’d blast a Tesla into space. He did it. He made his own damn flamethrowers for fun, apparently. Then there’s the Boring Co., which he claims came about after he got annoyed with LA traffic and wished he could just bore a big tunnel to wherever he wanted to go.

For now, it’s just a trademark and an image on Twitter. Hell, Musk might have done all these things after a few shots of tequila.

If Teslaquila is real, though, Musk’s love for cannabis might mean a follow-up of cannabis-infused tequila. Hopefully.

Not to encourage him too much, but it’s worth pointing out that if he did create a 420-themed spirit after Teslaquila hit the market, he would definitely be in the running for the crown of “America’s Most Beloved Billionaire.”