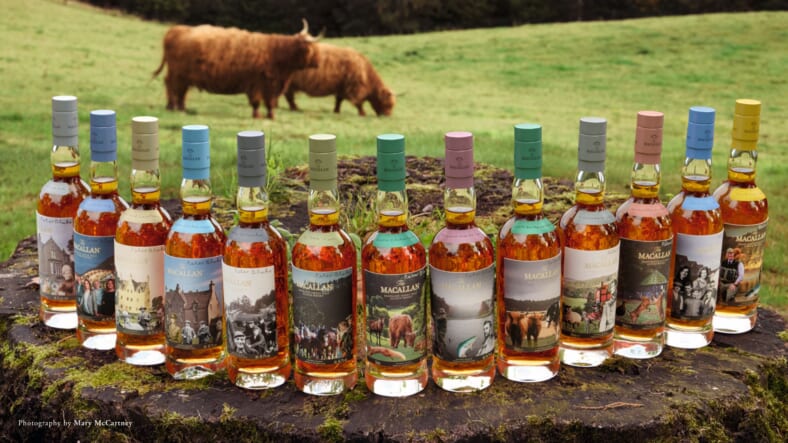 What do whisky and art have in common? Plenty, when you really sit back and think about it. Nuance, complexity, attention to detail, quality formulations and a deeper meaning: Artwork on your wall really isn’t just something pretty to look at, and the dram of whisky you’re enjoying is never just whisky. Perhaps that’s why The Macallan Anecdotes of Ages partnership with famed British pop artist Sir Peter Blake works so well.

If the name sounds familiar, that’s because Sir Peter helped co-create the iconic album sleeve for 1967’s Sgt. Pepper’s Lonely Hearts Club Band by, well, you assuredly know the band (The Beatles, for all those playing along at home). Blake’s decades-long legacy has helped put British pop art on the map. Blake also designed the Live-Aid poster and two album covers for The Who (among many other famed works).

It’s that history that makes him such a fitting partner to design 13 unique bottles housing The Macallan whisky, with each one featuring a Blake collage tied to The Macallan’s heritage and the natural beauty of The Macallan Estate. Each was designed with both art collectors and fans of The Macallan in mind, and each is striking in its own way.

Oh, and the whisky itself? An exceedingly rare 1967 blend with “classic yet distinctly colorful character” — naturally, the year of the whisky itself pays homage to Blake’s famed work and its place in pop culture. Caramelized peach characterizes the color of this stunning whisky, with aroma notes of antique oak, dried fruit and fig, plus palate notes of warm chocolate with light nutmeg and ginger (among others). We’ll raise a glass to that.

Blake worked closely with The Macallan Lead Distiller Sarah Burgess through the process, sharing his own experiences and inspiration as a guide for the distillery to follow.

The partnership even includes access to a virtual art exhibit, ideal for these socially distanced times.

Of the 13 bottles, one will be auctioned by Sotheby’s to benefit the Solomon R. Guggenheim Museum’s diversity, equity, access, and inclusion initiatives. Lucky bottle No. 13 will be kept in The Macallan’s archives, but the famed distillery is also releasing a special-edition version of the 1967 whisky to the general public, known as The Anecdotes of Ages Collection: Down to Work Limited Edition.

It’s available for a cool $83,000 SRP in a super-limited run of only 322 bottles (all featuring a digital replica of the same label from Blake).

The Macallan has a knack for engaging partners with broader ambitions beyond the scope of spirits, including its recent partnership with the Atlantic Salmon Trust to protect and conserve the River Spey in the distillery’s estate.

That’s not all: This new partnership also includes a separate, special-edition whisky (known as “An Estate, A Community and A Distillery”) available for purchase, featuring a custom box with artwork from Sir Peter Blake, plus a certificate and scroll outlining the heritage and history of the artwork and the whisky itself. This edition is priced at a more accessible and yet no less covetable $1,200.

If you want your next whisky experience to be truly memorable, it’s best to look beyond the expected and explore how art and whisky are more closely intertwined than you might think — who could argue with that?