This is the Most Expensive Wine Ever Sold

It smashed all previous records. 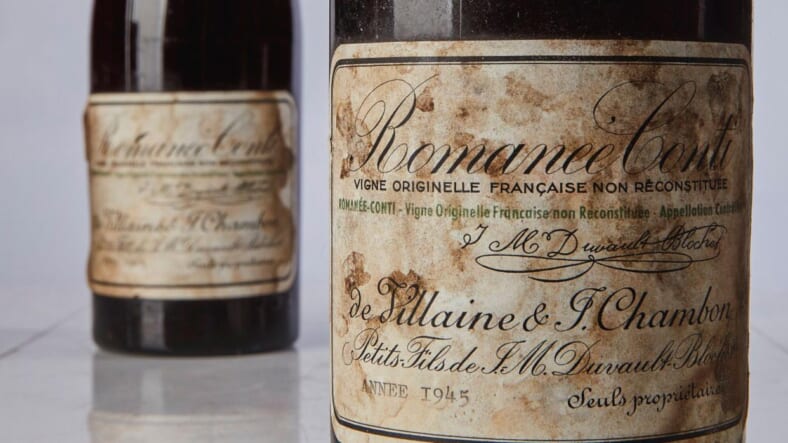 Ultra high-end whiskies have been getting all the glory lately. Collectors recently gobbled up the world’s most expensive whiskey bottle for $1.1 million (an extremely rare 1926 Macallan scotch) and the priciest Japanese whiskey, a $300,000 Yamakazi single malt.

But now the wine world has clapped back with the blockbuster sale of the five most expensive bottles ever sold.

The wine, a red Burgundy from Cote de Nuits, is insanely coveted because only 600 bottles were made in 1945, and the vines were removed and replanted after that vintage.

“Rare and wonderful,” Serena Sutcliffe, head of Sotheby’s international wine department, wrote on Sotheby’s auction site. “The best bottles are so concentrated and exotic, with seemingly everlasting power—a wine at peace with itself.”

A second super rare Romanee Conti bottle from the same year sold for $496,000, despite “scuffed, torn, and partially missing labels.” Three more bottles from the 1937 vintage sold for $310,000 each, even though they were estimated to sell for just $40,000.

Combined, all five bottles from the personal cellar of wine producer Robert Drouhin brought in $1.98 million. So yes, it was a very good day for the luxury wine market.