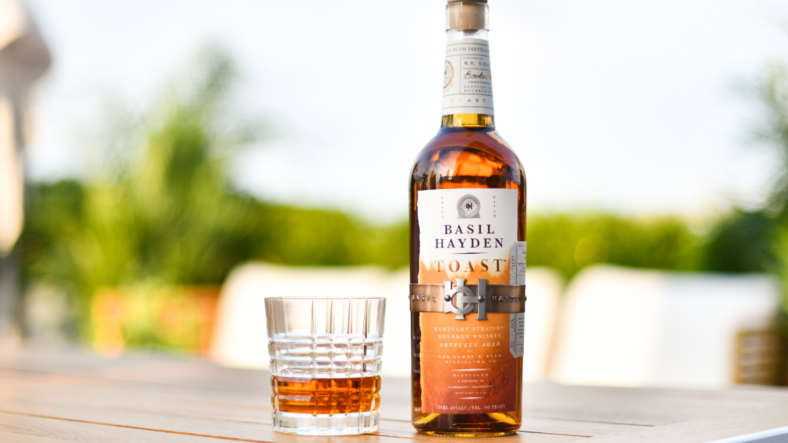 Basil Hayden‘s—one of the most popular “gateway” bourbons on the market—just dropped a new bottle that will make us all want to be novice drinkers again.

Basil Hayden Toast is a first: a new recipe replacing the Jim Beam distillery’s signature rye with brown rice, and finishing the whiskey in specially toasted barrels for added depth and flavor.

The folks at Beam tell us that the Basil Hayden Toast recipe is made with US-grown brown rice selected for this recipe to impart “a hint of sweetness and a touch less spice.”

Swapping out rye for brown rice cuts a significant portion of the well-known “rye spice” flavor that can be too aggressive for new drinkers. The toasted barrel finish replaces that spice with a deeper element of sweetness, with notes of caramelized sugar and toasted wood.

The toasted spirit is then married with some un-toasted brown rice bourbon from level four char barrels. The final product is complex and flavorful in a way Basil Hayden has never been before.

The Basil Hayden Toast bottle looks a little different than traditional Basil Hayden bottles. It’s the first release to get such an update but over time the look will be phased into the rest of the collection.

Credit for this—one of the most interesting bottle designs since Basil Hayden was created nearly 30 years ago—goes in part to eighth-generation master distiller Freddie Noe.

This marks Noe’s first official foray into Basil Hayden releases. He has previously produced limited-edition whiskeys under his annual blend-focused “Little Book” line as well as a delicious reimagining of Old Tub released in 2020.

According to Noe, “Basil Hayden Toast is truly a whiskey for fans of all taste and experience levels to share.”

“When my grandfather Booker Noe first made Basil Hayden,” Noe continued, “his intention was always to create bourbon that opened people’s minds to what bourbon can be. Inspired by his mission, I’ve spent many years working to produce a new bourbon that speaks to this sense of discovery,”

Noe has also been working with brown rice recipes for some time. Jim Beam first released a brown rice recipe under the Signature Craft line nearly a decade ago. After stepping into the whiskey-crafting role full-time, Noe has since used it in Little Book.

“The unexpected addition of brown rice,” he said in a statement, “as well as the toasted barrel finish of Basil Hayden Toast … delivers an intriguing avenue into the warm and memorable bourbon sipping occasion.”

Flavorwise, the toast and brown rice impart a depth of flavor that for the average bourbon consumer has been “missing” from a Basil Hayden bottle. To be clear: There’s nothing wrong with Basil Hayden, but its low proof point and higher filtration factor have made some previous special releases feel thin or structurally weak.

Not so with Basil Hayden Toast. The alcohol content is a brand-typical 80 proof, but full of flavor, all without diminishing that trademark “approachability.”

Given that this will be a permanent line extension, it should become (and remain) pretty easy to find. Look for it on Drizly or in your local liquor shop this month. At $50, we have no complaints about the price.

Clay Whittaker is a Contributing Editor at Maxim.com. His work has appeared in Playboy, Esquire, Forbes, Cigar Aficionado, Town and Country, and elsewhere. He publishes a newsletter called “Whiskey Beat” every Friday, collecting the most important whiskey writing of the week. Subscribe here.