Each rum-spiked sipper comes in a different kind of glassware. 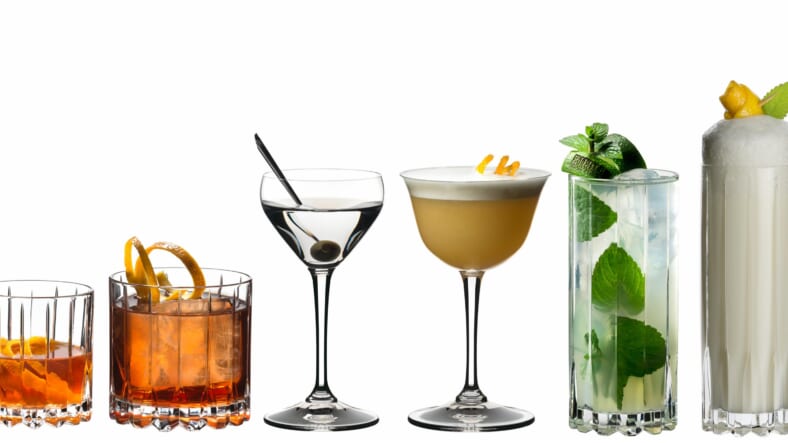 As you may have noticed we’ve recently been a little obsessed with all things rum, collecting and sharing some our favorite bottles from around the world. Now that you’ve found the best, it’s time to figure out what cocktails to make with Maxim’s exclusive recipes below. And just as importantly, precisely what to pour them into.

While connoisseurs spend hours carefully combing through specialty boutiques, bodega shelves and eBay auctions trying to source the perfect Rhum Agricole from Martinique, many don’t invest a second thought on what vessel they pour that priceless nectar into.

For shame, young philistine. Riedel — the 300-year-old, Austrian family-owned firm known for their Sommeliers Series of wine and champagne glasses, while more recently designing the official tequila coupe — have collaborated with mixologist Zane Harris to craft six cocktail-specific glasses. Their Neat, Rocks, Highball, Nick & Nora, Sour and Fizz glasses together are designed to carry over 3,000 potions.

Given his obsession with ice it’s no surprise the frozen element played a huge role in how Harris designed his glassware: each vessel’s size, shape and volume was decided specifically by its capacity to carry ice.

The Highball is envisioned to hold a tower of cubes (e.g. Peasant, Julep or Mojito), the Rocks large blocks (e.g. Old Fashioned), the Neat no ice at all, while the Fizz maximizes a frothy head of foam (e.g. Gin Fizz). For the pair of stem glasses think Nick & Nora for martinis and Manhattans and the Sour for Daiquiris.

“Rum must be truly discovered to be appreciated for more than a sweet additive to Piña Coladas — and most of these discoveries come from the cocktail world,” he explains of rum’s recent rise in finer bars worldwide.

“As bartenders and mixologists look for new and exciting ingredients, it’s inevitable that rum, with its many varieties, would become a staple in the craft bar scene.”

Given its provenance is spread across the planet (basically anywhere sugarcane is grown, and far beyond), what we call “Rum” is one of the largest and most varied categories in the spirits world.

“There is a surprisingly vast difference in flavor profile and characteristics,” Zane continues. “Simply put, Rum is the most versatile spirit in a bartender’s arsenal.” He urges home bartenders to experiment, substituting unaged white rums in place of vodkas, gins or tequilas, and aged bottles as an alternative to whisk(e)y and cognac.

“Dark rum,” he points out, “with molasses added back to the final distillate, is an addition that creates unique concoctions that most people have never experienced.”

The category can be broken down into three styles: Rum, Rhum and Ron. In Harris’ words:

Rum, or English style, is made from fermenting and distilling molasses left over from sugar production. From here things get fragmented based on where the Rum comes from. English style currently dominates the market and is considered to be cleaner in taste.

This style is also referred to as Rum Industrial or Industrial Rum. Many rums made in this style are produced in Jamaica, Barbados, Trinidad & Tobego, The Virgin Islands, Antigua, and St. Lucia.

This means the production is less processed and the resulting Rhum is more vegetal, green and earthy. Rhum is famously produced in Martinique, Guadeloupe, and Haiti. Cachaca, a cane spirit made in Brazil, is very similar to Rhum Agricole.

Spanish style Rum, or Ron, is made similarly to the English style Rum, but tends to be lighter in body and flavor. Cuba, The Dominican Republic, Guatemala, Puerto Rico, Venezuela, Nicaragua and Panama are some of the countries producing Ron.

With rum on the mind, Zane graciously concocted a cocktail for each of his glasses exclusively for Maxim below. Pick up a set of 2 of Riedel’s Drink Specific Glassware Collection for $29.90 here.

Dry shake without ice. Add ice and shake again. Strain into chilled Sour glass. Garnish with a dash of Angostura bitters over the top.