These Insane Churro Cannabis Cookies Could Be Your Favorite New Edible 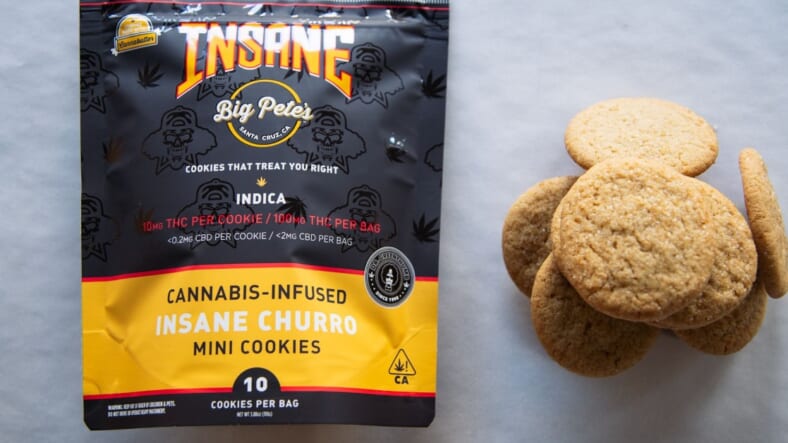 The world of edibles has come a long damn way just in the last few years. Those ashy pot brownies your friend’s weird roommate would never pass muster in the post-Bong Appetit world we inhabit now. But for all the developments in extraction techniques and flavor enhancement, it seems like everybody’s focused on gummy candy, and nobody is really nailing the snack food edible.

Enter Big Pete’s Insane Churro Cookies from cannabis brand Insane. That’s the company owned by weed-loving Cypress Hill rapper B-Real, who also operates the Dr. Greenthumb’s dispensary chain. These Insane Churro Cookies are 10 mg heavy indica snackables that have earned a treasured space on the top shelf of our panty—and deserve a similar spot in yours.

First thing’s first: they’re just tasty. Ashy flavors are nonexistent here, and though they’re herb-forward aromatically, once you’ve popped one in your mouth it’s a snickerdoodle-like cinnamon sugar blast with just the right yeasty consistency to replicate that churro flavor and texture.

And really, they’re an excellent balance of textures for any cookie. They were chewy, with just a few crunchy edges. It was a full spectrum cookie experience alongside the full spectrum cannabis experiences.

Rarely do you have to stop yourself from indulging on edibles for the flavor. With Big Pete’s cookies, you’re going to need graduate level work in self-control. The experience, meanwhile, was pleasant. For us, the initial wave started cresting around the hour mark—a mellow, after dinner high that left room for laser focus on a good movie, and not much else.

As occasional paranoia sufferers, it was a treat to find an edible that neither put us to sleep, nor had us checking the front door lock a dozen times. The telltale couch-sinking of a typical indica strain did show up to the party, but it felt less like a compulsion, and more like a reward after folding some laundry.

As much as a trip to outer space can be fun, dessert snacks like this are best designed as nightcaps. It’s good to see a product so well crafted also have a little bit of restraint on the “trip” experience; the worst thing in the world is finding an edible you like the taste of that yeets you into waking sleep paralysis for three hours.

Perhaps the one wrinkle in this weighted blanket of an edible was that, after the larger cookies had been consumed, there were two or three cookies worth of broken bits and pieces, which had settled to the bottom of the bag as a crumb pile.

We are big believers in the idea of making lemonade out of lemons though, and immediately it became clear that crumbled weed cookies had one inarguably divine purpose: to be poured over ice cream as a topping.

If you’re not much of a cookie fan, you may want to simply skip to this step. Just measure cautiously, or be prepared to struggle to sit upright.

For $22, Big Pete’s Insane Churro Cookies are definitely a re-buy product—we can promise we’ll be picking them up again.

Clay Whittaker is a Contributing Editor at Maxim.com. His work has appeared with Playboy, Esquire, Forbes, Cigar Aficionado, Town & Country, and elsewhere. He publishes a newsletter called “Whiskey Beat” that captures the most important whiskey news and trends every Friday. Subscribe here.