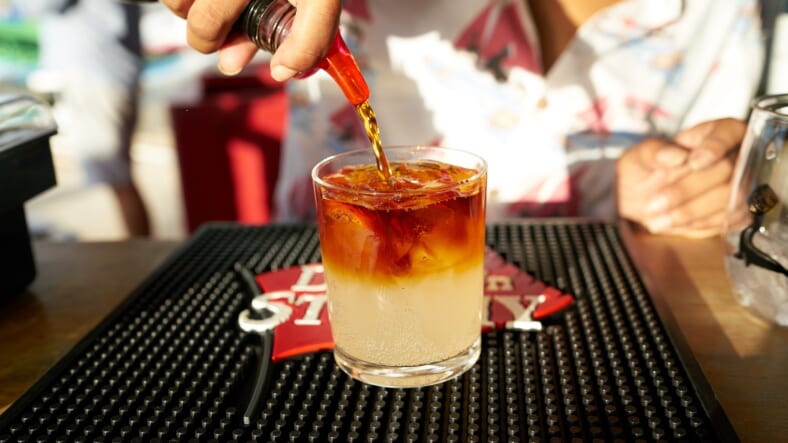 If you have the stones to advertise a cocktail made with with non-Goslings rum as a Dark ‘n Stormy at your bar or restaurant, you just might get sued. The rum brand has been called “litigious” for aggressively protecting the Dark ‘n Stormy name, and they’re not shy about taking on those who mess with their trademark.

Malcolm Gosling Jr whose family has owned Gosling’s since its founding in Bermuda in 1806, says it’s all about guarding the sanctity of the drink.

“The reason why we trademarked it,” Gosling told Maxim inside the Dark ‘N Stormy Suite at Boston’s Fenway Park last week, “is not to say that other rums don’t taste good with ginger beer, it’s just that nothing tastes like that. Nothing tastes like a real Dark ‘n Stormy.”

Stories of the Dark ’n Stormy’s history sometimes change in the telling. The most plausible begins, unsurprisingly, on a dark and stormy night. It was just after World War I and British sailors on Bermuda and exhausted from battle brewed their own ginger beer. Someone figured it would go well with Gosling’s signature Black Seal rum, and they were right.

Another tale is of a drunken old sailor who got mad because he was cut off, tricked with a glass of ginger beer. He demanded rum, so the barkeep poured some Black Seal on top of the beer, where it clouded the surface. The sailor stared into the glass and said it looked like storm clouds over the ocean.

Whatever the truth of its origins, Goslings wants drinkers to recreate the experience of a true Bermudan Dark ‘n Stormy no matter where they go.

To that end they launched a line of canned Dark ‘n Stormys in 2012, and it secures that brand protection—and probably takes some pressure off bartenders. Still, as perfectly balanced as the canned cocktail may be, a skilled bartender can turn out such a finely-tuned Dark ‘n Stormy—proportions between rum and ginger beer calculated to dizzying perfection—you could finish five before you know it.

One country, however, is a thorn in Goslings’ side: Australia, where another distiller first trademarked the name.

“Australia gives us a lot of trouble,” Malcolm Gosling says, “It’s the only place in the world where you can call it a Dark ‘n Stormy with another rum.” He jokes about it a little then indicates he isn’t too worried, saying their “distributor team in Australia is doing an amazing job despite the fact that we don’t hold the trademark.”

Sounds like the word-of-mouth down under about the real Dark ‘n Stormy is good—understandably so.

The sign on the door to Goslings Dark ‘n Stormy boardroom at Fenway asks, “You sure you want to discuss business in here?”

You don’t. Once you’re there, Dark ‘n Stormy in hand, you may just want to hang out and watch the game (Gosling’s is, after all, the official rum of the Red Sox) and the sun going down behind the Green Monster.

To make your own Dark ‘n Stormy, just make sure you’re using Black Seal rum and the proper ginger beer. Unless you want to call it something else, of course.

Check out this Gosling-approved recipe:

Top it off with a lime wedge—but only if you want to.