This crystal-clear premium tequila is capturing the hearts of agave lovers. 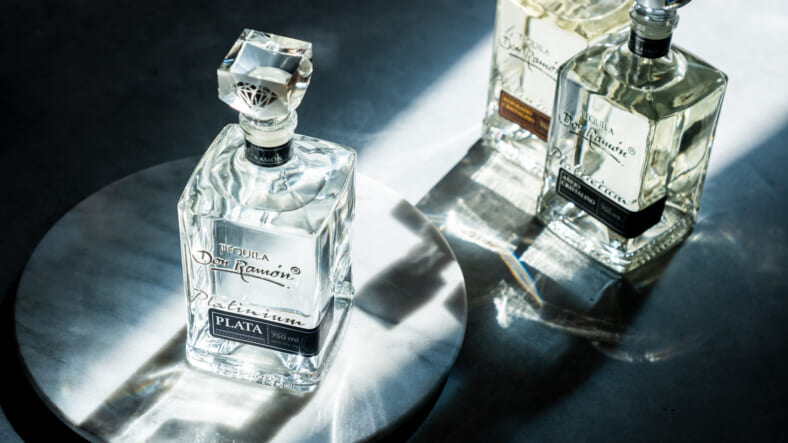 A decade ago, mezcal swept the nation—bartenders clamored to get their hands on single village bottles from Del Maguey while spirits lovers proudly dubbed the Oaxacan Old Fashioned their drink of choice.

Now, the Cristalino tequila category is positioning itself to be the agave scene’s newest hit. But what is Cristalino?

“Cristalino tequila is an añejo tequila that has been filtered to remove both the color and congeners and impurities,” says noted sommelier Richard Betts, the founder of Sombra Mezcal, Astral Tequila, and the just-launched ultra-premium tequila brand Komos.

“This process typically happens by filtering the liquid through activated charcoal, after it was aged in barrels. This removes some of the tequila’s woodier notes but leaves the flavors and textures imparted by the barrel intact.”

With Cristalino, “The tequilas are blended and filtered through a refinement process to smooth out any harsh notes while still maintaining the characteristics of aging in taste and aroma, giving a crystal-clear appearance to the liquid,” describes Maestro Dobel’s Maestro Tequilero Alex Coronado. Think the richness of an aged tequila, with the crystal-clear color of a blanco.

Coronado and his team brought this method of filtering to the tequila scene in the early aughts with the release of Dobel Diamante. Since then, a slate of new brands has joined the Cristalino ranks, with over a dozen launching in the last six months. This growth falls in step with the tequila category’s incredible growth over the pandemic—the tequila category expanded 46% in the last year.

But the category still has growing to do. “It’s important to note that all Cristalinos are not equal; they are made in diverse ways,” Betts explains. “Cristalino is not currently established as an official class or category by the Consejo Regulador del Tequila (CRT), the government entity in charge of regulations around tequila in Mexico.

However, for producers to call their tequila Cristalino, they have to demonstrate that the liquid was aged in oak barrels and explain the process used to remove the color and congeners after maturation. I prefer to think about Cristalino as an Añejo Claro—an añejo that is gently clarified.”

Because of the category’s unregulated nature, hardcore agave purists tend to roll their eyes at the category, pointing out brands can use everything from diffusers to artificial sweeteners to make the spirit.

“All Cristalinos are not created equally,” Betts continues. “First of all, how the tequila is made matters a ton. Was it made traditionally or was it made using a cheap diffuser? Second, all Cristalinos have to carry the age of the tequila too. There will be great differences between a reposado Cristalino and an añejo Cristalino so it’s important to know what you’re paying for.”

What are the must-have bottles of the Cristalino movement? Here’s some  top-shelf favorites:

The ultra-aged expression, a new permanent addition to the brand’s range, starts with 100% Blue Weber agave grown on the family’s estate in Jalisco. Dobel then selected a series of extra añejo tequilas from the family reserve (rested in new Eastern European and American oak barrels for at least three years). The selected barrels are blended together then filtered via a proprietary Cristalino method, giving the spirit a sparkling, transparent appearance completely unusual for a tequila with an age statement of this length.

Dobel can be credited with founding the category back in 2009. “It was in Mexico that Juan Dobel recognized a new generation of tequila drinkers who were increasingly drawn to silver tequilas (not aged), considering them more approachable and sophisticated than the more traditional reposados or añejos favored by the older tequila connoisseurs,” describes Coronado. “We knew the tequilas would need to be aged in a barrel for long enough to properly absorb the full flavors and notes before carefully filtering to smooth out the flavor notes—and appeal to these consumers reaching for a silver” $159

Betts’ Komos is one of the newest and most unique Cristalinos to grace shelves. Agave is sourced from hills outside Jalisco, roasted, and fermented with indigenous yeasts then double distilled. The resulting spirit then sits in French oak white wine barrels for a year before its dripped through a charcoal column and stored in amphorae—traditionally used in ancient Georgian and Roman styles of winemaking. After the aging process, the tequila is bottled not in glass but elegant hand-made porcelain bottles.

It’s one of the most complex and nuanced Cristalinos available, with a fresh nose and a vibrant salinity. “Because of its delicate, light and smooth taste, it is best enjoyed chilled or with a dash of sparkling water,” says Betts. $125

If you want to fully commit to Cristalino, Padre Azul makes a fantastic (albeit pricey) iteration.

Due to the elaborate nature of the bottle, only 1,000 bottles were ever made—it’s topped with a pure Swarovski crystal skull-shaped stopper. The exterior is designed in collaboration with Prison Art, a Mexican design house that helps reintegrate prisoners into society via creative outlets.

Design aside, Master Distiller Erika Sangeado ages liquid for 18 months before filtering through charcoal just once so the age shines through. Consider this a bar cart flex. $999

Don Ramon has just added two new Cristalinos to their line-up—the first-ever Cristalinos by the beloved brand. A reposado, rested in both American and French oak. The second is a more elderly añejo, double-distilled and left to rest in American oak for a full year.

Considering neither bottle tops $50, it’s perfect for a first foray into the Cristalino category. The añejo has notes of spice, plus vanilla and wood from the new oak age. The reposado has a slight straw tint, with soft notes of custard and a slightly herbaceous finish—smooth, uncomplicated, elegant. $44

Dahlia is the brainchild of the folks from Mezcal Silencio—their first new product release in over eight years. Made in Tequila Valley and aged for six months in new American oak, it’s less heavy on the big vanilla flavors, leaning instead on a bright bouquet of florals with top notes of fennel and vanilla bean pod. It’s surprisingly affordable and plays particularly well in cocktails, plus, it sits pretty on a home bar with a decanter-inspired bottle. $34.99

Tequila Partida recently launched a line of sherry-accented tequilas, including a sherry-aged reposado Cristalino. Partida’s Maestro Tequilero, José Valdez took a trip to Scotland when making the line, drawing inspiration from the country’s signature single malts. His resulting Cristalino sits for six months in ex-bourbon barrels for those vanilla and charred oak notes, then continued aging in ex-single malt sherry-seasoned casks from Scotland. $120