“Pounds are coming off. My strength is going up. I’m getting as strong as a horse over here.” 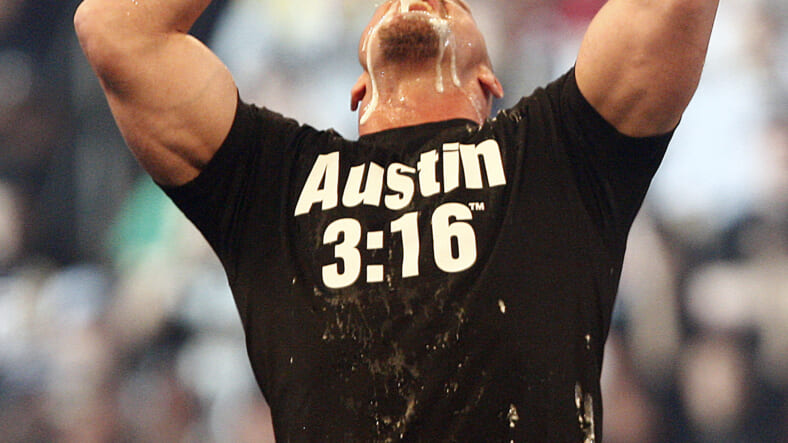 WWE icon “Stone Cold” Steve Austin is famous for guzzling beer in the ring, but for the sake of his health, he’s gone stone cold sober.

In his podcast The Steve Austin Show, the wrestler opened up about his decision to put the beer down and embrace a healthier lifestyle that doesn’t involve smashing two beer cans together and shotgunning the frothy elixir during his blockbuster WWE career.

“My eating program is going fantastic,” the 53-year-old explained. “[I’m] sticking to my exact macros. [I’ve had] zero alcohol for right at 14 days now.

“No alcohol, and when you hit the weights on a consistent basis and eat what you’re supposed to, it is amazing the difference that you can make or I’m making.

“Pounds are coming off. My strength is going up… I’m getting as strong as a horse over here,” he added.

Obviously, excessive alcohol consumption isn’t the best thing for the human body, and and when you stop drinking alcohol, your body perks right up. Even science says so.

According to a study published in the scientific journal The Lancet, there’s a “clear and convincing correlations between drinking and premature death, cancer, and cardiovascular problems.” And not to mention weight problems, considering there’s so many calories in alcoholic beverages.

However, I would also like to mention that other studies have found contradicting evidence that drinking is actually healthy, so I’m going to go ahead and believe that it is, because drinking beer is fun as hell.

Austin is also taking up a new hobby: Yoga. “I’m also doing my DDP Yoga shit. Hell, I’m going to jump up here and do the splits like a god-dang cheerleader in a minute!

“I’m flexible as a motherfucker. Dallas’ program works like a bitch,” he eloquently elaborated about the DDP Yoga program created by “Diamond” Dallas Page.

Austin also says he’s been trying out marijuana to take the edge off, too. Yay, weed!

However, he explains how, on a camping trip with his wife, he almost got busted at an inspection point for having a joint on him thanks to some police dogs.

Those dogs are smelling tires, and trunks, and license plates, and all kinds of stuff. And I’m sitting there thinking, ‘Boy, I’ve got that white-knuckle fever going on my damn steering wheel.

And I’m thinking, ‘Man, here I am, retired from the [pro] wrestling business, a global icon and a national treasure, and I’m about to get busted for fucking one joint because I wanted to try out a goddamn marijuana cigarette so I could get away from the booze!’

We go through there, the dude looks at me and I look at him…I’ve been passing through my whole damn life and they knew who we are and we always say ‘hi’ to them.

This was a fucking medical joint, smaller than a pencil. It probably weighed about two grams. I’m figuring, ‘Oh shit, man.’

That would be a misdemeanor, but it’d be on my fucking record and the last thing I want to do after all the bullshit I survived in the business of pro wrestling, was to get busted for goddamn possession of a fucking controlled substance.

But the story has a happy ending, obviously. “They waved us through.”