Everything You Need to Know About Apple’s New iMacs, iPad Pros, AirTag and 4K TV 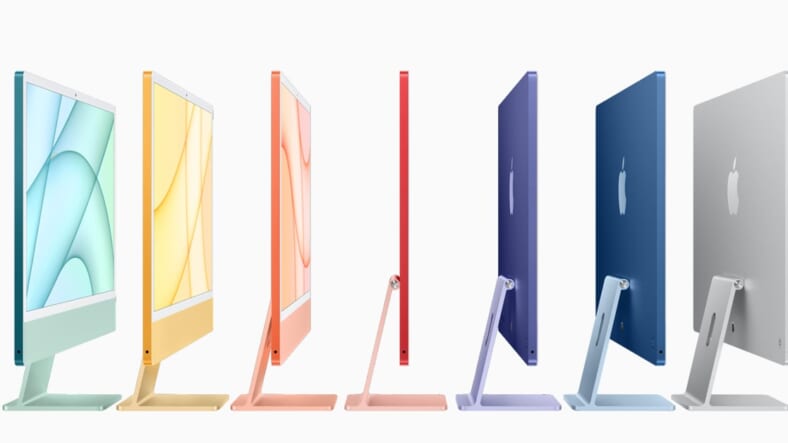 Apple took to the stage for the first time in 2021 with their “Spring Loaded” event to show off brand new models for their iMac, iPad Pro, AppleTV and long-awaited Apple AirTag. Here’s everything you need to know about the latest product drops from the tech powerhouse.

The entirely redesigned iMac was the biggest reveal today. Sporting the vaunted Apple Silicon M1 system-on-a-chip, the colorful lineup is as powerful as it is good-looking. Super-slim and simplified in a way that only Apple seems able to accomplish, the new iMacs have a 24” 4.5k retina display in an impossibly thin form factor.

Seven colors and a ton of technical configurations for specs will be available. The entirely-Apple ecosystem offers a huge load of benefits in terms of productivity, creativity and overall speed. These benefits were first noticeable when the MacBooks were upgraded to M1 last year and those same benefits will now be available on Apple’s premiere desktop. The new iMac base models (with limited colors) starts at $1,299 and the beefier-optioned versions start at $1,499 with pre-orders opening on April 30th. These new desktop Macs will make it to customers in the second half of May.

Just like the new iMac, the newly announced update to the iPad Pro line also gets the M1 Apple Silicon treatment for huge performance gains across the board. Even over last year’s impressive iPad Air 4th-gen, the new iPad Pro will be an industry leading tablet with impressive horsepower for pro users.

There’s also been an upgrade to the camera array that adds an ultra-wide camera and Apple has bumped the display of the 12.9” to a Liquid Retina XDR, similar to the tech found in Apple’s insanely expensive professional performance monitors. Now available in an enormous 2 terabyte flavor with updated hardware connectivity and optional 5G cellular support, the new iPad Pros will come in 11” and 12.9” sizes, starting at $799 and $1,099 respectively. Pre-orders begin on April 30th and these will hit the streets in the second half of May.

The all-new, long-rumored Apple AirTags were finally announced. Standing by their commitment to privacy while also remaining supremely helpful, Apple’s AirTags will leverage the same encryption used in their Find My app. AirTags can be personalized for whatever device they’re attached to and uses the Apple U1 chip to communicate with Apple iPhones to help you find them using alerts and audio cues. $29 for one, $99 for four, pre-orders start Friday, April 23rd and hit stores on April 30th.

Packing the A12 Bionic chip to bring a major upgrade to consuming content, the new AppleTV 4K should chew up and spit out HDR and high-framerate video, whether that’s coming directly from Apple’s servers, an iPhone 12 Pro or even via AirPlay from other Apple devices. Smart functions in the new AppleTV 4K will result in better calibrations that are easier to do.

There’s also a new Siri Remote; the first upgrade to the ultra-simple remote that’s been a staple of the AppleTV ecosystem from the beginning that will reintroduce Apple’s jog-wheel from the iPod days and, finally, a power button that’ll give more complete control of the TV too, not just the AppleTV itself. The new AppleTV 4K will start at $179 with 32GB or $199 for 64GB. Pre-order April 30th, available in the second half of May.