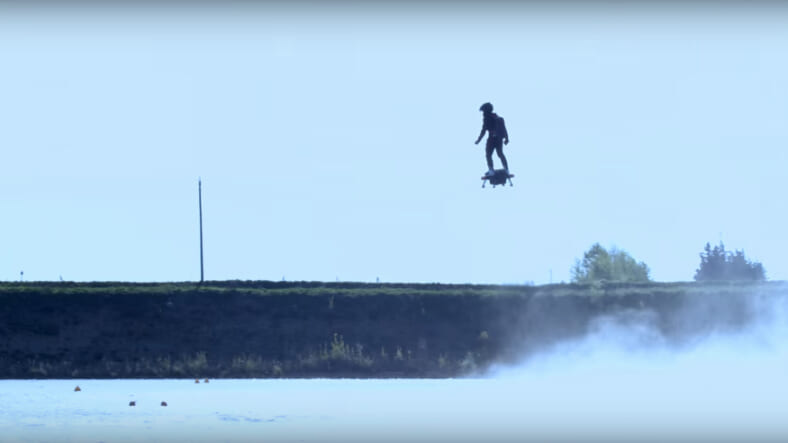 For the average layperson, rolling along on a gyroscopic two-wheeler without bursting into flames is daring enough. Others are happy to magnetically hover in a confined space over special flooring, or perhaps even float down a runway. But that’s where we draw the line between stuff that looks amusingly intriguing and shit-your-pants fun.Joining the likes of jetpacker David Mayman and Dubai skystreaker Yves Rossy, thrillseeker Franky Zapata recently soared through the sky at an average speed of 34 miles per hour for about four minutes. Unlike his original Flyboard—a tethered, water-based jetpack that works in conjunction with a boat or jet ski—Zapata’s new Flyboard Air invention is completely unattached and independent.

Supposedly this crazy airborne platform can reach an altitude of 10,000 feet and speeds up to 93 miles an hour during 10 minutes of autonomous flight. Of course, it hasn’t yet been proven either that it can or why a person would need to do so. But that same desire to press the limits of speed and human endurance has pushed folks to do stuff at least equally as reckless.

In the meantime, as Zapata Racing continues to modify their highly provocative, jet-fueled aeronautic adventures throughout the rest of 2016, you just go ahead and enjoy moseying from the couch to the can on your little rollerboard thingy.