These Badass Fire Pits Bring Characters From ‘Star Wars’, ‘Predator’ and ‘Jaws’ to Your Backyard

You won’t find these at Home Depot. 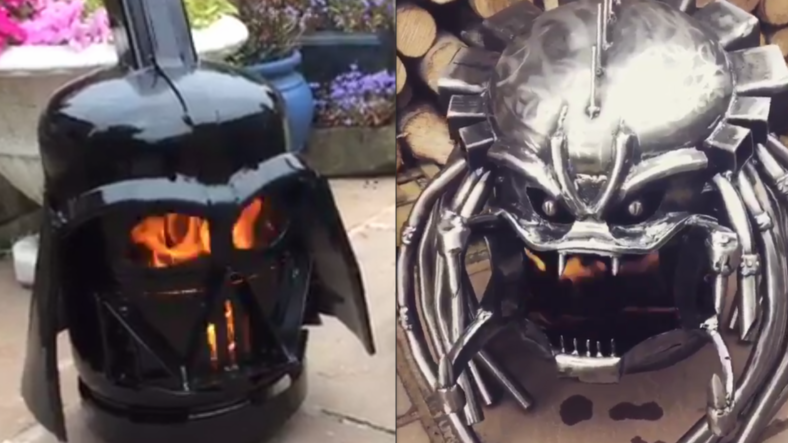 The run-of-the-mill fire pits found out your local home-improvement store will warm up your patio on a cool autumn night, but these metal movie-themed burners will do the same while looking totally awesome.

Based in Barnsley, England, Burned by Design reincarnates some of the most wicked characters in movie history as hand-crafted gas and wood burning fire pits.

Alex Dodson, a former full-time technology teacher and self-taught welder, has made hundreds since he began the business three years ago.

Speaking to HomeCrux, he revealed the idea came to him after a completing the painstaking process of learning to build a stove, during which he says he “set fire to my parent’s garage a few times.”

“The stove worked well. I sat and watched the flames in the belly of the burner when the idea of making a burner in the shape of Darth Vader’s head popped into my head. I was hooked and off I went to work on my next stove.”

Incredibly, Dodson doesn’t use templates, which means that each fire pit is truly one of a kind.

Ranging in price $360 to $1430, all of his designs are available on the company’s website. Check out some of the most awe-inspiring pieces below:

I caught my sister adding the finishing touches to our R2 and it instantly reminded me of this scene in episode 4 @StarWarsArt @RebelNews pic.twitter.com/EAi1itwtHO

This monster 800mm Death Star burner is off to the capital 'as if millions of voices suddenly cried out in terror'#coolwoodburner #handmade pic.twitter.com/mePA7Gfn3z

The Predator from Predator

Freddy Krueger from A Nightmare on Elm Street

The Batman Burner, this 1 will be at our show stand at the NEC Comic Con on the 3rd and 4th of June#coolwoodburner #batman #comiccon pic.twitter.com/8rFJi3xMPa

Witch King of Angmar from Lord of the Rings

'Do you not know death when you see it, old man?'
Today's project, the Witch King of Angmar #coolwoodburner #lordoftherings #witchking #fire pic.twitter.com/773KQwPDUE

Shark sculpture and prototype Jaws Burner, who's going to commission it 🤔👍🏻
Not a #coolwoodburner #jaws #shark #greatwhite #sculpture pic.twitter.com/JPjSG7H6H4