The Wild West outlaw was gunned down by Deputy Sheriff Pat Garrett in 1881. 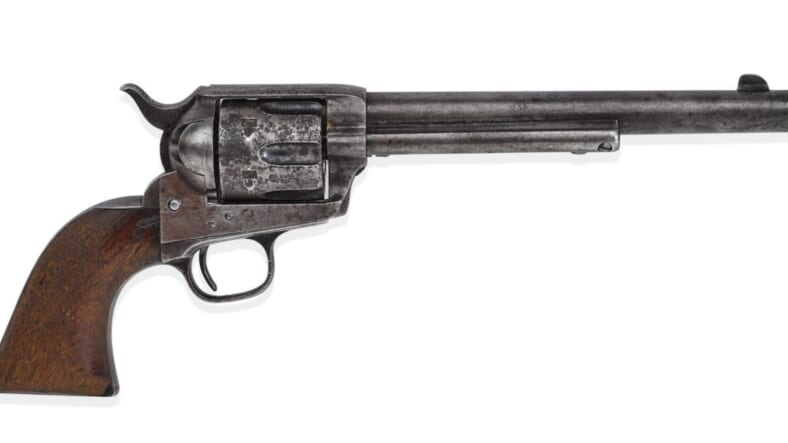 The gun that killed legendary outlaw Billy the Kid is being auctioned off by Bonhams this August. It’s an 1880 Colt Single Action Army Revolver “Peacekeeper” in caliber .44-40— an iconic sidearm in its own right that was used widely in the 19th century by everyone from ranchers to lawmen.

This example, serial No. 55093, features a 5.5-inch barrel, a crescent ejector, a D.F.C. stamp indicating approval from an Ordnance Sub-Inspector, worn walnut grips, and bluing on the barrel and cylinder flutes.

But the excellent condition isn’t what warrants an estimated auction value of $2-$3 million. It’s legendarily lethal shot fired by Deputy Sheriff Pat Garrett, who was reportedly close friends with Billy the Kid before he was recruited to track and capture the on-the-lam outlaw.

Garrett first nabbed Billy the Kid and his gang less than two months after being appointed Deputy Sheriff. This weapon, then-nearly new, was confiscated for use by Garrett from gangster Billy Wilson.

With a sentence to the gallows hanging over his head, Billy the Kid escaped from jail months later, killing two deputies in the process. But instead of fleeing internationally, he covertly roamed nearby the Fort Sumner ranch where he first met Garrett while the two worked together.

Rumors of Billy the Kid’s presence in the area led Garrett, John W. Pope and Deputy Thomas McKinney to the property. According to Garrett’s own account, he was visiting with the ranch owner in his bedroom when Billy  entered the dimly-lit room, unable to identify his friend-turned-pursuer. Garrett fired the Colt revolver once, hitting Billy the Kid in the chest and killing him instantly.

The gun is one of many legacy pieces being offered in Bonhams’ “The Early West” auction, including Wild Bill Hickok’s Springfield Trapdoor Rifle, beginning August 27. For more information on what to bid on, go here.