Ultra-Luxe Gifts For the Guy Who Has Everything

From $100,000 racing simulators to Slash-signed guitars. 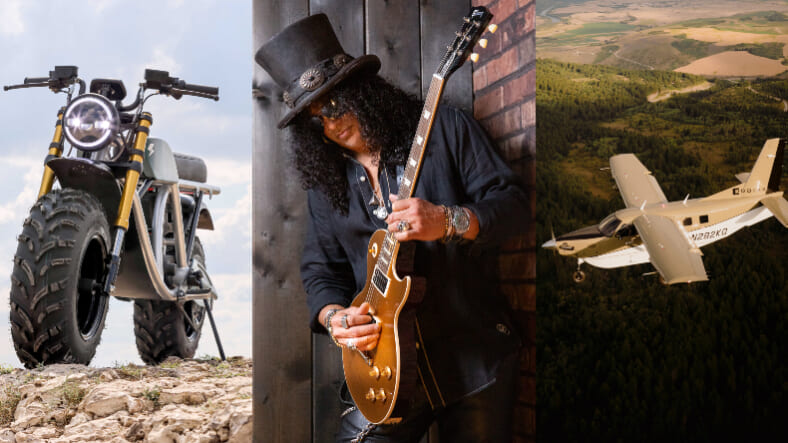 So far this holiday season we’ve shared gift ideas for all the whiskey nerds, epicureans  and aspiring athletes/health + wellness seekers in your life. But what do you get the man who has it all? We’ve rounded up over a dozen off-the-radar gift ideas from $100,000 carbon fiber racing simulators to Slash-signed guitars to otherworldly totems of desire like rare Scottish single malt barrels and hybrid boats that can skim on or under the water. Even vintage Land Rover Defender/airplane combos to explore the far corners of the planet with — we’ve got you covered.

Ideal for the man who wants to continue his work-from-home journey elsewhere, preferably from the comfort of his own private beachfront Four Seasons villa in Anguilla. Why the hell not? The over-the-top luxe package starts with a private flight via Tradewind Aviation that delivers his favorite 8 friends from Puerto Rico’s San Juan Airport to the Four Seasons Resort and Residences Anguilla which just reopened this month.

For 30 days they receive a personalized stay in a 6,000+ sq. ft. oceanfront penthouse designed by Kelly Wearstler, known for envisioning beautiful crash pads for everyone from Elton John and Cher to Gwen Stefani and Cameron Diaz. Accommodations on one of the Caribbean’s most beautiful islands include up to nine guests in three spacious suites with 180-degree ocean views, replete with gourmet kitchen and outdoor cooking area, al fresco shower, expansive private terrace with infinity plunge pools, and daily gourmet breakfast prepared by the resort’s executive culinary team.

Sure any celeb can get their greasy hands on a PS5 in time for the holidays, but Lil Yachty is just gonna play Gran Turismo Sport on a big screen TV like a common plebe. Not you — you’re gonna get the AMR-C01 racing simulator like a distinguished man of leisure.

For just a smidge over $77,000 you’ll get an Aston Martin-designed fully carbon-fiber monocoque chassis crafted with the exact same seating position as their Valkyrie hypercar, with all the electronic doodads engineered by Curv Racing Simulators (notably led by an Aston Martin factory driver who has over two decades working on Formula 1 sims). The idea is to offer a fully immersive driving experience packaged in a gorgeous, sleek shell to hone your skills for a bright future in Esports racing. $77,300

Dubbed “Queen of the Lowlands”, Bladnoch is the oldest distillery in the renown single malt region. Founded in 1817 by brothers John and Thomas McCelland, Bladnoch has recently been revived with the help of ex-Macallan Master Distiller Dr. Nick Savage, and just released an award sweeping 25-Year expression.

Now for the first time ever they’re offering private casks for purchase by single malt aficionados — surely the best part of which will be walking around the rickhouse with Dr. Savage and dipping toppers into ancient barrels to taste their wares. Only a half-dozen casks will be made available each year, and once purchased the buyer will elevate to VIP level, granting them access to future Bladnoch tastings, experiences and rare bottlings. $16,000 (Sale by referral only)

How’re you supposed to putter around your 40 acre estate, in a golf-cart like a peasant? How louche. Bugatti looks to address this ignominy by crafting a 75% scale replica of their most famous vehicle: the Type 35. Built in collaboration with The Little Car Company the Bugatti Baby II is a fully electric, impeccably designed homage to the most winningest racecar ever — complete with leather interior and loyal (but updated) touches like a charging port hidden in the fuel tank, and fuel pump-turned-gear switch.

But don’t be fooled: this Baby II is no toy — we got a chance to flog one in Blanc Vitesse spec on the famed Willow Springs Raceway in ‘speed key’ mode (where all limits are removed), and let’s just say at full speed on corners this thing can fly. The skinny tires, pencil wide track and legit speed mean you have to exercise some skill on corners or else. The base Bugatti Baby II starts at $36,600, but the Pur Sang with handmade aluminum body climbs to $71,400. Only 500 total will be made. $71,400

Corey Shapiro started his business 15+ years ago scouring the world for dead stock vintage eyewear. His success grew quickly to start working directly with celebrities, finding them beloved glasses exact in fit and style. Call him The Cartier Whisperer, as he soon became the Go-To Guy for all vintage frames. The next step? Why not start making your own — with all the quality materials luxury eyewear brands used to insist on before bottom line thinking and cheap manufacturing gutted the industry.

We’re talking real 24K gold, substantial frames and hinges, and even mineral glass lenses. For those looking to differentiate themselves from the Nikki Beach Club crowd try classic frames like Chanel Paris Combs, Cartier Bagatelles and 23KT Gold Guccis, the rarest stock glass ever produced with the original Gucci family house crest. Or pick up Shapiro’s own Godfather or the Full Cuban Snatch in real 24KT Rose Gold if you prefer VF originals. $1,000

Slash’s connection with Gibson — and specifically the Les Paul — is one of the most famous pairings in music history. Angus + SG, Clapton + Strat, Eddie + Frankenstein, you get the drift. So it’s no surprise one of the greatest guitarists of the era has enjoyed a three-decade partnership with Gibson, his Slash Collection being the first evergreen artist collection from the legendary American luthier.

The just-released “Victoria” in Goldtop finish might be his best and most beautiful yet: the solid mahogany bodied Les Paul features a gold maple top, dark back finish, BurstBucker Alnico 2 pickups and a vintage style hardshell case. As for Slash touches, look out for his “Skully” drawing on the back of the headstock and signature on the truss rod cover. $3,000

The motorized cherry on the sundae of adventure includes a visit to the Himalaya Experience Center in Alpine, Wyoming, where you’ll be able to partake in a slew of other backcountry experiences — including access to five brand-new customized snowmobiles and snow bikes to explore Wyoming on. There’s almost nowhere on the planet this combo won’t get you. $3,000,000

Inspired by the sleek high-speed trains from the 1920’s, H. Moser’s Streamliner Flyback Chronograph collection epitomizes minimalist elegance and namesake “Streamline” design via its gorgeous integrated steel bracelet. Just in time for the holidays the renown Swiss watchmaker releases the timepiece in their signature Funky Blue fume dial, a fitting coda for this year’s winner of the Chronograph Prize of the Grand Prix d’Horlogerie de Geneve. $43,900

A lot of things are going out the window in 2020 — one of the best/worst traditions being that awkward slog during Christmas to your hometown dive bar with high school friends you barely stomach once a year (at best). With the Anywhere Bar you can emulate that in the comfort of your back yard, but this time with people you actually care about.

The enclosed, portable Anywhere Bar comes loaded with a month’s supply of Five Drinks Co. canned cocktails, seating and tables for up to five friends, and is delivered direct to your home. There’s also a sound system included to blast “Come On Eileen” at 3 am to wake your neighbors from the dead, another awesome holiday tradition (or is that just us?). $5,500

Austin startup mobility company Volcon is aiming to provide zero emission off-road vehicles built in America. The four-wheel/four-seat “side-by-side” model won’t arrive until late 2021, but the two-wheeled Grunt will be rolling off the Texas conveyor belt as early as spring. The easy-to-ride all-terrain motorcycle was envisioned and designed for exploring the great outdoors, loaded with super fat tires (good enough for dunes), chain driven electric motor with 75 ft-lb of torque and 12-inches of ground clearance.

And since it’s electric it conquers in total silence and with zero carbon (unlike lovable but noisy dirt bikes). The battery pack is hot-swappable, meaning even if you reach the Grunt’s admirable 100-mile range limit you just have to pop in a new battery. And since it recharges in only two hours on any household outlet re-upping is a breeze. $5,995

Regardless of vaccines, road trips will still be the preferred travel for you and your pod for the coming year. That said, there is no more luxurious method of said travel than Bowlus’ Endless Highways Road Chief luxury travel trailer — a quarter million-dollar bespoke rolling home bolstered with enough battery power to go off-grid for up to two weeks.

Named for Hawley Bowlus, the man who designed the first riveted aluminum travel trailer in 1934 (not to mention Charles Lindbergh’s legendary “Spirit of St. Louis” plane), the gleaming Bowlus trailer would be outfitted to your exact specs with sustainable, yacht-grade features — including chrome and teak finishes, stainless steel counters, state-of-the-art electrical systems, a kingsize bed and a shower that extends outdoors for bathing au natural. $255,000

Ever wanted to play Pink Floyd’s “The Great Gig in the Sky” or Portishead’s “Mysterons”, but didn’t have a Theremin to actualize your very peculiar dreams? Legendary synth brand Moog has you covered with their brand new Claravox Centennial model, imagined to celebrate the twin-antennae instrument’s 100th birthday.

Want your kid to catch the motorcycle bug early, just like you did riding helmet-less on dad’s lap? America’s first motorcycle manufacturer, Indian, has finally released their first electric bike.

The Catch? It’s for kids 8-years and up (or grownup kids up to 175 lbs). Indian has taken their glorious FTR1200, shrunk it, and swapped the powerplant with a battery pack and electric motor to allow kids the chance to learn dirt biking while spewing zero carbon into the atmosphere. $750

One of the finest single malts in the world, The Balvenie, is releasing the third and final installment of its uber-rare FIFTY Series. The Balvenie Fifty: Marriage 0614 aged more than a half-century at their Speyside distillery in American and European oak casks, seven of which were hand-picked and blended by David Stewart — the oldest tenured Master Distiller in Scotland, and one of the most respected brains (and palates) in whisky — to create this liquid treasure.

The Balvenie Fifty: Marriage 0614 is bottled in a hand-blown 100% lead-free crystal decanter, and packaged with a gold certificate in a 50-layer wooden canister handcrafted of elm trees harvested from a nearby forest. Now that’s terroir. $40,500

If you prefer your adventures on — and under — water, you literally cannot beat SubSea Craft’s Victa hybrid watercraft. The 40-foot vessel skims over water at speeds up to 40 knots via 725-bhp Seatek diesel engines, offering all the joys of a day on a powercraft.

The categorical difference with this English-engineered and -built vessel being if you want to submerge — you know to dive across a coral reef, peep an octopus’s garden, or release divers for some secret mission to take over Richard Branson’s supermodel-filled Necker Island — you can. Using silent electric thrusters the Victa can dive up to 100-feet (30-meters) deep for as long as 4 hours of submersion, bringing all your James Bond fantasies to life. $9,000,000